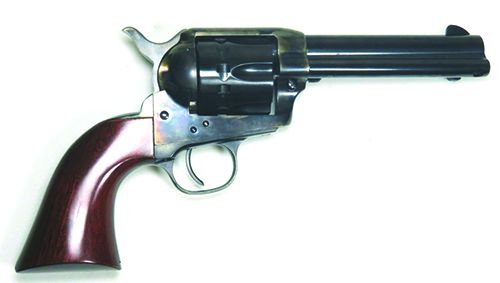 This was also a recent pre-Covid price at BudsGunShop.com. The Cattleman 22 is a traditionally styled revolver with all the heft of centerfire single action. Unlike the other rimfires tested, which have a six-round capacity, the Cattleman 22 has a 12-round capacity. At first glance, it looks like a centerfire revolver, but what gives it away are the extra bolt notches in the cylinder. Those extra bolt notches and six flutes give the Uberti a slightly unbalanced look. When the Uberti is cocked, you expect the cylinder to rotate more, but because this is a 12-shooter, the cylinder indexes slightly each time the hammer is cocked. We also noticed the front-sight blade is not as tall as the blade on a centerfire model. The operation of this Uberti follows the same operation as a traditional single action, except there are only two clicks when the hammer is cocked, not three clicks. The hammer needs to be at half cock to rotate the cylinder. Because the Uberti is based on the full-size centerfire model, the loading gate gives you ample access to two chambers at a time. There is also plenty of room for fingers to push the cartridges into the chambers, which are countersunk. There are a few other differences in this Uberti. First, there is no removable cylinder bushing. We also noticed a small firing-pin-sized notch machined into the recessed chambers. This notch allows the gun to be dry-fired without damage to the firing pin or cylinder. We thought this was a nice touch, but we still suggest you use either spent cases or 22 snap caps if you dry-fire a lot. The fit and finish were nicely executed. The bluing was deep and nicely polished. The case colors were not the brilliant colors we’ve seen on Uberti’s centerfire revolvers. They were mostly grays and blue. The grip frame and main frame are fitted nicely, and the one-piece walnut grips have a light varnish and are well fitted to the frame and grip frame. The grip is full size on the Cattleman 22, not scaled down like on the other two revolvers. Like the Cimarron, the Uberti has a manual lock safety. The Uberti uses the cylinder base pin, which has two notches around the muzzle end of the cylinder base pin. The rearward notch allows the hammer to fully fall. To use the safety notch on the pin, depress the latch button and push the cylinder base pin into the frame until you hear a click. That means the second notch is engaged and blocks the hammer from falling completely forward. This is a good idea when storing the revolver. You still need to carry the Uberti cowboy style, with the hammer resting on an empty chamber. We actually found that difficult to do because the chambers are inset, and you can’t see the cartridge rims from the outside the cylinder. We resorted to counting clicks rather when rotating the cylinder. The bullet has about 0.6 inch of chamber length before it reaches the forcing cone and barrel. We got no splatter. Going hot, we found the front blade and rear notch are both wide enough to actually see them well. The trigger pull broke at 3.3 pounds on average with a very slight creep. Loading and ejection were easy because the Cattleman 22 indexed the chambers with the loading gate in the frame. After thumbing back the hammer and squeezing the trigger, we found the Cattleman 22 gave us just under 1-inch five-shot groups. Many holes piled up onto each other. It shot to point of aim. Our best group was with 36-grain CCI Mini-Mags at 0.73 inches. The shot load gave us an 11.2-inch pattern at 10 yards. Use of the ejector rod was required to eject empty brass on all chambers. The ejector-rod head was crescent shaped and rotated away from the barrel when ejecting empties, so there were no singed fingertips from a hot barrel. The back edge of the hammer was rounded, and the checkering on the hammer allowed for easy cocking. The Cattleman 22 also field-stripped like a traditional single action. Our Team Said: The Cattleman 22 offers twice the plinking fun because it is a 12-shooter. Well made and carrying the heft of a centerfire revolver, this might not be the best choice for a small, newbie shooter. This is an adult 22. You will be toting some heavy iron if you are looking for a trail gun. The price reflected the time and effort in the finished product. Special thanks to Eastern Outfitters (EasternOutfitter.com) of Hampstead, NC, for their assistance. Written and photographed by Robert Sadowski, using evaluations from Gun Tests team testers. 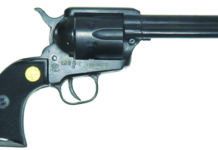