The Cowboy gun craze is still going strong. But after you have filled out your minimum required battery of lever-action rifle, shotgun, and long-barreled revolver, what’s next? Chances are you’ve been thinking of adding a revolver with a shorter barrel, such as a 3.5-inch model in the style that was purportedly favored by the local sheriff. Moreover, these single actions are increasingly favored in the .38 Special/.357 Magnum chambering, since those rounds are easier to shoot and cost less than many other specialty cartridges.

At Gun Tests we’re not just cold-hearted data-hungry technicians. No, we have our romantic side, too, and we hoped our test of three short-barreled .38s—EMF’s Hartford Sheriff, $365; and two guns from Cimarron Arms, the New Sheriff ($469) and another that sported a “bird’s head” grip called the Thunderer ($489)—would offer modern performance with Old World charm. Also, we attempted to test Uberti’s to-be-released Stallion model in .357, but we couldn’t get it in the right chambering, so we examined separately a comparable Uberti Cattleman in .45 Long Colt.

How We Tested
After an initial plinking session with the guns, we next tested these guns by firing them from a rest at targets 25 yards downrange. Our choices of .38 Special ammunition were PMC’s 148-grain lead wadcutter (LWC); the 158-grain jacketed soft point (JSP) and a higher-pressure (+P) round topped with a 125-grain jacketed hollow point (JHP).

It was at this point that we noticed one of the four test guns—the EMF Hartford Model—would not shoot any kind of group at all. To register hits on paper with it, we had to paste targets so that point of aim (POA) was mounted high on our target board in hopes that groups would be captured below. We measured hits about 1 foot low at 7 yards firing the EMF Hartford. The Cimarron Sheriff’s model liked to shoot a nice sub-2-inch three-shot group then send two shots into a 4- or 5-inch spread. Like with the Hartford, all of these hits were much lower than the POA. In contrast, the Thunderer with the bird’s head grip shot the best. The fourth gun, the .45 LC Uberti, required multiple hits upon the primer to fire a shot, so we just eliminated the defective gun from the test after taking note of how much different it was firing the larger .45 Long Colt in the short-barreled gun (which we describe in an accompanying sidebar).

When we found out how poorly the test was going with the three different .38 Special cartridges, we added a .357 Magnum round to help these guns along, hoping the longer magnum case would improve accuracy by bringing the bullet closer to the rifling of the barrel. Firing Black Hills’ 158-grain JHP in .357 Magnum did help accuracy in two out of three guns, but the Hartford remained unaffected. Of course, we noted many other positives and negatives of the guns as we went along, which we relate herewith:

EMF Hartford Sheriff
Our recommendation: We were apprehensive when we received the $365 Hartford revolver, which lacked an ejector. But empty cases shook out nicely. Too bad that in terms of accuracy, the rest of the gun didn’t work. Don’t buy it.

We have to admit one of our least favorite characteristics of single-action cowboy guns is ejecting spent cases. We like the ejectors even less on shorter-barreled guns because the ejector has to be manipulated around the cylinder rod instead of merely straight back. This is a feature that requires perfect alignment of the cylinder and loading gate to perform. But the ejectorless EMF Hartford required only a simple shake to rid it of empty shells. At first, one chamber was a little sticky and didn’t let go, but once we cleaned and oiled the gun, it was never selfish again. Even the magnums were eager to leave the cylinder.

Too bad the rest of this gun didn’t work as well. This is a handsome little gun that seems to be fit rather well. Why was it so inaccurate? For one, all but the Thunderer shot low, owing to front sights that are in character but too tall. That accounts for elevation error.

Also, tests with a match-grade range rod from Brownells showed each cylinder was out of time, but not severely. When testing for chamber-to-bore alignment, we couldn’t help but notice that the barrel didn’t exactly hug the surface of the rod as it traveled in and out. Thus, we noted a correlation in this test between the results of this range-rod test and accuracy. The most accurate gun was the Thunderer, which held the rod the tightest. The least accurate gun was the EMF. It actually allowed the rod to rattle in its bore. As you can see in the accompanying table, we didn’t compile accuracy data for the gun because it would not produce a coherent five-shot group.

Cimarron New Sheriff
Our recommendation: This $469 gun didn’t shoot as poorly as the EMF, but it wasn’t too good either. We’d pass on it in favor of the Thunderer.

After our test sessions, our range rod refused to pass the cylinder gap on three of six of the New Sheriff’s cylinders. It did so with a bump on two others, leaving only one that allowed a clean pass. The barrel was nice and tight, but poor alignment resulted in split groups of three and two plus a series of erratic hits. In particular, the 125-grain +P rounds hits were just everywhere. The New Sheriff settled down with the 158-grain JSPs, but it would fire two good shots then a flyer. Then, another flyer. Then another good shot. One group featured a 0.80-inch group of three with two flyers 3 inches apart. Another showed a 1.9-inch group of three hits with two flyers 5 inches apart. The 148-grain LWCs grouped about the same. If you fired eight times you could get a pretty good-looking five-shot group. We noted the same problem for the .357 Magnum ammunition. Of course, all of these hit way low and left. No wonder we had so sad faces in our crew.

We also noticed telltale bulges surrounding the indentation left by the firing pin on the spent magnum cases. At first we thought it was primer flow caused by excessive pressure, because the velocities produced by the .357 Magnum rounds were around 1,144 fps, more than 70 fps faster than what we saw in the Thunderer. We felt this higher pressure was caused by the cylinder gap, which was tighter on the Thunderer than on the other two guns. This gun’s cylinder gap measured 0.005 inch while the others accepted a 0.007-inch tool.

In terms of headspace (the gap between the breechface and the rear of the cylinder), measurements were 0.07 inch for the EMF Hartford and 0.065 for the Cimarron New Sheriff and Thunderer. Removing the cylinders from each gun revealed that the firing-pin hole on the New Sheriff was beveled outward, creating an oversized hole. Excess pressure from the cylinder gap may be contributing to this problem, but the deformation is a result of the beveled edge, we believe.

Cimarron Thunderer
Our recommendation: If you must have a Cowboy gun in this size class, this $489 model is the only we can recommend. However, if it were ours, it would see only light loads. As accurate and fun as it was, we doubt its durability.

The best parts about this gun were its grip and the care with which it was assembled. It had the best timing and cylinder alignment, and the checkered-walnut bird’s-head grip fills the hand. This makes the gun stay put, resisting the tendency to ride up in the hand. The way the frame and grip meld is a marvel in itself, adding to the pleasure of not only holding the gun but looking at it as well.

The gun grouped consistently with all ammo fired. Firing from all six cylinders produced five good shots and a flyer every sixth shot. Example: The 148-grain rounds measured a best five-shot group of 1.3 inches, but 3.5 inches for six shots. The Thunderer handled the +P better than the other guns with five-shot groups of 2.8, 1.4, and 2.2 inches. Even with its sixth-shot flyers, all groups measured less than 3 inches with this cartridge. The 158-grain JSPs averaged 3.2 inches per six-shot group. Firing .357 Magnums, all five-shot groups ballooned from 2 inches to 4 inches when adding the sixth shot in the cylinder.

Due to the short barrel, you’ll need to reposition the tab on the ejector rod to completely remove the base pin. With the loading gate open, the cylinder exits the right side of the frame. The only tricky part of reassembly is the hammer must be fully down before tightening the setscrew. Otherwise the hammer may not fall all the way. The rear sight is merely a notch in the top strap that is visible only with the hammer fully cocked. The front blade on all the guns proved too high for usable elevation on all the guns but the Thunderer.

Three of these guns (including the Uberti, reviewed separately) operate the same. To load them, the shooter opens the gate, rotates the cylinder, and the individual chambers click into place. To eject shells, the rod moves through each chamber as the tab is pulled down and back. Careful, though, because the loading gate does not disengage the firing mechanism, so don’t forget to shut it.

Gun Tests Recommends
EMF Hartford Sheriff’s Model, $365. Don’t Buy It. The quality just wasn’t there, in our estimation. It’s no fun to shoot an inaccurate gun even if it is outwardly appealing. We feel the combination of a poorly-cut barrel and sloppy assembly ruined this gun’s chances.

Cimarron New Sheriff, $469. Don’t Buy It. This gun didn’t produce consistent performance in our tests. The Thunderer is a much better choice.

Cimarron Thunderer, $489. Conditional Buy. You won’t find a more charming revolver in this barrel length, and it shoots acceptably well. Still, we’re not convinced of its durability. Also, its usefulness is limited, and we’d want to invest in a gun that had some sort of safety feature like Ruger’s loading gate, which does not require the shooter to move the hammer back to load the gun. As charming as these guns are, they represent a dated design that is inherently dangerous and not for beginners. 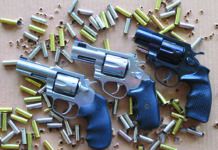 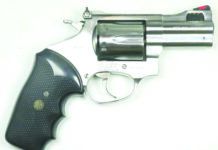