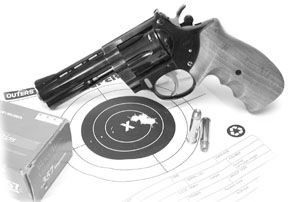 At Gun Tests we often speak of features and modifications that push the performance of a given design further up the pyramid. What is this pyramid and why is it so important? Atop the pyramid is where all parts combine to produce the greatest possible results. Often the ability to climb the pyramid is linked directly to money. Most guns hover about midway up the pyramid in performance, function and appearance because they are priced in terms of available markets, i.e. your pockets and mine. But what if a firearm was produced without a price point in mind? How much would such a gun (in this case a 4-inch combat revolver) cost?

[PDFCAP(1)] $4,700, comes as close to answering this question as any production gun ever has. The Korth is a six-shot double-action revolver with the option of single-action fire chambered for .38 Special and .357 Magnum in a package the size of the Smith & Wesson L-frame. To find out why this revolver costs more than four times as much money as the most expensive revolvers in its frame design, we tested a Korth, available from from Korth USA in Tewksbury, Massachusetts, (978) 851-8656.

The Korth gun takes about four months to build, mainly because 70 percent of it is assembled by hand in Germany. Plus, the Korth is not made from typical steel. We did get the Korth representative to utter the exact words describing the kind of steel used, but we agreed to use only the word “proprietary.” Most gun makers do not offer a hardness rating of the steel they use, but whatever this number in most case may be, it is likely dwarfed by the Korth rating of 60 on the Rockwell scale.

We found the blueing on the Korth to be both luxurious and strong. The key, we were told, was the preparation of the steel (another proprietary process) and hand finishing. One thing we can say is that the Korth stayed clean longer than any other revolver we have ever seen, and deposits of lead and powder seemed to leave the gun of their own accord. In fact, over the course of 300 rounds we never used a pure solvent to clean this gun. Maintenance consisted of applying a cleaner lubricant from Kleen Bore, Formula 3 Gun Conditioner as recommended by Korth. For scrubbing we used an oversized nylon bore brush (intended for .40 S&W). Everthing gleamed.

While the Korth uses a barrel of standard and not polygonal rifling as many European-built firearms favor, several other features are unique. There is but one visible seam on the frame of the Korth, just below the windage adjustment screw on the left side. However, you will have to look very carefully to find it. The matching of the ejector star to the rear of the cylinder is only slightly more obvious. The Korth revolver was completely devoid of any tool marks throughout. The chrome barrel protrudes from the jacket, which is fully underlugged and vented on top. The front sight is a long ramp design anchored by a chrome pin with fine serration to avoid glare. The rear assembly is a low-mount design and beveled on the edges to avoid snagging, but the sight picture was excellent.

The rear assembly is fully adjustable for windage with only minor adjustment available in elevation. The hammer tang is wide and serrated, but kept short and out of the way. The flat sides of the hammer and the trigger are finely machined and match other chrome accent points such as the ejector rod, crane release, frame pins and trigger adjustment screw. Yes, the trigger is adjustable from the outside the frame.

The grip is a Ken Nil product made exclusively for Korth. Ours was made of walnut, which is just one of 20 different available woods. The grip is held in place by a recessed screw and pins into the frame. It is a one-piece item, and though it favors the right-handed shooter with a thumb rest, the left-handed shooter will not find this feature to interfere in any way. Releasing the cylinder involves pushing forward the lever just right of the hammer. Careful fitting allow these two levers to seat next to each other without binding.

Another point of close tolerance is that of the cylinder gap. We measured the Korth’s to be 0.003 inch. Many revolvers leave the factory with a small space between the face of the cylinder and the forcing cone, but only the finest machining of the hardest metals will ensure that this gap will not grow over extended use. We could not discern any change in the gap over the course of our test.

Cleaning of individual chambers is made easier by removing the crane and cylinder assembly. On a common revolver, removing the crane is discouraged because each time this is done the strength of hold between the locating screw and the frame, if not the condition of the screw head itself, can be eroded. This can also lead to deterioration of the cylinder gap as well. To solve this Korth has devised a push button release system that maintains a consistent fit without relying upon the torque of a screw. The need for this system is the precursor to the availability of interchangeable cylinders that allow the revolver to fire more than one caliber. The face of the barrel lug also shows a fitting-plug, which releases the barrel shroud.

Korth is now developing multi-caliber revolvers for shooters in countries where people may not own many guns. Outside the United States, where the frame constitutes a firearm, it is the barrel and cylinder that are the defining parts. Whereas there is a limit to the number of firearms a person can own in Germany, for example, changing the barrel and cylinder is a loophole in the law that allows the owner to in effect own extra guns. In the meantime, being able to remove the cylinder without tools is a luxury.

But how far up the function and accuracy pyramids does all this technology put the Korth revolver? Pretty high, it would appear from our testing. We found three effective ways to fire the Korth. At the plate racks, you could pull the trigger straight through. At the bench rest, we tested 25-yard accuracy from both single action and also by staging the trigger. It would appear that this revolver was designed as if it were meant for Police Pistol Competition (PPC). This is an accuracy game that predates modern Practical Shooting and is still widely practiced today.

One firing technique is to find the last increment of double-action trigger pull and then begin a controlled press. The Korth is perfect for this technique. The trick is to put more finger than usual across the trigger and curl the tip back until it makes contact with the frame. Then finish the stroke with a slow press. We were able to master this technique without spending a dime on ammunition by dry-firing the Korth at the BeamHit home laser target system, (800) 232-6448. This mounts a laser device, fully adjustable for windage and elevation, into the barrel. A dot travels to the target screen each time the hammer falls. For pulling straight through, we held the gun so that little more than the tip of the finger rested on the trigger.

Our test ammunition was a mixture of old fashioned and some of the latest cartridges. By old we mean the standby .38 Special 148-grain lead wadcutter target round, in this case from Black Hills Ammunition. Also from Black Hills we chose the 158-grain .357 Magnum jacketed hollow-point. Our other two magnum choices were the Winchester USA 110-grain JHP and Federal Premium Personal Defense hollowpoints weighing 130 grains. We felt the Korth liked the faster, harder-cased jacketed ammunition better than the lead-topped rounds. After a long series of lead wadcutter shots, the Korth’s accuracy improved the more we shot the hotter jacketed slugs. We still managed to average 1.8-inch groups with the lead wadcutters and 1.9-inch groups with the 158-grain JHP cartridge. In terms of weight and design, these are two rounds from the earliest years of .38/.357 revolver.

The Korth is definitely a modern design, and it liked the newer rounds much better. Keeping in mind that the Korth printed five-shot groups that averaged under 2 inches at 25 yards across the board, its best performance was with Federal’s latest hollowpoint, and the speedy 110-grain bullet resulted in more than one sub-1-inch group. How hard is it to find performance like this in today’s 4-inch wheelguns? Long-barreled guns with target sights would have a better chance (GT May 1999, February 2001).

Gun Tests Recommends
Korth Combat Magnum, $4,700. Conditional Buy. This revolver is accurate, beautifully made, and will likely last a lifetime, perhaps several. But its cost is breathtaking. If you can afford it, we have no doubt it will please and delight you. If you can’t, we completely understand.