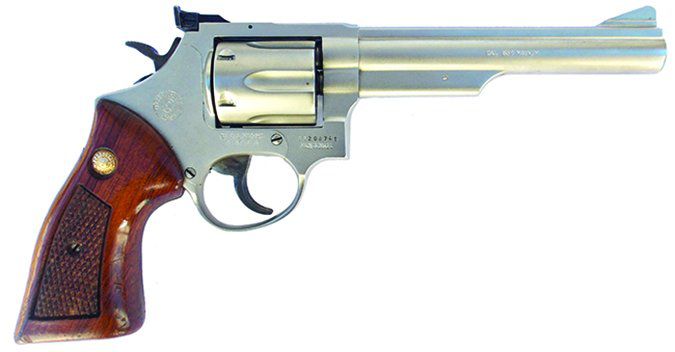 When we began testing the 4-inch 357s, we wondered if a longer barrel, such as the 6-inch Taurus 66 357 Magnum, might give us the best of both worlds. It is a K-frame revolver like the Combat Magnum, but a 6-inch barrel might give us good velocity and accuracy. We were disappointed in its performance. Still, we would have got our money’s worth for a modestly priced recreational and home-defense revolver.

This is an older Taurus with a finish sometimes called Starvel. It is attractive and seemed none the worse for wear, even though the revolver is at least 10 years old, perhaps 20. We evaluate it separately here because the barrel is 6 inches long. One of the raters likes long-barrel revolvers, and he predicted the Taurus, with adjustable sights, would be a good performer and might outdo the 4-inch guns in a couple of areas. That turned out not to be true, which is the point of testing.

While all of the revolver sights were adjustable and provided different sight pictures, we really had no clear preference in rear sights. We liked the integral front sight on the Taurus the least because the light finish sometimes caused the front sight to fade from our eyesight, despite there being a striation on top of the rib between the front sight and rear sight. The Taurus locks up in the same manner as the Smith & Wesson with an ejector rod under the barrel in a protected housing. The trigger face is smooth and similar to the Smith & Wesson M66. The grips are attractive hard wood with nice checkering in the middle of the grips and good finish. The grips did not quite meet in the front, but it was a slight mismatch. They had a few dings, and they should have after their years of service. The double-action trigger was the heaviest of the revolvers tested. We estimated 16 pounds because the weight exceeded the range of our scale. The single-action trigger was also heavy at 6.5 pounds. The revolver locked up tight and did not show signs of wear or abuse.

The Taurus performed okay on the firing range, but it was behind the Ruger and Smith & Wesson revolvers in combat shooting. The long barrel pointed well with good balance. However, the double-action trigger was not the smoothest and seemed to have a rough spot. This did not allow us to achieve good results. The revolver was comfortable to fire due to the large grips and the long barrel limiting muzzle blast, which can be punishing with the 357 Magnum cartridge. Using 38 Special ammunition, the revolver was accurate, and hitting small targets wasn’t difficult in single-action fire. We expected better accuracy during the bench rest test because we were able to do well in offhand shooting on the 25-yard berm, but the Taurus was not an accurate revolver by our standards. Some of the groups were twice as large as the GP100’s best groups, and none equaled either of the Smith & Wesson revolvers. Velocity was also the lowest of the test with all loads, a surprise because long-barrel revolvers usually exhibit greater velocity than 4-inch-barrel revolvers. Spent cartridge cases ejected without any problem. There were no excess pressure signs.

Our Team Said: Compared to the other revolvers, the Taurus was definitely not in the same class of performance. It was the least expensive by a considerable margin, however, and was reliable. We did not like the heavier trigger action or the relatively poor accuracy. Still, for those on a tight budget, it would serve for recreational use and home defense.