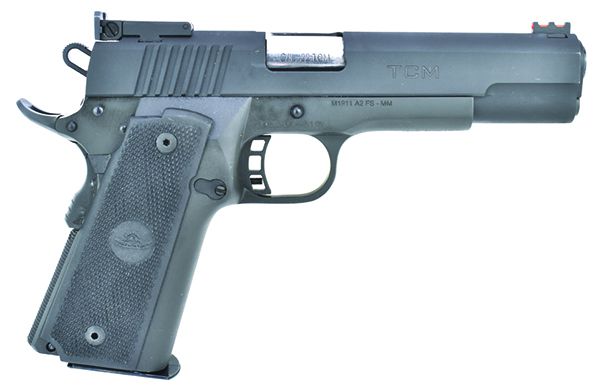 The Rock Island 1911 produced the best times on two of the three speed drills and displayed the best accuracy with the one type of ammo we could secure for testing. The workmanship was excellent.

Movies take us back in time, and so does this pistol. Everything about it, down to the cuts in the frame for the wider trigger bow and the tabs on the grip panels, scream 2nd Generation Para Ordnance to us. And that is a good thing. Rock Island Armory has taken the same concept and produced a pistol with some incredible versatility. With the right barrel (we didn’t order the conversion unit with our sample), you have a full-sized double-stack 1911 that holds 18 rounds of 9mm. There is an alternate barrel that allows the shooter to also use 22 TCM, a bottleneck-case 22 caliber that goes screaming out of a pistol barrel at about 2000 fps. It’s definitely a different cartridge type and shape, but it has even more energy than the 5.7x28mm, hence its inclusion in this test. 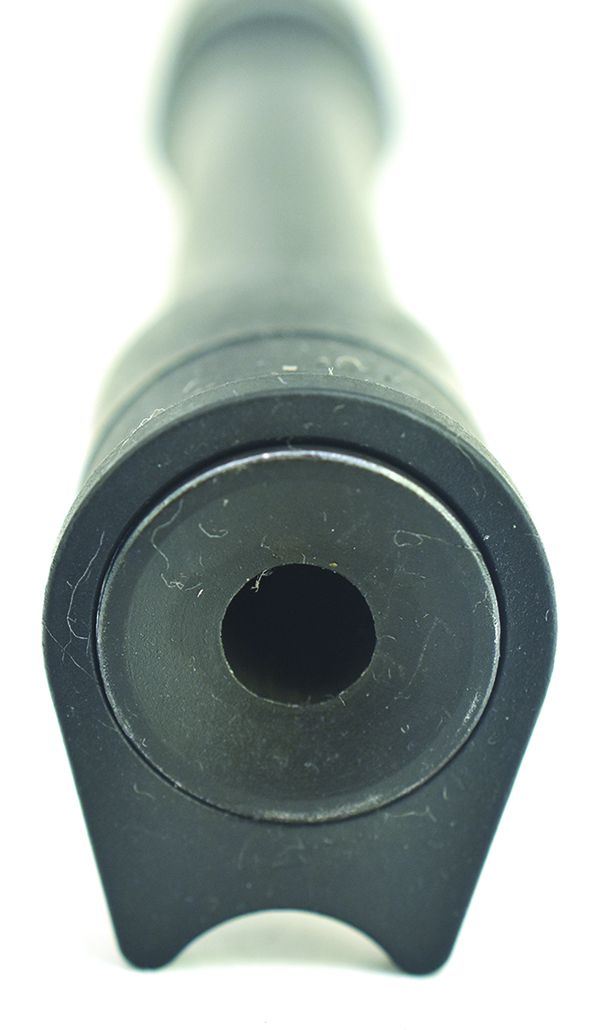 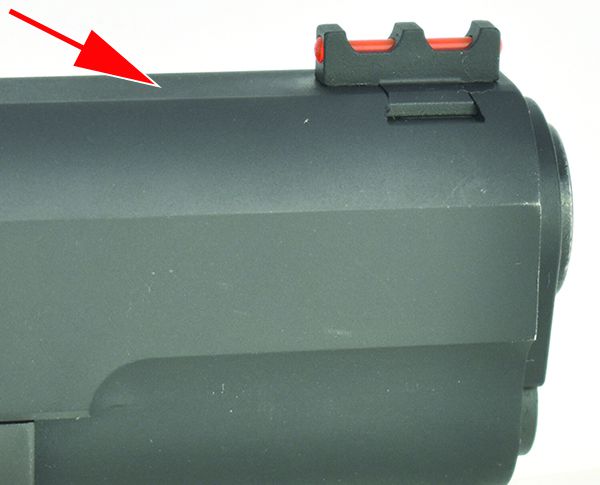 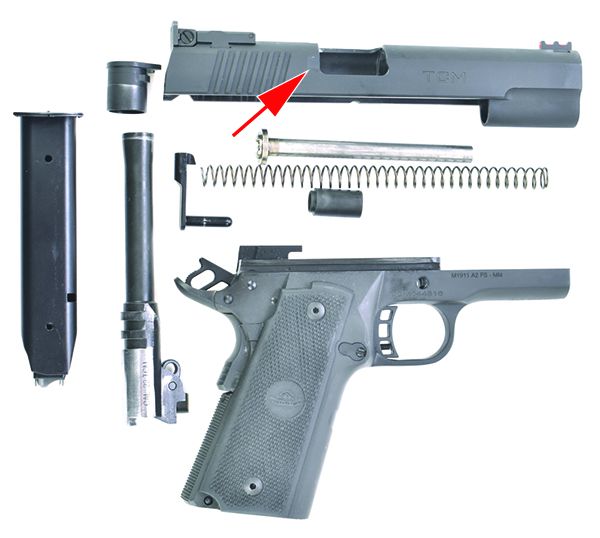 The Rock is a true “70 Series” firearm. The ejection port has been lowered and teardropped.

Inside the Rock Island we found a solid-steel pistol on a double-wide body. Metalwork was nicely done.

Here’s another look at the internal machining quality, this time on the slide. 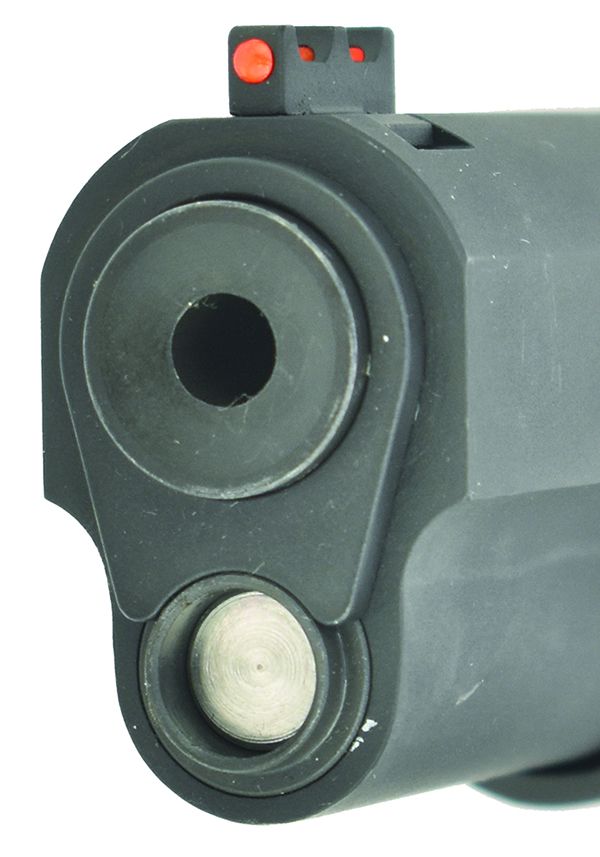 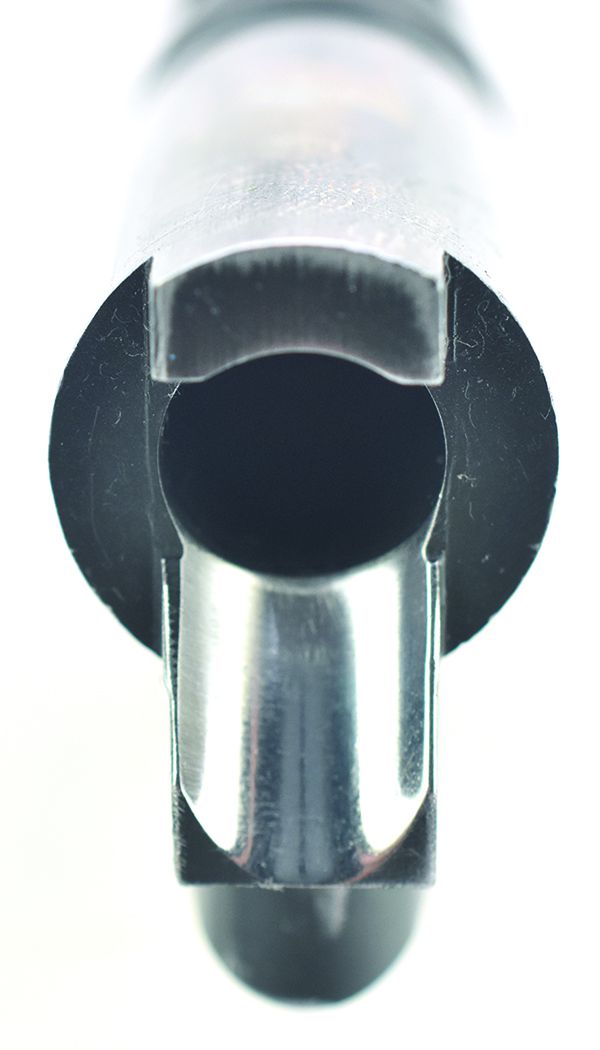 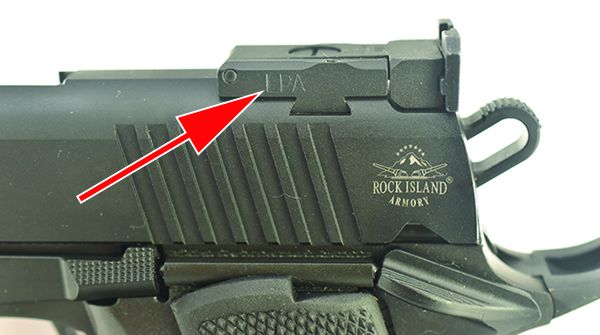 The rear sight is fully adjustable. Marked “LPA” on the left slide, it resembles a Bomar. 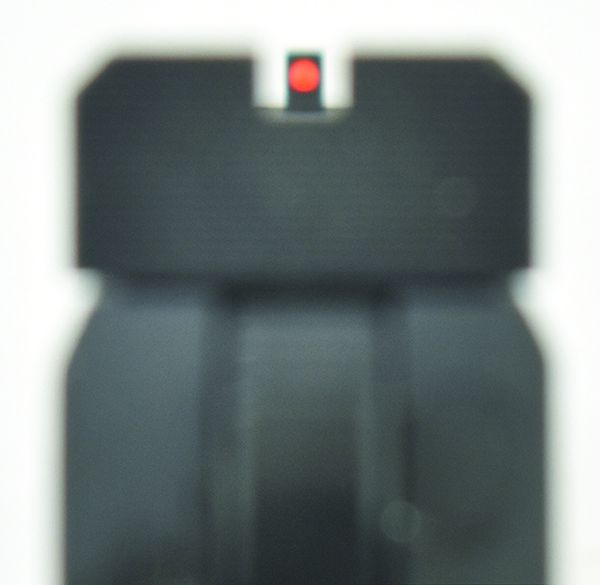 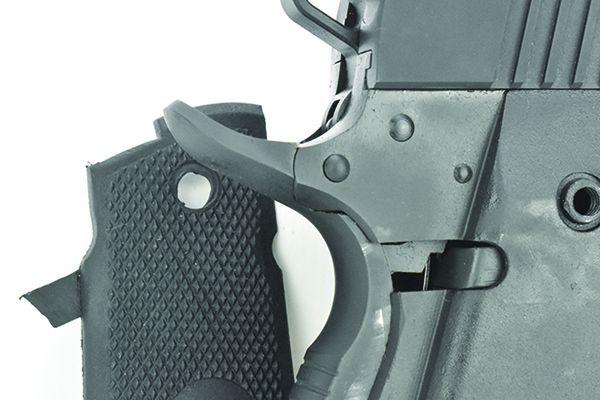 The similarities of the RIA and an old Para Ordnance are easy to see with the trigger bow cut and the tabbed grip panels.

Armscor, the parent company of Rock Island Armory, opened up shop here in 1985. Its corporate lineage dates back to 1905 in the Philippines and has been involved in the making of firearms under current ownership since 1952. The company is currently one of the top producers of 1911-platform pistols in the world, much of which is exported. According to reports we’ve seen, Armscor currently supplies the base pistol for excellent products, such as STI’s Spartan and Cimarron Firearms’ pre-1923 models.

The Para Ordnance was earth shaking during its time. Back in those days, if the shooter had a 1911 chambered in 45 ACP with an eight-round magazine, he was at the cutting edge of self-defense technology. Then came the 38 Super, still in the 1911 platform, with one or two more rounds, and the arms race for capacity was on.

Eventually, two smart guys from Canada (Ted Szabo and Thanos Polyzos) figured out how to produce the first “fat-frame” 1911 and feed it with double-stacked magazines that carried a lot more ammo. Eventually, other companies, such as STI and SVI, introduced their own fat frames that used polymer on a steel chassis to attach to the upper assembly.

Our Rock Island fits the early pattern perfectly, with a solid-steel pistol on a double-wide body. Weight totally empty was 41.0 recoil-taming ounces. Width on our sample was 1.40 inch, which is about one-eighth of an inch wider than a single-stack Colt 1911. Reach to the trigger, measured from the compressed memory pad of the grip safety to the front strap was, amazingly, 0.005 inch less than on a Colt. With standard grip panels on the Colt and factory-thin panels on the Rock Island, grip circumference for the RIA was only 0.5 inch greater. That does not require you to give up much to double the ammo capacity.

The solid-steel slide is 7.4 inches long with grasping grooves at the rear only. The curves at the top of the slide have the standard contour, but the top of the slide has a flat milled along its entire length. The front sight is a nice red fiber optic, well protected and its housing mounted in a dovetail cut in the slide. The rear sight is adjustable for windage and elevation. Marked “LPA” on the left slide, it bears a very strong resemblance to the Bomar sights we knew and loved in the past. The rear blade face has been serrated to cut down on glare, and the normally square tips have been removed to keep the shooter from slicing his hand during a malfunction clearance. Shooters will notice the lack of a firing-pin safety on Rock Island pistols. These are true “70 Series” firearms that rely on lighter firing pins and heavy springs for drop safety instead of mechanical linkages. As we would hope, the ejection port has been lowered and tear-dropped at the rear of the port. Both are signs of attention to detail on a good pistol. Lockup on the barrel was solid, allowing virtually no movement. We noticed the barrel bushing was pretty tight and found that, while the barrel was not what we would call a bull barrel, it was indeed flared at the muzzle and fitted snugly to the bushing. The barrel proper is fully supported with a ramp that was nicely polished.

The frame mounts a slotted Commander-style hammer and a well-fitted beavertail safety. The “memory bump” on the grip safety was not as generous as we prefer. This can make it a bit more difficult for someone with smaller hands to leave the thumb properly on the safety and still be able to deactivate the grip safety. The thumb safety was very positive in its application, but the ledge was, again, small — another factor that contributed to some difficulty in properly working the safeties. The skeletonized trigger was relatively short, which helped with the longer trigger pull that stems from the thicker grips. Compression was very good at an average of 3.4 pounds with very little take up or overtravel. The mainspring housing is checkered and the magwell is beveled. The recoil spring, guided by a two-piece rod, is very light and makes for a slide that is very easy to rack. With very little recoil, this could be a very interesting pistol for people with hand-strength issues.

Our Team Said: This is a large-ish pistol, and we felt that its size (and small hands on some of our testers) required just a couple of tenths of a second more on the first speed drill to deactivate the thumb safety. That small delay cost the Rock Island the win on one of the three drills. Times on the splits were great no matter what the exercise. Muzzle flash was substantial, with the fireball being visible to the shooter in bright sunshine. While we recognize penetration might differ, the Armscor ammunition generated energy in the same league with good defensive 9mm offerings.