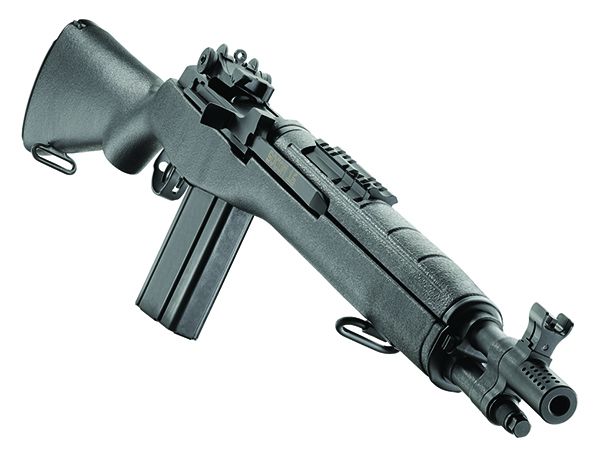 Hi guys. I enjoyed the June 2020 article on the three shorty Garand-based rifles. Back in the 1970s and 1980s, we were a Springfield Armory dealer and sold a ton of receivers to the USMC High Power program. They were just seeing a few M14 NM rifles, and most had NM M1 Garands released from the Army. Our club got a dozen NM M1s, which we eventually had to share with the VFW for honor guards. Their blanks were corrosive WWII grenade-launching rounds, and they never cleaned them. Seven out of 12 rifles were ruined.

The Marines at Quantico did have access to all the bells and whistles required to build an M14 NM, and many a happy Marine wound up with excellent M1A NM rifles made by their armorers. We got personally-owned NM Garands, and they got personally owned M1A-NMs.

Which brings us to the M1A-A1. Our club armorer and I had access to any and all pieces and parts we needed for the M1-As, as well as complete rifles from plain Janes to M1A-NMs. Dennis Reese sent us some experimental and surplus parts to play with, and we built an oddball M1A with their new shorty 18-inch barrel assembly and a Beretta-made folding stock. To use it as a thick-woods hunter and a target rifle, we drilled out the rear-sight aperture and threaded it for Marble sight-aperture inserts. We also did some sights threaded for Keihen, Mikuni, and Chevrolet fuel jet apertures. Pick your aperture or leave open for an Enfield-sized aperture. The assault-rifle ban dropped the curtain on us.

Short barrels make a fun toy, but they have real-time problems. If within three shooters of a shorty barrel in a High Power match, small stones and dirt would jump up 4 inches in front of you when they fired the shorties. You also got a heavy muzzle blast from the blossom of fire from their rifle. When fired in thick leafy woods, the leaves in front of your shorty would jump and dance with each round. Not so with the full-sized M1A. When firing it prone on dusty ground, you would have to wait for the dust to clear before the next round, making you a useful target for any enemy. My Desert Storm students complained about their shorty M16s for the same reasons. Length of barrel is tied to the length of the round. You have to have enough barrel to burn up all the propellant, or you will create a sand grenade in front of you. Thanks for your time, and a great magazine. — Mark

Re M1 Carbine for Self Defense

I have always thought that the M1 carbine would make a great home-defense rifle. They are light, maneuverable, with little recoil. While deploying a 30-caliber bullet, it is of lower velocity so as not to overpenetrate as much as other 30-caliber cartridges. The problem is finding one that is reliable. To my knowledge there are three sources: used, Inland, and Kahr. Being in possession of an unreliable used government carbine, a couple years ago I bought one of each from Inland and Kahr. I was underwhelmed by the quality of each. I would appreciate you investigating the matter and would be interested in your findings.  — Thomas, a lifetime subscriber

Hey Thomas, thanks for hanging around for the duration. We agree, the M1 Carbine is an overlooked home-defense choice. In the April 2018 issue, we wrote: “Our Team Said: Fans of the M1 30 Carbine among the raters were discouraged, or perhaps enlightened, by the practical comparison of ratings for ammo, magazines, and accessorizing. That is what we do, and the older platform’s limits are reality. But in practical handling, the M1 Carbine came into its own. The rifle is lighter than the AR-15 and somewhat easier to store. It takes up less space and is less likely to catch on furniture or be a problem in deployment from concealment. The safeties are each easily operated, with the lever-type safety of the M1 being fine for combat use. The AR-15 safety is a model of ergonomics and wins on that point. However, we like to keep defense rifles (and shotguns) at “home ready,” which in this case is ammo and magazine loaded in the rifle, but with the chamber empty and the safety set to Fire. Thus, to get the firearm into play, the home defender simply uses a gross motor skill and racks the action, and it’s ready. In making the rifles ready fast, the M1 is a clear winner.” I’d encourage you to look at the article because it also had a Value Guide of six M1 Carbines we’ve evaluated from Inland, Auto-Ordnance (Kahr), Fulton Armory, and a CMP-2 Inland. Good M1 Carbines are out there. Also, a Carbine from the April 2018 issue, an Israeli Arms International M1 30 Carbine pictured above, got an A grade. — Todd Woodard

After reading your “Downrange” article, I watched for the changes you mentioned in the article. I like what you’ve done with the magazine, and it is easier to compare guns the way you are doing it now as well as putting the detailed images next to each other. I feel showing why a particular gun got a B or below is still helpful without going into great detail, as you did with the Browning round on page 30. Just a short summary will do. I still like the “Our Pick” and the “Best Buy” notes that you put in the review. Also, please continue the “Our Team Said” notes at the end of the article. I find those very helpful. — Mike

Always look forward to reading your latest articles. I found the data on the 10mm handguns to be very good and useful, and the same for the breakdown 22 rifles. I’m writing today about ammunition in general. Once again, we are faced with (apparently?) a demand that has completely outstripped supply and manufacturing capacities. Every popular ammo that many of us shoot regularly, such as 9mm Luger, 38 Special, 40 S&W, 223 Rem., 22 LR, 45 ACP, etc., are virtually nowhere to be found for sale, and if they are, they are listing at prices that range from 5x-12x what they were six months ago. After our last experience with this a few years ago, we were told by many ammo manufacturers that this “could not happen again, because we have increased capacity so much.” I would appreciate any analysis or feedback in Gun Tests. Seems like a rerun of our worst nightmare. — Marc

Hey Marc: You are so right — previous ammo shortages should have taught gun owners to steadily buy ammo, and I believe many shooters have done that. I’ve advocated that the cheapest way to have enough ammo on hand is to constantly shop for items on sale, and keep enough on hand for your uses. This current shortage has a double whammy that we’ve not seen before. The COVID-19 outbreak has idled some manufacturers, not just of cartridges themselves, but also materials suppliers. So the entire supply chain has been affected, leading to shortages. Also, many people now see the police may not come when called. So they’ve bought guns for the first time. Can’t say that I blame them, but a few million new gun owners need to feed their guns. — tw