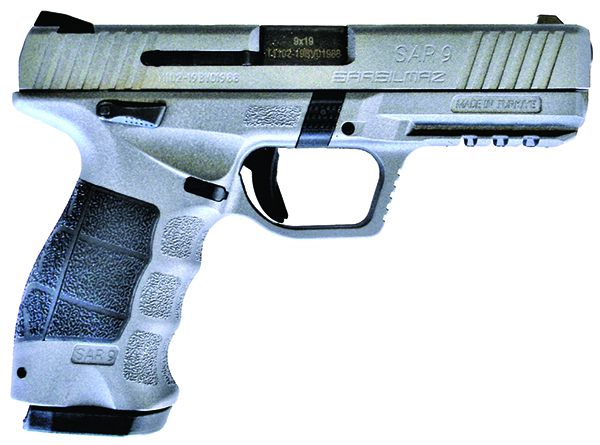 The price reflects an in-stock price in mid-February 2021 at ClassicFirearms.com. The pistol is often found in gun shops at $439 average. The SAR9 seems to be more available than the other two, but this may change any moment. A rater found a dozen SAR9 pistols in a two-county area in North Carolina, four Shadow Systems pistols, no Tisas, and a single Glock just prior to publication.

The SAR9 looked familiar due to the combining of several design elements from Walther, HK, and Glock. The result is a pleasing pistol. The Sarsilmaz SAR9 is a conventional striker-fired polymer-frame pistol. The price is attractive in these times of standby pistols in short supply. The pistol’s slide is similar to the Glock but with forward cocking serrations and a beveled muzzle end for easy holstering.

The SAR9 pistol’s sights are the standard three-dot arrangement with white inserts. They are good sights, but we do not like them as much as the more expensive Shadow Systems pistol. We rated them above the Tisas. Sarsilmaz recently won a military contract for more than 100,000 of these pistols, so the piece has been vetted if this is the same contract handgun. No reason it should not be. The finish appears to be a grey Cerakote. More common are black-finish versions.

The pistol operates in the same manner as a Glock. Rack the slide to prep the action. Then a long trigger press both cocks and drops the striker. The trigger isn’t as light as the MR920’s, but it breaks at 6.0 pounds even. The bifurcated trigger features the usual safety lever set in the trigger face. There was a red-marked part of the trigger that was visible when the trigger is prepped. While it has the same break weight as the Tisas, the SAR9 action feels smoother.

The pistol has an ambidextrous safety. Whether added for function or for import points, the safety was positive in operation. Some will like having a manual safety, and some will ignore it, and others will criticize the safety. In any case, it is positive in operation, and because it is frame mounted, it is easily manipulated. The addition of a safety to the design makes the SAR9’s action more Glock-like than the Tisas, but not identical.

Out front, the pistol features a light rail molded into the frame, an element it shares with the other pistols. The SAR9 is supplied with two magazines. They are sometimes listed as 15 rounds and sometimes the capacity is specified as 17 rounds. We found that considerable effort is required to load 17 rounds. Otherwise, the magazines are quite easy to load without a magazine loader. The final two rounds are a bear to load even with a loader. For most of the test we simply loaded 15.

Fired on the same combat course as the other pistols, the SAR9 was controllable and recoil was comfortable. We rated the pistol more comfortable to fire than the other two pistols. Fast combat shooting was good, but not quite as good as the Shadow Systems pistol. Due to the more comfortable grip and better trigger, we rated the SAR9 pistol over the Tisas pistol by a margin. Combat shooting was in the same class as a Glock according to the raters, but it was not in the same strata as the “improved Glock” standard set by the Shadow Systems pistol. But then, the MR920 is considerably more expensive than the SAR9.

Firing from the benchrest using the MTM shooting rest, we found the pistols were all accurate enough for personal defense. Just the same, we like more accuracy if we can have it. The SAR9 was more accurate than the Tisas but not as accurate as the Shadow Systems pistol. With groups averaging 3.0 to 3.5 inches at 25 yards, the SAR9 pistol was accurate enough for defense use.

Our Team Said: We could get by with the Tisas Zigana for personal defense — but we would spend the extra money for the SAR9 if we had the funds. We rated the pistol down a half grade for its heavy trigger. We debated whether to knock down the SAR9 another half grade for its difficult-to-load magazines, but some raters felt that strong magazine springs are an advantage. In the end, we judged the SAR9 a Best Buy.

All groups were fired using a MTM gun rest from a benchrest firing position at 25 yards. The groups were fired in strings of three five-shot groups for each load in each handgun. Velocity was measured using an RCBS Ammomaster Chronograph at 10 yards.