The Taurus M44 brings many of the changes S&W decided were good for its guns. This genre of handgun tends to spend much of its working time in the outdoors, in inclement weather and in sweaty holsters, making stainless-steel construction preferable to blued carbon steel. The Taurus M44 uses brushed stainless on almost everything we could see, except the sights. Those were blued to help cut down on the glare. Though not luminescent, the front sight has a stripe of red/orange paint that was very visible. The rear sight is matte black with no rear outline (which we prefer), and it was adjustable for both windage and elevation. 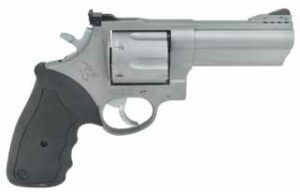 The barrel is a medium profile with an almost full-length underlug to lessen muzzle lift. The cylinder locks up in two places. The location at the rear of the cylinder is fairly standard, but the second location is a wedge on top of the crane that lines up in a detent in the frame. Lockup is solid with no discernable fore and aft movement. We always check timing on revolvers to make sure that the bolt locks into the notches before the hammer is released forward. Timing on the Taurus was perfect, with the bolt rising into the notch with an audible “thunk” each time the cylinder is rotated with the trigger.

As with the S&W, the hammer spur is checkered and the trigger is not, but both units on the Taurus are somewhat narrower than on the Smith. The cylinder release is an angled/checkered piece on the left side of the frame that pushes forward to allow the cylinder to swing out. When opened, the ejector had plenty of length to help the shooter dump his empty cases. The firing pin on the Taurus is frame mounted. The M44 allows the user to lock the hammer, rendering it unusable, if so desired.

Grips are listed as being made of “soft rubber,” though they didn’t feel that soft to us. Still, they were a lot softer than wood and are designed to cover the backstrap of the grip, giving a bit more cushion to the hand. The panels are a thinner type with a decent palm swell in the middle. The grip profile reminds us of Pachmayr grips, and the pebble grain reminds us of the Hogues on the Model 29. Perhaps the grips are a bit too thin. Those skinny grips seemed to guide the recoil back into a fairly narrow part of the hand, making the recoil impulse pretty noticeable.

The grips aren’t the only thing the Taurus uses to mitigate the 44’s recoil. The M44 has four ports on either side of the front sight near the muzzle. They help, perhaps more with muzzle flip than straight-line recoil.

The Taurus averaged a very respectable 2-inch group across the three types of ammo. The times for the speed drill were a hair slower on the Taurus than on the S&W. We should note, however, that the S&W had had its trigger worked, and that the Taurus trigger was not so improved. We think part of the credit for the Taurus’s near tie in speed drills was the job those eight ports did in holding down muzzle flip.

Our Team Said: The ported muzzle worked well to reduce muzzle flip. The M44, even with the factory trigger, came close to matching the S&W Model 29 on the speed trials. It wasn’t quite as accurate, so we bumped the grade down a little.

How would we choose between these two? If you expect your handgun to live its life outside in inclement weather, the Taurus M44 is the easy choice. Its stainless finish is much more utilitarian than the gorgeous blued Model 29. Also, availability gives the Taurus an edge if you want to find a competent sample to put into use immediately.

If you want Model 29-like design elements in a modern stainless sample, then the Model 629 163603 is probably the gun you want. But for use in controlled environments against mostly two-legged adversaries, we would start looking for the right Model 29-x. These were well-built handguns from the get-go, and all nostalgia aside, our gun (if well cared for) would be just as good on its 100th birthday as on its 50th. You just have to be patient and determined to find the right match at your local gun store or online.