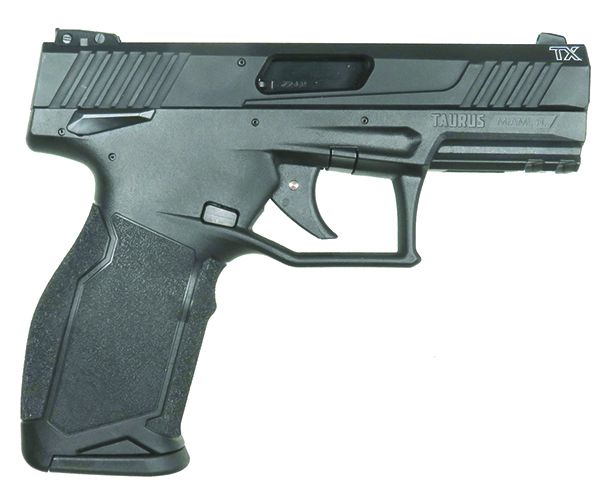 The TX22 is a full-­size grip, polymer-­frame, blowback-­operated, striker­-fire semiautomatic with a single-action trigger. That sounds like a lot, and we found the TX22 does offer a lot of plinker for the money. In the box, along with the pistol, Taurus includes two polymer magazines, a magazine loader and a suppressor adaptor. The suppressor adaptor is a very cool component and eliminates the need to buy a threaded barrel to use a can, such as in the case of the Glock.

The TX22’s barrel is flush with the end on the slide but wears a thread protector. We required a 3⁄8-inch wrench to remove the thread protector and then installed the adapter. You can then screw on a can.

The slide is made of aluminum with forward and rear angled serrations along with a chamfered muzzle. The top edge of the slide is similar to CZ P-10C-series or SIG Sauer P320-series pistols.

The receiver is polymer and has a grip that reminds us of an HK VP9 or a Walther PPQ. We like this grip. The girth is thin, the surface of the side panels and straps is a smooth sandpaper-like texture. The beavertail is long. A ridge is formed with the trigger guard that guides the trigger finger toward the trigger. The ridge is also the same height as the magazine catch. We thought the magazine catch could have been slightly larger, but that’s nitpicking. The magazine button is reversible. While the grip is exceptionally comfortable, the manual thumb safety is difficult to operate without breaking your grip. We’d suggest a larger lever.

The slide stop on the Taurus is smallish but was easy to manipulate with the firing hand or support hand. We found the magazine to be easy to load. The follower did not require a lot of effort to hold, but we did encounter some cartridges vertically falling into the magazine, which was the operator’s error. The magazine loader helped ensure the tiny cartridges were loaded correctly.

Going hot, we experienced no issues with Remington Thunderbolt ammo. In fact, this inexpensive ammo gave us the best group out of all the pistols and ammo, a five-shot cluster measuring 0.43 inches. The TX22 could really shoot the black out of the center with this ammo. Blazer ammo averaged 0.87-inch groups. We also experienced failure-to-feed jams with the Winchester ammo, but when we did get it to run, our best group was 0.75 inches and it averaged 1.04 inches. We also experienced light primer strikes with the Federal ammo, but when it did run, our best group measured 0.51 inches.

The Taurus TX22 offered little felt recoil, as you might expect. The thin, full-size frame made it easy for large-hand shooters to operate as well as average to small-hand users.

Our Team Said: For the price, the TX22 offers a lot of performance and value with the suppressor adaptor. We felt the trigger was easy to master, and we found ourselves having a lot of fun shooting the TX22. Some thought the look of the TX22 was a conglomeration of other pistol styles, so it isn’t the most elegant. We think this would make a great training pistol as well as a great plinker.

To collect accuracy data, we fired five-shot groups from a bench using a rest. Distance: 15 yards with the with open sights. We recorded velocities using a ProChrono digital chronograph set 15 feet from the muzzle.