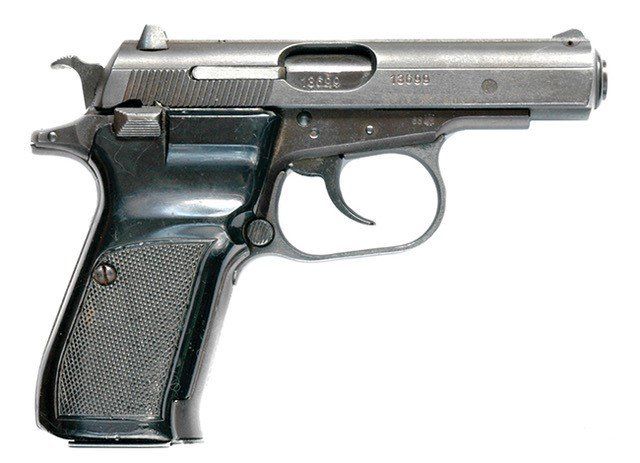 What many concealed carry consumers do is use Gun Tests grades and write-ups to identify problems and things to look for when purchasing a firearm. But the final decision has to be made by the buyer, because a gun should fit the shooter like a pair of well-worn shoes. That requires very personal decision-making for the CCW licensee. With that said, here are five handguns I believe stand out above the others if you’re looking for a handgun with modest recoil.

You’ll have to find this one used, because it was discontinued in 2012. This 380 caliber test gun was slightly used, had modest bluing wear on the sides of the slide near the muzzle, and a few other signs of light wear. The all-steel frame gave this gun somewhat more weight than most 380s, a factor for concealed carry concerns. We got accuracy groups on the order of 2.5 to 3 inches at 15 yards. We were impressed by the intricacy of this design. It wasn’t beautifully finished inside, but the work was well done and extremely sturdy looking. There were no problems at all with the gun. It fed, fired, and ejected perfectly. Again, we had fun shooting it fast, so if you buy one of these, be sure to stock up on ammo because we think CCW shooters will like shooting it, too.

The function of the firearms in this test were as portable, concealed carry self-defense guns, and their sights weren’t made to win matches. How much aiming does a concealed-carrier with a 380 caliber handgun have to do with a bad guy 15 feet away? Lasers made us able to shoot them on par with much bigger guns. When we added a Viridian Green Laser R5-G42 Reactor to the G42, it unquestionably helped our shooters’ accuracy. This laser model automatically ignites instantly when drawn from a supplied leather and polymer holster. Additional holster options are available from many holster manufacturers.

The Kimber, tested in September 2015, featured three-dot sights with tritium inserts, a big advantage on a 380 caliber concealed carry pistol. The Kimber uses the internal extractor common to other 1911 handguns. However, the Kimber does not use a grip safety. In this design, with a pistol bordering on tiny, a grip safety would have been difficult to incorporate into the design. The frame of the Kimber extended in a generous beavertail tang that aided in comfortable firing. The pistol disassembled much the same as any other 1911, except that the pistol featured a metal one-piece guide rod and wound recoil spring. The Kimber also uses the angled camming surfaces of the Browning type instead of the 1911 swinging link. When the pistol is disassembled, there is a loaded spring under the slide stop to maintain pressure on the stop. Reassembly isn’t difficult, but attention must be paid to the small wire ejector, which must be depressed. The Advocate showed superior fit and finish, had tritium sights, and a spare magazine. It would have earned an A grade except for its too-heavy trigger.

In the October 2016 issue, “380 ACP Shoot Out: Ruger LCP Takes On Remington, Rock Island,” we noted we have tested several iterations of the LCP 380 in the past. In the June 2008 issue, the inaugural version of the 380 caliber graded an A-. In the July 2013 issue, the #3701 model ranked a B+, the same grade as a Ruger LCP-LM No. 3718 with laser earned five months earlier. Then in the January 2014 issue, we tested a laser-equipped LCP-CT, fitted with a Crimson Trace red laser. It earned an A- grade. In the Custom version recommended here, the sights and trigger action are the primary improvements concealed carry consumers will want that earn it a slightly higher grade than previous versions.

Tested in the August 2016 issue, this got a Grade A ranking from our testers. It is not a pocket pistol by any means, but in benchrest accuracy testing, the Rock shot a best group of 2.0 inches effort with the blistering hot Black Hills Ammunition 60-grain Xtreme Defense at 1250 fps. The Baby Rock is by far the most comfortable pistol in this list to fire from a bench. The 380 caliber Baby Rock is a true miniature 1911. The pistol features a plunger tube on the frame and also uses a grip safety, something the other small 1911 handguns do not. The slide is machined from steel. The extractor is an external type. The ejection port is generous. There are two sets of cocking serrations front and rear. The forward set is smaller but effective. The sights are excellent for a small pistol suitable for concealed carry.

The Colt Mustang Pocketlite .380 Auto was available in blued or stainless finish while it was made. The all-steel Mustang was available in three finishes: blued, stainless, and nickel. The Pocketlite was introduced in 1987, and its all-steel brother a year later. Colt’s made the guns for a little over ten years. They were discontinued when the Colt company decided to concentrate on military contracts a few years ago.

Because of their usefulness as being among the smallest pocket-carry weapons in a meaningful caliber, both types of Mustang remain very popular. Prices for good samples of the Colt Mustang and Mustang Pocketlite may be expected to continue to escalate, and these Colts ought to be good collectibles in the long haul, in our opinion.

A Quartet of Pocket Pistols from SIG Sauer, Glock, Kahr, and Colt

Pocket Pistol Pair-Off: We Test A Set of .380 Surplus Handguns

The PPK/S is a double-action-first-shot pistol. A long press of the trigger both cocks and drops the hammer. The slide then cocks the hammer for subsequent single-action shots. A slide-mounted decocker safely lowers the hammer from the cocked position. This lever also acts as a safety. When manipulating the safety, it wasn’t difficult to reach the lever to move it to the Safe position, and it wasn’t difficult to use the decocker to lower the hammer. The grips gave adequate purchase. Earlier PPK pistols had a reputation for the slide cutting into the palm of the hand. We did not experience this. The double-action first shot of the pistol was heavy at 16 pounds, normal for the Walther PPK series. The single-action press was crisp enough at 6 pounds. The sights are smaller than the other pistols, which is a drawback. Walther lists an XS replacement sight set on its website, which would likely improve this pistol’s overall grade a full notch if installed.

Walther Announces Relaunch of the Classic PPK and PPK/S Pistols

A Trio of Pocket .380 ACPs: Steer Clear of NAA’s Guardian