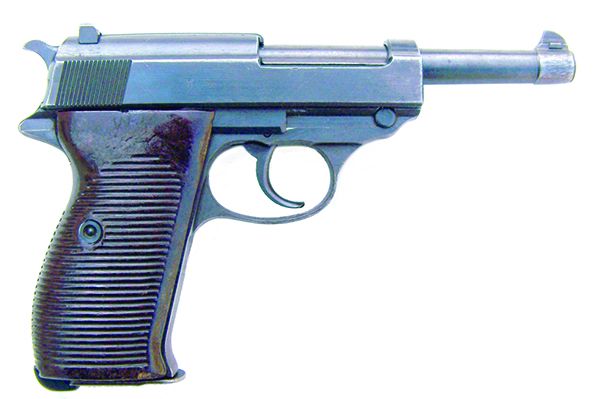 The Walther P38 is the most modern design of the pistols tested, a tremendously influential handgun. In most particulars, the long-serving Beretta Model 92 9mm is a modified high-capacity variant of the Walther P38. The Walther used the oscillating wedge lockup first used on the Mauser M96, setting the pistol apart from most handguns. The Walther uses an outside drawbar to transfer energy from the trigger to the hammer. The trigger is pressed and the hammer is drawn to the rear and the pistol fires. As the slide recoils, the hammer is cocked for subsequent single-action fire. The open-top slide recoils against twin frame-mounted recoil springs. The pistol features a heel-based magazine release, unique among the pistols tested. The magazine catch almost seems odd among the Walther’s modern features. The P38 features a slide-mounted decocking lever/safety similar to the one designed for the Walther PP series. This safety is pressed to lower the hammer safety from the cocked position. The pistol may be carried on Safe or on Fire, the latter simply relying on the long double-action trigger for safety. The safety lever is long and easily manipulated, far easier than the modern Beretta 92. The 92’s safety is a bit stubby, and the wider frame of the Beretta makes operating the safety a bit more difficult. The pistol features a loaded-chamber indicator in the form of a pin that extends from the rear of the slide just above the hammer.

The Walther tested is a Mauser variant in good working condition. It isn’t like new and shows signs of use. The pistol was carefully checked, paying close attention to the locking wedge and safety operation. The P38 seemed to be in good condition. Modern handguns of all types used in competition have proven to need spring replacement, magazine replacement, and even extractors replaced after five to eight thousand rounds. So, we were willing to make allowances with an 80-year-old handgun that might need respringing, but as it turned out, the Walther functioned flawlessly. The two original magazines were easy enough to load. The magazine catch was secure, if the slowest to operate.

When firing fast combat drills, we used the double-action trigger at 7 yards. It is heavy, considerably heavier than what we are used to in modern SIG and Beretta handguns. In single-action fire, the 4.25-pound trigger pull was another matter. We liked this trigger and found combat firing results were excellent. The double-action first-shot trigger was unnecessarily heavy, we felt, but the single-action trigger was best of the test. Compared to the need to cock the Luger before firing and cock the hammer of the Radom before firing, the P38 had the advantage. In bench accuracy, the P38 was the most accurate handgun tested. With the SIG Sauer FMJ load, the P38 turned in one exceptional 2.0-inch group. This is an accurate handgun. Reliability was 100% with all loads, including the Remington Golden Saber JHP.

Our Team Said: The P38 is well proven and perhaps underrated. The steel-frame Walther P38’s performance surprised most of the raters. The pistol handles well. The limiting factor is a heavy double-action trigger. However, many of the raters noted that the pistol handles better than the modern Beretta 92 as far as grip size and safety manipulation. A good, solid P38 that is proofed for function might be a life saver.