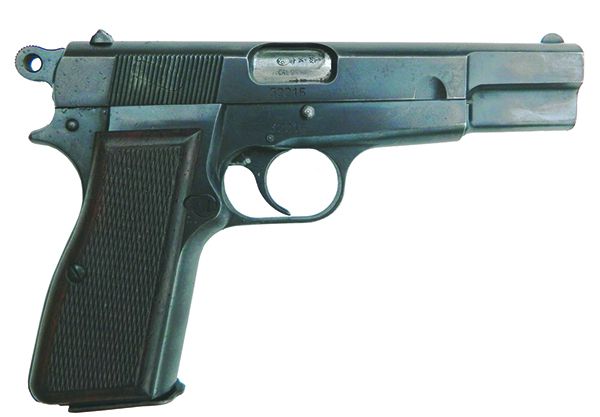 Browning recently discontinued the Hi-Power as a cataloged item. The only remaining Hi-Power still in production is a Turkish clone. The FN Hi-Power pistol we tested was introduced in 1935.

The Hi-Power (Grand Puissance) or P35 was designed as a French military sidearm. They passed on the Hi-Power and adopted the MAS 35, a lightweight 7.65mm pistol. The Hi-Power has been the object of much discussion because it was designed by John Moses Browning. Some feel it was intended as an improvement over the 1911. We don’t think so, although obviously a decade between design work would lead to changes in how one looks at a handgun. The Hi-Power was simply designed to meet European standards and not to replace any other handgun. In some ways, the Hi-Power was designed for less expensive manufacture than the 1911. Without a grip safety and with no separate barrel bushing, machining steps were fewer. The Hi-Power is an all-steel single-action pistol that incorporates a 13-round magazine into the design. The pistol features a small safety that allows cocked-and-locked carry. An odd feature is that the safety may be applied when the pistol is on half cock. The Hi-Power also incorporates a magazine safety into the design that prevents the pistol from firing if the magazine is not inserted. The pistol tested is a rather nice pre-war to early WWII pistol. It is an exceptional handgun in many ways and more expensive than many others. The sights are small military types, no better than the Radom and not as good as the P38. While Hi-Power sights were improved much later, these would not have been on dufflebag guns. The trigger is a heavy 8 pounds. Our Hi-Power gunsmith has been working these pistols for three decades and notes this is a typical war time Hi-Power trigger. The hammer is also difficult to cock, so difficult that it cannot be easily cocked on the draw. Some raters required two hands to cock the hammer. Also, it is very difficult to rack the slide unless the hammer is cocked first. The heavy hammer spring was intended to always fire off-spec 9mm cartridges. As a result, 9mm fodder has been produced around the world in many different conditions, and the Hi-Power is reliable with most anything you feed it.

Takedown is simple. Rack the slide to the rear, lock the slide by pressing the safety into the takedown notch, and remove the slide lock. Lower the safety and allow the slide to run off the frame. Remove the recoil spring. The pistol is easier to field-strip than the 1911 and only slightly more difficult than the P38. The pistol uses locking lugs and angled camming surfaces in common with the Radom.

On the firing range, the Hi-Power performed well. The pistol was drawn while cocked and locked. While the safety is small, it isn’t as difficult to handle as some would have you think. It isn’t as efficient as the modern Browning Hi-Power MKII, but it can be worked reasonably well with practice.

Drawing and getting on target, we pressed the trigger firmly and smoothly to the rear to manage the heavy pull. At moderate range, the pistol performed well.

In combat firing, the Hi-Power and the Radom were nearly equal. The Radom had the better trigger, but the Hi-Power was faster into action. The Luger pointed well, but lost its advantage at longer range. The P38’s heavy trigger action limited its speed to an accurate first-shot hit. The Hi-Power never failed to function with all three test loads.

In bench accuracy, the Hi-Power trailed the P38. We felt that a combination of small sights and a heavy trigger was the impediment to accuracy, with the trigger action most heavily criticized. Still, the pistol exhibited decent accuracy. The most accurate loading was the Remington Golden Saber, with a 3-inch group.

Our Team Said: We liked the Hi-Power. It is the only one of the four pistols that could be readily upgraded into a modern defense handgun with a bit of effort. A trigger job, improved sights, and a speed safety could be easily obtained. Magazines are plentiful, and so are holsters.

However, we graded the pistol as it stood, as an example of a dufflebag gun circa 1945, and it came up short compared to the Walther. The Hi-Power features a grip that fits most hands well and offers modest recoil. The heavy trigger of the example tested is as heavy as any single-action pistol we remember testing. Reliability and accuracy are acceptable, but not up to the standard of most modern 9mm handguns and Hi-Powers of more recent manufacture.