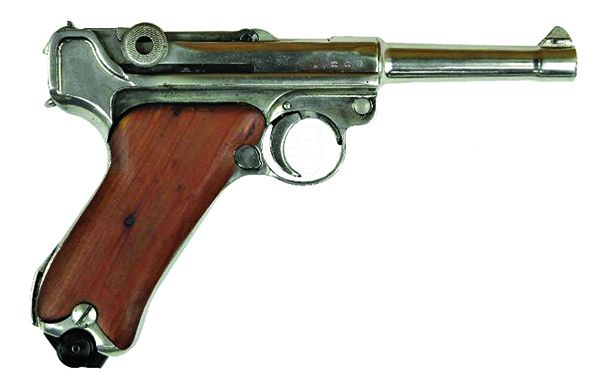 For many years, the word Luger has conjured up visions of the best made, best fitted and best finished of all handguns. The pistol is intricately made, well designed and completely breathtaking to use and fire — when it functions. The Luger has been represented in the marketplace as a collector’s item, a item to be hoarded rather than fired. This is unfortunate because the pistol was designed to be used. This is the oldest design of the four pistols tested, going into production at the turn of the previous century. The Luger was last manufactured during WWII. There have been attempts at clone guns. The Mauser Parabellum was a reasonably well-made handgun of the type; others were poorly made. During most of the time the Luger was being manufactured, it was an expensive handgun.

Prior to World War I, when a Colt revolver could be purchased for around $30, the Luger cost $60. The pistol was manufactured by the giant DWM in Berlin. The unique toggle action is very strong. Mechanically, the barrel would blow before the action. The eight-shot detachable magazine was considered superior in practical and combat terms to the common fixed magazines found on the Mauser 1896 and other pistols.

Advantages of the Luger design include a 110-degree grip that offers an excellent natural point. The pistol’s sights are higher profile and more precise than most other pistols of the day. The trigger, while odd to modern shooters, is sometimes crisp. The magazine release is a modern push-button design. Takedown is accomplished by a lever on the frame.

In many ways, the Luger P-08 ushered in many modern pistol features and design. A safety lever on the left side of the frame is pressed forward to fire. The safety is connected to a bar that blocks the sear. Still, the consensus is the pistol should not be carried with a round in the chamber.

The toggle action is familiar to those who may have field-stripped a Winchester 1873 rifle. The toggle operates like a knee. The pistol fires and the bolt moves 13 millimeters to the rear. The toggle hits a cam in the frame and the knee opens. The barrel stops on a block in the frame as the bolt continues to the rear and the spent cartridge case is extracted and ejected.

We have tested several Luger handguns over the years. Even with full-power 9mm FMJ ammunition, few could be counted on for reliable function. Those that have proven reliable were usually refurbished to an extent. The pistol tested was a World War II version, produced in late 1941 so among the last Luger pistols. While any collector interest has been destroyed by a previous owner who had the pistol nickeled, the Luger was in excellent mechanical condition. The pistol has had the springs replaced by a new set from Brownells.com. Many Luger magazines are old and tired, and the magazines in our test were new-production Mec-Gar builds. Interestingly, one of the magazines fell apart during the test and was promptly replaced on warranty. The new Mec-Gar magazines and modern springs had been obtained by the owner of the handgun and certainly added to the pistol’s showing. The Luger can be a reliable handgun when properly set up and maintained.

The Luger pistol and its many variants are among the most confusing of handguns to research, so we won’t drill down too far on that and will instead focus on how the handgun performed.

Production of the Luger halted in 1942. In common with all German firearms of the time, quality deteriorated in the later production, but not to the extent of the late-war Walther pistols. Shooter-grade pistols in good condition demand a thousand dollars or more, so choosing the Luger pistol isn’t for the faint of heart.

Its shooting characteristics are interesting. The first impression is of balance. The pistol is among the best balanced of all time. The handle sets at a 110-degree angle to the receiver, practically perfect. Trigger reach is quite good, even for those with short fingers and small hands. The toggle action requires some effort to actuate, but it’s nothing the average adult cannot handle. The sights are small but precise when lined up properly. The trigger action is different from most, but it’s crisp and usable.

The Luger demands a certain pressure curve in the 9mm rounds it likes. Interestingly, the Luger will feed virtually any nose style of bullet, including wide-mouth JHP bullets or hard-cast lead semi-wadcutter (SWC) bullets. The test Luger was examined, deemed safe, and with the new springs and magazines, seemed fit for range testing. We began with the SIG Sauer FMJ loads. In fast shooting at close range, the natural feel and point of the Luger are an advantage. However, the handgun failed to fully cycle 11 times during the test. When firing the handload, which generates a little more velocity and has a higher power factor, function was 100%. With the Remington hollow-point load, the pistol had four short cycles, and it had seven stoppages with the SIG Sauer FMJ loading. In accuracy testing, the sights were blacked with a magic marker for greater clarity. During firing, the pistol’s good balance in combat firing didn’t translate to accuracy from the bench. One rater remarked we tested the other three handguns in original condition, and we were bending over backward for the Luger, and perhaps this is true. We were simply attempting to test the pistols fairly and to provide a comparison of four service handguns and how they would have performed in their heyday. In accuracy testing the Luger was accurate enough for most uses with a best group of 1.9 inches at 25 yards. The rest were larger.

The takedown procedure of the Luger pistol was ahead of its time. There are handguns in use today that have shadows of this influence. To disassemble the Luger, first triple check to be certain the handgun is not loaded. Next, press the barrel to the rear slightly. This allows the takedown lever to be rotated 90 degrees downward. The locking plate will be released to fall off. You press the barrel forward, and this assembly comes off the frame. To separate the toggle and the breech block, push out the connecting pin.

When reassembling the pistol, be certain that the coupling link does not hang into the magazine well, but instead drops behind it in line with the link lever.

Our Team Said: In the end, the Luger is best relegated to your collection or the occasional range session. If you are aggravated by occasional misfeeds or short cycles even in re-built handguns, the Luger isn’t for you. The Luger pistol is interesting, but it is the least practical of the handguns tested.