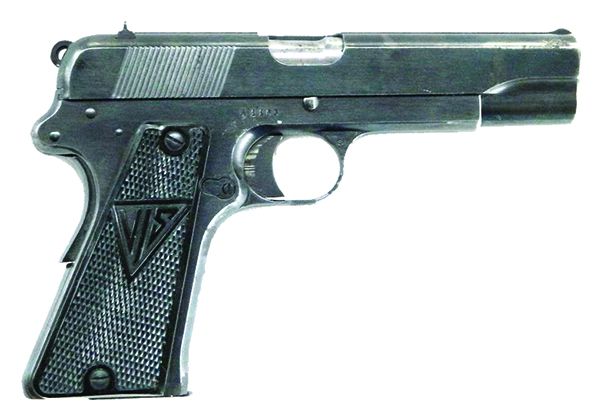 We gauged the price of the Radom by looking over several of the larger websites and assessing our pistol’s condition against the published prices. After World War I, Polish leaders realized that they could no longer rely upon foreign arms supply to defend themselves. An arms factory was established at the city of Radom in 1925 and by 1930, work was underway on a standardized pistol. The Radom Vis 35 (for the prototype date of 1935) is a single-column-magazine single-action pistol in 9mm Luger. The designers, Piotr Wilniewczvy and Jan Skrzpinski, produced a pistol that relied upon proven Browning principles, but which also offered improvements in some areas. The first pistols were marked on the left side of the frame with the arsenal name, F B RADOM. The date of manufacture, from 1936-1939, was also marked, along with VIS – wz 35/PAT NR 15567. The Polish Eagle emblem was set between the markings. In 1935, the original pistol was subjected to rigorous tests, including firing some 6,000 rounds of ammunition.

The magazine holds eight rounds. The lockwork is a single-action design. A unique feature is a decocking lever mounted on the slide, a rarity among single-action pistols. The pistol is cocked by swiping the hammer across the riding pants in the published doctrine. The pistol was issued to the Polish cavalry, among the last of its type in Europe. The sights are adequate and typical of the time, but they are not as well designed as the P38. The pistol locks up with locking lugs located on the barrel in Browning fashion and uses an angled camming surface to unlock at the bottom of the barrel.

The pistol features plastic stocks with the initials VIS on the right panel and FB on the left grip panel. The Radom is a remarkably clean and robust design. Wartime pistols are NAZI marked with the German eagle. Toward the end of production, workmanship was crude with little polishing and unmarked grips, typical of all European handguns used by the Wehrmacht.

There are good features that are obvious to a trained shooters. One of these is the grip angle and hand fit. The pistol feels similar to the Colt 1911, and the grip is smaller in circumference than the Browning Hi-Power’s. The slide rides low above the hand in typical Browning fashion. This low bore axis results in a good firing angle and limited muzzle flip. There is simply little leverage for the muzzle to rise. Compared to the 1911, the angled camming surfaces are more modern and require less machine work. Other contemporary pistols that relied heavily upon Browning design features, the Tokarev TT 33 and the French MAS 35, retained the original Colt-type barrel-link pin. The Radom, in common with the Browning Hi-Power, uses a fixed rather than a separate barrel bushing and angled locking surfaces for lockup. The pistol also features a captive guide rod and spring. The full-length guide rod is a desirable feature in modern handguns and is a rugged and reliable addition to this 1930s handgun.

Just as the cavalry was a highly influential part of the American Army during the 1911 pistol trails, the Polish cavalry had great influence on the Vis 35 pistol. The grip safety was considered important. If the pistol were dropped, the grip safety would immediately engage and prevent the pistol from firing, possibly injuring the cavalryman who dropped it or shooting the horse. Another concern was that after firing the pistol in combat, the soldier was left with a cocked pistol. Lowering the hammer manually by the use of the thumb while pressing the trigger was something to be avoided, so the Poles added the modern decocking lever. When the decocker is depressed, the firing pin is moved forward and a steel block is moved into place. The sear is tripped and the hammer falls to rest. The decocker does not act as a safety; rather, it is spring loaded and returns to position after the hammer falls.

After a thorough function check, the Radom was deemed safe to fire. The long bearing surfaces and the barrel hood, as well as the cocking block, were lubricated prior to the range test. The trigger broke at 8 pounds, stiff, and not very smooth, but consistent. The first few rounds were cautiously fired below eye level into the berm. Perfect function. We used three loads in all four of the pistols. These included the SIG Sauer Elite 115-grain full-metal-jacket (FMJ) bullet, a handload using the Hornady 124-grain FMJ over enough Unique powder for 1160 fps average, and the Remington Golden Saber 124-grain jacketed hollow point. We fired 50 rounds each of the ball rounds and 20 rounds of the Remington JHP in the initial testing, then fired five-shot groups at 25 yards to test bench accuracy. For more action-oriented shooting, we fired the pistol at steel plates at 15 yards and silhouette targets at 7 and 10 yards. The slight curve in the grip frame makes for good comfort and control. The pistol feels secure in the hand and the balance is ideal. At 10 yards, it was not difficult to center a rapid-fire group in the X ring. Range work confirmed that the pistol is combat worthy. Notably, the Radom features a dished-out portion in the front of the grip strap that allows for very fast magazine changes, a modern feature almost out of place on this handgun. Firing the Radom from a benchrest was more of a struggle than with modern handguns. A heavy trigger and small sights did not help accuracy. The handload was worked up by one of the raters as a load that will function in any pistol or carbine of any type, and it performed well, with a five-shot group of 3 inches average. The SIG Sauer 115-grain FMJ averaged 4.5 inches and the Remington load, 4 inches. This was the least accurate handgun tested.

Our Team Said: The Radom seems ideal for its intended use as a cavalry pistol. The handgun was made ready by cocking the hammer on heavy riding breeches and could be easily and safely decocked on the run. The pistol is accurate enough at modest ranges and feels good in the hand. A specimen in good condition is pleasant to fire and reliable. The full-length guide rod and cut out for speed loading the magazine are modern features. Feed reliability wasn’t an issue. We rated the pistol down a full grade for poor accuracy and another half grade on needing to cock the hammer before using. This limits its use for personal defense, we believe. Spare parts are difficult to find, and the pistol isn’t practical for most of us.