Todd, I found this review of 10mm pistols interesting and informative. I came close to buying one — even though the choices here in California are very limited. But I wound up converting my Kimber 45 ACP (5-inch barrel) to 460 Rowland and have been very happy with that decision. It is now my carry choice when in bear country. It would have been interesting had you tested a 460 Rowland alongside the 10mm pistols. Perhaps in a future edition of Gun Tests? Keep up the great work! — Russ

Hey Russ: We do venture into the realms of highest-power handguns occasionally, the last time being in the January 2006 issue, when, much the same as you did, we tested drop-in barrels that can turn your 1911 45 ACP into a hot 40 (400 Cor-Bon) or a hotter 45 (460 Rowland). At the time, the drop-in barrels from Storm Lake in 400 Cor-Bon ran $130 and $275 for the 460 Rowland from Clark Custom Guns. About the 460 Rowland we said, “The brainchild of Johnny Rowland, TV outdoors personality on ‘The Shooting Show,’ the 460 Rowland was intended to make the absolute most of the 45-Auto concept while staying within the basic 1911 size. (You can get a revolver rechambered to .460, too.) To do this, Rowland went to a special strong cartridge case enough longer than a 45 ACP case that it will not chamber in a standard 45 Auto. The 460 Rowland ammunition pushes the 45-caliber 1911 envelope close to its limits. As any 45-auto shooter can tell you, recoil with some plus-P 45 loads is getting right up there. To boost the velocity of a 230-grain bullet to more than 1000 fps is pushing things. But to boost that same bullet to nearly 1400 fps. Zowie! Clearly, a muzzle brake looked like a good idea.

The 460 Rowland kit included more than just the stainless-steel barrel, hence the extra money. There was also a bushing, link, heavier slide and firing-pin springs, a two-piece guide rod for the 24-pound spring, and hanging out front, a big muzzle brake (your choice of blued or stainless). All the parts were well made and, as we found, well thought out. We told Clark we would put this unit into a Norinco. The Clark website (ClarkCustomGuns.com) noted that Norincos like our test gun may require some minor fitting, but ours didn’t. Some guns are unsuitable for this conversion, and Clark makes that very plain. If you have any questions or doubts about your 1911, ask them.) The whole apparatus went easily into our gun, with exactly no fitting required. That’s how we define drop-in. Clark Custom Guns clearly speaks the same language we do, and their workmanship here was outstanding. Clark recommends sending in your slide if you doubt your ability to make the kit fit. One nice touch was that the last few threads of the two-piece spring buffer required the use of an Allen wrench (included), with the idea of keeping all the parts of the gun together under severe and continued recoil. We thought this was a good idea. The 460 Rowland offered lots of power and high velocity with heavy 45-caliber bullets, but with much higher pressure. And that heavy spring won’t get cycled by normal 45 ACP loads, which can be safely fired in the 460 chamber. The 460 Rowland was thoroughly workable, delivering much more power than the 45 ACP or the 400 Cor-Bon. For those who want a simple conversion that offers far more power from a slightly larger package than the normal 1911, the Rowland might just be for you. Clark did a marvelous job, we thought, on this package. But does it make sense to try to turn a 1911 into a 44 Magnum? We don’t think so. Conditional Buy.”

Our test crew declared we would not own one, but that doesn’t mean the Rowland’s not perfect for you. Be aware that continued use can’t do your 1911 any good in the long haul. Performance costs are not always right up front, nor always obvious.” — Todd Woodard

On handguns and holsters: I decided decades ago that safety, speed, and comfort were the most important elements of concealed-handgun carry. For AIWB carry, I prefer DA revolvers, DA/SA pistols, or semi-autos that can be switched off with a safety (such as with M1911s, which also have grip safeties). I know many people are happy with trigger-safety guns in AIWB, but I am not. I like Glocks and such, but I don’t want them pointing down the front of my leg. With so many new CCW shooters, I advise caution in gun handling. 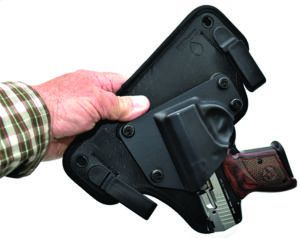 AIWB gun selection also is governed by the rise length of the carrier. Short-waisted people will be comfortable with shorter-barrelled guns. Long-waisted people may accommodate longer guns. This has little to do with height. It is a feature of build, and if observed, can save the shooter from buying a drawer full of ill-fitting holsters. A final word about 3 o’clock or 4 o’clock waist carry. This position often is criticized for printing too much. I’ve found that holsters that loft the gun above the belt, placing the grip in that indention in the human body above the hip and next to the rib cage, hides handguns very well. I carry both an M1911 and an S&W 3-inch L frame in such holsters with comfort and concealment. — Larry

Regarding the “Firing Line” letter, “Women of a Certain Age Carry.” Why in all the articles and reviews on guns for the aging and people with weaker hand strength do we not discuss the Taurus PT-22 and Beretta’s Bobcat, Tomcat, and Cheetah? For people with weaker hands, these are slimmer than a revolver, and their tip-up barrels eliminate the need to rack the slide. — Brad

Hey Brad: You’re right, these are good choices for shooters with compromised hand strength, but they most often appear in 22 LR, 32 ACP, and 380 ACP chamberings, which may not appeal to a lot of people. In the January 1999 issue, we wrote of the Beretta Tomcat 32 ACP, “Tipping up the Beretta’s barrel to load or unload the chamber was a simple matter of pushing forward on the barrel release, a lever at the front top of the left grip panel.” However, we added, “Despite its comparatively low price, the Beretta Tomcat 32 ACP handgun was more than accurate enough for a pocket pistol. We thought it felt and handled better than the other guns in this test, and it had the most convenient controls. However, we won’t recommend a defensive firearm that isn’t reliable, and this one wasn’t. We would pass on this pistol.” In the August 2006 issue, we tested the Beretta Model 21A Bobcat 22 LR and the Taurus PT-22 head to head, with the latter getting an Our Pick rating. Of the Taurus we wrote, “The pop-up barrel system worked well on the Taurus. Closing it was far easier than with the other gun. And the Taurus had sights! They were big enough to see, and they gave an excellent picture.”

Dear Todd: Just a random thought brought on by your latest evaluation of the 22-caliber high-capacity pistols, the Ruger-57, 1911 TCM Rock Island, and the KelTec PMR-30. One for certain, all were reported to be fire-breathers, which means a loud report. My question, why are they not also available with threaded barrels? Or, why can’t threaded barrels be available as an option from the factory? You buy the gun, and if you’re lucky, or fortunate enough to have a silencer, you could buy a threaded barrel to swap out or just for a spare barrel.

More broadly, I would appreciate articles pertaining to silencers, their background, possible sound testing, attachment systems, ease, weight, expense, the best way to own them, how they should be licensed and such. Most of us don’t know a whole hell of a lot about silencers. I would just like a little education on the subject.

Thanks for everything, and a great magazine. All your articles are good, even though they may not pertain to my particular interests. But I always learn something, and I enjoy the pointers slipped into the articles by the staff. — Mike S

Hey Mike: The short answer on the threaded barrels is that the potential market for silencers is very small, at least while the devices are controlled under National Firearms Act rules. So the makers aren’t going to roll out new guns with more-expensive threaded barrels right off the bat. Also, the rounds weren’t ideal candidates for suppression because they had muzzle velocities from 1351 fps to 1977 fps. In these pages, we’ve done a couple of articles on firearms with threaded barrels and shot them with suppressors, but the Gun Tests readership didn’t really respond to those articles with much interest, so I’ve taken the silencers out of the coverage rotation. However, personally, I’m not buying any new firearms (except shotguns) that don’t have threads on them. — tw

Hello, Todd. I hope this finds you healthy and as happy as we can be under the circumstances! I have no basis in facts for this, just opinion. If the gun-grabbing extremists had planned this themselves, it could not be more effective. The shortages of all centerfire handgun ammo, and the hideous prices being asked for basic run-of-the-mill target/practice ammo, are essentially ending many peoples’ enjoyment of any shooting sports or days at the range. 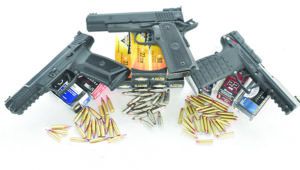 A spot-check a few minutes ago on AmmoSeek.com shows basic 9mm Luger at 60 cents per round and up to $1 a round for standard 115-grain FMJ ammo — if you can find it. Also, 45 ACP and 40 S&W are about the same. The 1000-round cases we were buying eight months ago for $169 are now more than $600. Makes a guy think twice about shooting a match with a nominal 150-round expenditure. Shooting speed steel is fine; we’ve gone back to our rimfire pistols and rifles, but USPSA, IDPA, ICORE, etc. are getting painful, and there’s no end in sight. My opinion is this cannot all be due to COVID.

The ammunition manufacturers increased their cartridge production so significantly several years ago when we went through this same crap that they assured us it would not happen again. Well, it has, and no one is talking about it (again), no one is offering up any hope for a change, and the ammo makers have to be making huge profits from all this, at our expense and helping the gun-grabbers no end. I see that sales of new guns are through the roof, but where is the ammo coming from that has to be going out the door with the purchase? Several boxes of ammo right now cost more than the firearm, how absurd is that? Thanks for letting me vent.  — Marc