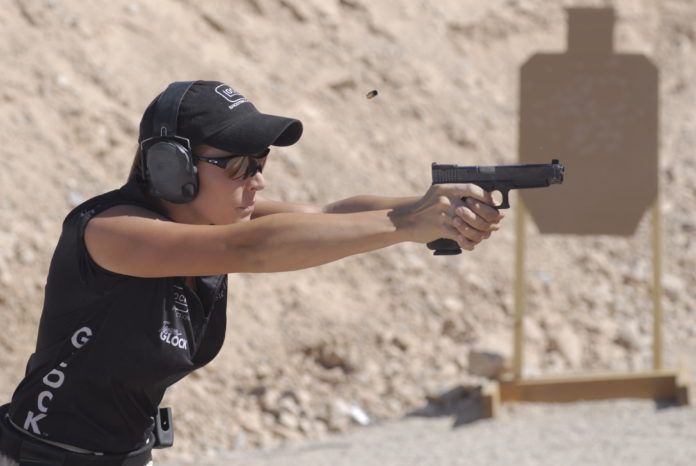 This year Abbate claimed both the Production and Limited division women’s titles. In 2008 she was crowned the Limited and Limited-10 champion.

Golob, who resides in Glasgow, Mont., secured second place with a final score of 986.7540. In third was another Team Glock member, Randi Rogers of Durango, Colo. who shot 973.9135. Rounding out the top five were Dianna Liedorff of Sperry, Okla. in fourth with 851.0833 and Carrie Jamrogowicz of Missoula, Mont. in fifth with a final score of 799.0553.

In the Limited division where Abbate holds the rank of Master, the second highest skill level in the sport of Practical Shooting, she again put on an impressive display shooting a score of 1050.2892 and finishing over 114 points ahead of Lisa Munson of Marysville, Wash. who came in second with 935.3943. Munson shoots for Team SVI and also holds the rank of Master.

Tasha Hanish of Cave Creek, Ariz. took third finishing just behind Munson with a score of 933.3767. Carina Randolph of Richardson, Texas finished fourth shooting 923.4845 and in fifth place was Lily Chung of San Jose, Calif. with 768.0001.

The Nationals which were held at the Desert Sportsman’s Rifle & Pistol Club outside Las Vegas September 11-19 drew more than 620 top shooters from across the country and around the world. For more information visit www.USPSA-Nationals.org.

An Important Note for GunReports.Com Readers:

Our goal on this website is to foster a free expression of views while reining in language that crosses the line of civil discourse. Accordingly, the comments areas are intended to expand the knowledge of all users of this site. But site administrators wish to discourage the use of profanity, insults, disrespect, the advocacy of lawlessness, violence or sedition, or attempts to impinge on the rights of others.

While GunReports.Com encourages robust discourse that furthers our understanding of all the issues affecting gun owners, comments that break GunReports.Com’s rules will be removed. In addition, we reserve the right to edit or delete individual comments, and in extreme cases, to ban commenters at our discretion.