Ordorica said, “Weatherby makes quite a few versions of rifles in this caliber, and we chose to test the $2400 Mark V Deluxe against the Vanguard Series 2 Deluxe, which sells for $1149, to see what you might get for the extra money needed to buy the Mark V.”

He added, “No matter how you cut it, there’s no denying the aura of the Weatherby name, and we must admit we enjoyed using two fabulous 30mm Leupold scopes on these very precise and good-looking Weatherby rifles. Maybe that’s enough reason to buy one.”

Gun Tests Editor Todd Woodard said, “We should note that we had the devil of a time finding ammo, and finally bought some from a local user of the cartridge in 87-grain Spire Point and 120-grain Nosler Partition. It ran about $65 a box on average.”

“This was an unusual test for us, comparing two Weatherby rifles,” Ordorica said. “But the price difference was substantial enough for us to consider whether we’d buy the Vanguard before the Mark V and come out a thousand dollars or more ahead.”

Eckstine said, “The Howa Youth 2N1 rifles come with two different stocks so that the same Howa M1500 action will accommodate more than one shooter. Both OverMolded stocks are manufactured by Hogue. The Thompson Center Arms Dimension rifle accepts different-caliber barrels so that the same rifle can be used to hunt a wider variety of game.”

“The .243 Winchester is a sweetheart of a cartridge,” GT Editor Woodard said. “Though these might be marketed to youth, women, or smaller-frame hunters, I think any deer hunter would appreciate the soft-shooting characteristics of these rifles out to 300 yards.”

Gun Tests subscribers should receive their printed magazines in about 10 days. Subscribers with electronic access can check Gun-Tests.com to read these matchups in a couple of days, GT Publisher Tim Cole said. 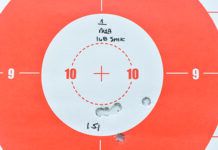 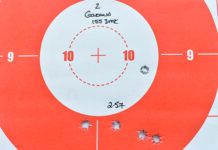