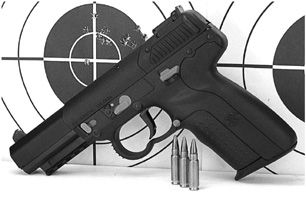 There are numerous guns we test in the process of our regular head-to-head comparisons, but these products sometimes don’t fit with other products, or are tested after the main review. Also, we test many accessories that don’t wind up in regular feature matchups, but which purport to offer value or function gunowners might like. Our periodic Range Bag feature is the place we collect and publish these follow-ups, one-offs, or other evaluations.

[PDFCAP(1)]
Designed as a companion to the FN P90 Submachine gun, the FN Five Seven pistol is a lightweight polymer pistol chambered for 5.7x28mm ammunition. The 5.7x28mm round features a necked-down case similar to but smaller than the .223 Remington round, which was chambered for two pistols we tested in the September 2004 issue. Those guns were the Olympic Arms OA 98 and Bushmaster Carbon 15 Model 97.

Initially, sales of the Five Seven pistol were intended to be limited to military and law enforcement personnel because the 5.7x28mm ammunition is available with armor-piercing bullets. However, the FN Five Seven pistol is now available to civilians.

We loaded our 10-round magazines with the FN-supplied 31-grain open-tipped FMJ rounds and headed to the range. We found the FN Five Seven to be a very lightweight pistol, weighing only 21 ounces unloaded. To house the overall length of the rounds, the grip was longer front to back than those found on most pistols, making it a little harder to connect the hands when using a two-hand grip. Right-handed shooters had to work a little harder to get their thumbs around to press the magazine release. In fact, the safety release and the slide release levers were in opposite positions from what we are used to. The slide release was to the rear, and the ambidextrous thumb safety was located above the trigger so that the shooter had to use the weak-hand thumb to operate the safety. All levers were polymer, just like the frame and top-end shroud.

Atop the Five Seven pistol was a tall front sight with a white dot and a fully adjustable rear sight with two dots. Beneath the dust cover was a Picatinny rail with plenty of room for accessories. Two magazines were supplied, and we loaded these magazines in much the same manner as AR-15 magazines. The rounds needed to be pushed straight down atop the follower rather than slid down and in from the front lip, as per typical pistol design. FN also provided a cleaning kit in a sealed container, a cable lock, and sight adjustment key.

The Five Seven is a recoil-operated pistol working via a delayed blowback system. Some FN technicians we spoke with were uncomfortable about using the term “delayed” because they didn’t want this system to be confused with other somewhat similar designs such as the one found in HK products. The Five Seven pistol worked like a charm.

To remove the top end, we pushed the slide back about a half inch and pulled the left side-mounted breakdown lever toward the rear of the pistol. Because there were no slide and frame rails, the top end lifted straight up and off. Lifting out the barrel, we found it was surrounded by the recoil spring, which itself was retained by a collar and a ring set into the muzzle end of the barrel. The barrel was fit to the receiver via a slot underneath the chamber, but during operation rear barrel alignment is achieved as it is pushed against the breech face. In this design, the barrel does not drop away; instead, the steel slide, which was encased in a polymer shroud, moved back and forth. The steel components that are housed inside the polymer top end were coated with phosphate for durability and to resist corrosion.

The ammunition we were supplied with featured a hollow tip but was not designed to expand. This was the ball ammunition intended for training, and it differed significantly in design from the military and law enforcement-only rounds, each of which were manufactured by Winchester Olin.

Accuracy from the Five Seven pistol was very good. Five-shot groups measured as little as 1.2 inches across measured center to center. The FN website refers to the Five Seven pistol as producing recoil about 40 percent less than that of a typical 9mm round. We found that if we held on to the pistol, the sights returned quickly to alignment. Cycling speed appeared to be very quick, and the reciprocation didn’t disrupt the sight picture. The trigger was crisp and predictable. We wish all hinged-trigger polymer pistols were as consistent and accurate as the FN Five Seven pistol.

Gun Tests Recommends
• FN Five Seven Pistol 5.7x28mm, $1020. Buy It. We’re not entirely settled on the fight-stopping capability of the civilian issue 5.7x28mm ball ammunition, but we feel FN did an excellent job of bringing together design features such as a fine trigger, manual safety, a first-class accessory rail, ease of maintenance, and foolproof accuracy in an ultra-lightweight package.

Don Bower’s (Almost) Ultra-Precise Ruger No. 1
We have been testing an alternate to the bolt-action precision rifle, in the form of a lovely Ruger No. 1 with custom gain-twist barrel, one assembled by the master of long-range pistolcraft, Don Bower of Aurora, Colorado. Bower builds single-shot handguns that are capable of groups as small as 3 inches at 500 yards.

Bower achieves this phenomenal accuracy partly by utilizing a rimmed case and by seating the bullet into the rifling, two techniques that he says help guarantee consistent results from shot to shot. Bower applied this technique to his gain-twist Ruger No. 1, the rifle chambered for a 6.5mm wildcat that Bower calls the 6.5 SS Bower. It utilizes a .444 Marlin case slightly altered, and necked down to hold .264-inch bullets. This configuration shoots a 120-grain bullet well over 3000 fps.

A Colorado shooter fired three shots from this Bower rifle into a group of about 3 inches at 1000 yards (yes, one thousand yards), but was unable to repeat the performance because of weather and time constraints. Bower then sent us the rifle and many, many components for further testing in Idaho. We wanted to shoot the rifle at a rifle range that was to permit shooting out to 800 yards, but the promised range did not materialize, so we had to confine our testing to 100 yards.

We prepared ten cases as perfectly as we could, though Bower asserts this is not really necessary. The ten cases weighed the same, within a grain of each other. We trimmed them all to length, uniformed the primer pockets inside and out, and made sure the case necks were also uniform.

We first loaded a reasonable load utilizing 140-grain Sierra MatchKing bullets. We found these tipped at 100 yards, and increasing the load didn’t help much. We concluded the twist rate was not fast enough for them, and abandoned all testing with that weight bullet. However, even with these bullets we saw a problem on the target that indicated trouble.

Dropping to 120-grain Nosler Ballistic Tip bullets, we got them to hit head-on at the target. Now the rifle problem made itself known more distinctly. Several bullets would strike nearly touching, proving (at least to us) the validity of Bower’s claims of phenomenal accuracy within the potential of the No.1. However, several fliers within each group indicated a problem. The flyers made this into a 1.2-inch rifle at best, some groups measuring as large as 1.5 inches. We suspected bedding.

We removed the adjustable buttplate and tightened the buttstock screw half a turn. The forend screw was slightly loose, so we snugged that one up too. Bower had some sort of soft bedding under the forend, and we also suspected that, but declined to change it. At the range, groups improved a bit. Some of the three-shot groups now cut one ragged hole, or 0.5 to 0.75 inch. However, the fliers were still there, and we still suspected a bedding problem. The scope mounts seemed tight. We ran out of time and sent back the rifle, but we now know without a doubt that the Ruger No. 1 is capable of superior accuracy when set up with Bower’s system.

Gun Tests Recommends
• Don Bower Gunsmithing. Buy It. Some shooters have doubted the capabilities of the Ruger No. 1, but Bower’s work has shown us the truth. The seeker of incredible accuracy does not have to confine his choices to bolt-action rifles.

Don Bower is now quite ill, and no longer is personally involved in making his wonderfully accurate firearms. However, Bower sold all his equipment to Marc Sheehan in Nebraska, who will carry on Bower’s innovative tradition with all of Bower’s cartridges, using the same reamers and same construction techniques. Don Fisher will continue to make the forends. Contact Bower Shooting Products, Marc Sheehan, (402)-331-6628, or write 910 Cody Circle, Papillion, NE 68046.