According to our research, the first lever-action rifles on the market were quite probably Colt’s 1st and 2nd Ring Models, both cap-and-ball rifles, produced by the Patent Arms Manufacturing Company of Paterson, NJ, between 1837 and 1841. The ring lever was located in front of the trigger and, when pulled, would rotate the cylinder to the next position, cocking the internal hidden hammer. In the opinion of many, the first effective lever-action repeating rifle was developed by Benjamin Tyler Henry and dates back to 1860. Mr. Henry was a gunsmith employed by Winchester, and the firearms universe owes a great deal to both of them. These lever-action firearms were improved upon many times, with major new models being introduced in 1866, 1873, 1886, and 1892, to name a few. Perhaps the pinnacle of development for this action was reached in the Models of 1894 and 1895. The ‘86s, ‘92s and ’94s were all designs by John Moses Browning. Winchester ceased production on its 1894 rifles in 2006. The Marlin 1895 model is still going strong. Our two lever-action repeating rifles in this test are both descendants of that Marlin. Our Henry Side-Gate Lever Action X model is about as modern as you can get for this type of firearm. Announced in January 2020 and first displayed at the 2020 SHOT Show, we liked the updates we saw.

We should also clarify that the missing handload data for two Henry and Marlin Range Data listings isn’t a result of the action strength, but rather their limitation of accepting certain cartridge lengths. We verified that the longer C.O.A.L. (cartridge overall length) of two of the three handloads (Hornady 325-grain Flex Tip and Barnes 350-grain TSX FB) probably would not cycle through the two 1895 actions, but we tried. We could get them to chamber and fire in some cases, but only sporadically. For instance, the Hornady factory-loaded 325-grain Flex Tip bullets seated to the cannelure measured 2.59 inches in OAL. A handloaded round with a 350-grain Barnes TSX bullet seated to the cannelure measures 2.803 inches OAL. So we did not shoot or collect data for those two handloads in the Henry or the Marlin, and we didn’t ding the rifles for not accepting them. However, it’s worth noting those two handloads would chamber, fire, and extract in the High Wall without incident, so complete results are listed for the single-shot lever gun. 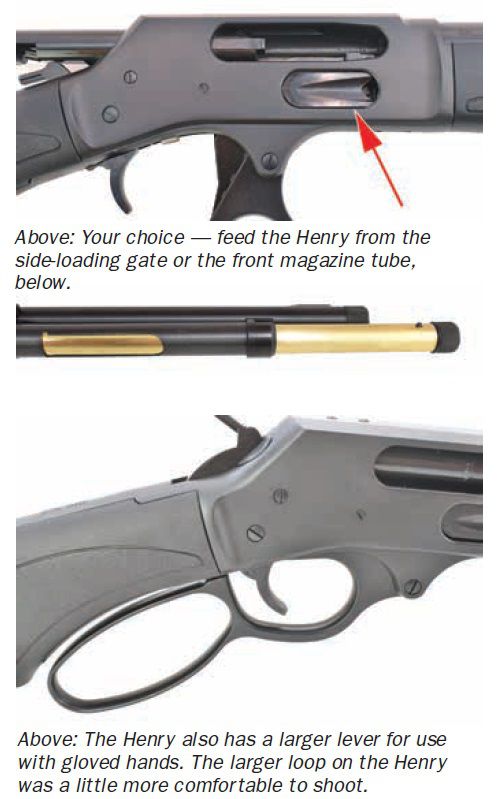 This rifle is matte black. Other than a little color in the sights, the magazine follower and the ammo tube, it is just plain black. The barrel is black, the receiver is black, all the parts are black. Both pieces of the synthetic stock are black. That is a very “current” look for a 120 plus year old design while still maintaining the lines we expect to see in an 1895 Model. This rifle is properly thin at the receiver, easy to carry with one hand and balances perfectly with the hand positioned so that the little finger is immediately in front of the trigger guard.

The barrel is 19.8 inches long, threaded for a suppressor and comes supplied with a screw on protector for those threads. The front sight is a style that we would expect for this firearm, but instead of just a blade sight, it has a well-protected green fiber-optic tube on top. The fiber-optic theme continues with the rear sight, and we really liked the design. The Lever X HIVIZ LITEWAVE rear sight is a substantial improvement over the traditional buckhorn rear, in our opinion. The standard rear blade now has a deeper “U” cut in the center that aids in acquisition of the front sight. The rear sight also has two red fiber-optic tubes that help frame and differentiate from the front sight. The rear sight is fitted in a dovetail as normal, making the sight drift adjustable for windage. There is a set screw drilled through to the dovetail allowing the rear sight to be locked in place after sighting. Instead of the traditional stepped elevator upon which the rear sight rests and which can be used to raise said sight, this rear sight had another set screw though the rear portion of the sight, which can be turned for elevation adjustments as needed.

The four-round magazine tube is well supported at the front via a bracket that is dovetailed into the bottom of the barrel. As one would expect from a modern Henry long gun, this rifle is loaded from the front of the magazine tube by rotating and raising the cap of the magazine tube so that the loading port is open. Next, cartridges are dropped down into the magazine, then the cap is lowered and rotated to a closed position. This procedure allows the Henry to be loaded quickly and easily. Perhaps more important, it allows this lever-action to be unloaded without having to cycle all the rounds through the chamber. It also requires that the rifle be near vertical for the system to work. With the release of this Lever X rifle, Henry added a side-loading gate so the shooter has a choice of whether he wants to load from the side or near the muzzle — the best of both worlds. The loop on the lever has been slightly enlarged, making it more comfortable to operate. The only safety in operation on this rifle is a transfer bar — if you don’t have the trigger all the way to the rear, the hammer does not make contact with the firing pin.

One of the major improvements of the 1895 Marlin vs. the 1894 Winchester was in the design of the receiver. The Marlin has a closed top and the Winchester did not. The added strength of the Marlin action has always been important, but now that closed receiver also means that it is much easier to mount some type of scope. Even if the desired optic is just a red dot, the greater precision in aiming substantially increases the range and the utility of the rifle-cartridge combination. Compared to a 300 Winchester Magnum, the most commonly used traditional (aka slow) ammunition for the 45-70 does shoot a trajectory very akin to a rainbow. This was very important before we had ways to precisely determine target range. The advent of sophisticated range-finders in compact, affordable units like the SIG Kilo 2000 we used does not make impossible shots probable, but they do make difficult shots more possible. As is so often the case, it comes down to knowing your rifle and practicing.

One of the inconveniences we sometimes have to live with on lever-actions is the lack of a good way to attach a sling swivel. The Henry stock takes care of that for you, and several other things as well. The black synthetic stock has sling attachments molded in, there is a four-slot Picatinny rail at the front of the forend, along with two M-Lok slots, one located on each side. Very handy. 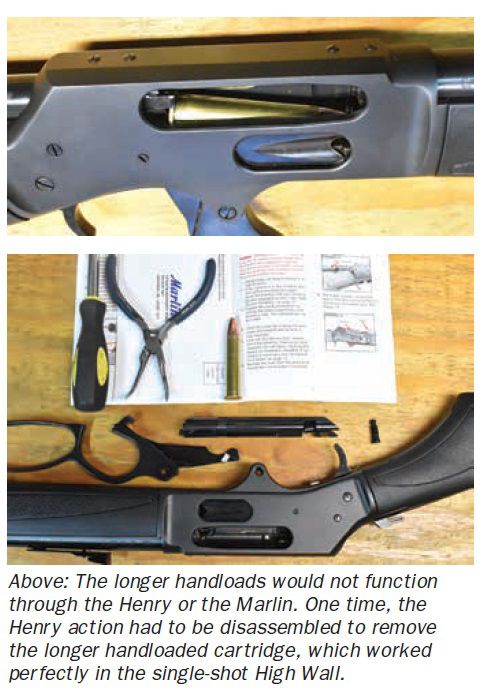 The stock has some pebble-grained texturing on the forend and the grip, which we thought was too smooth to do much good. Especially when we were trying to run the rifle while keeping it mounted on our shoulder, we felt the rifle was a bit slippery. The stock ends with a 1-inch rubber recoil pad we think could have been softer. Great sights do not make a firearm more accurate, but they make them easier to shoot accurately, and the fiber-optic upgrade to the sights made shooting the Henry, using iron sights only, more accurate with our eyes. The new sights were also easier and faster to acquire. Accuracy for the three-shot groups averaged about 2.5 inches, including the 3.5-inch open-sight group.

Our Team Said: At round 13 in our tests, a case stuck in the magazine tube. The opening in the front of that tube was invaluable here. We were able to remove the mag tube and gently tap the loaded round out into the receiver. We found a small burr on the rim of that case. It didn’t happen again, so we didn’t worry about it. We wouldn’t have been able to do that with a conventional gate-load only. The loading gate on the side of the receiver was also easier to use than the Marlin’s.

All groups were shot at 100 yards from a solid bench using a Caldwell TackDriver front rest ($44 at MidwayUSA.com) and a T.A.B. Gear large rear bag ($30 at TABGear.com) with the heavy fill. Muzzle velocity was determined using a LabRadar chronograph ($559 at BuyMyLabradar.com). Location: American Shooter Centers (AMShootCenters.com) in Houston. NA = Not Available. The longer handloads wouldn’t chamber in those guns.