For some time Aguila has offered a mini-shotshell in 12 gauge that has found use for personal defense in smaller shotshell-firing firearms such as Remington’s V3 Tac-13 autoloader and Tac-14 pumpguns based on the 870 platform, and Mossberg’s Shockwaves based on the 500 pumpgun mechanism. The mini-shells use reduced powder and shot charge, and as a result, recoil is decreased and capacity increased in repeaters. Federal Cartridge Company recently introduced its own line of mini shells. Nobel Sports offers a short shell that they claim is just enough longer to ensure good feed reliability, which made us curious to try all three out.

After testing these short shells, we find two of the three types unsuited for personal defense based on reliability. It is true that the loads are more powerful than handgun loads, but we are concerned about penetration with the lighter shot in two of the shells. More problematic, feed reliability is a problem. A special device that clips into the loading port and offers perfected feed is available for the Mossberg pump action, but not the other pumps, and there are plenty of Remington, Ithaca, Winchester, and foreign pump-action shotguns. The single-barrel or double-barrel break-action style would seem to be the natural home for these shells.

We began the test with a proven shotgun, a Remington 870 with XS front sight and Advantage Tactical stock. This fast-handling and compact 12 gauge retains the original four-shot magazine. After initial testing we also attempted to use the shells in a Winchester SXP and a Mossberg 590A, with the same results. For function firing, we also ran some shells through a Benelli Super 90.

As we verified during the shooting tests with these firearms, the pattern, payload, and energy of the shorties is considerably below that offered by full-power buckshot rounds. Recoil is also greater with full-power buckshot. But then Federal, Fiocchi, Hornady, Remington, and Winchester offer reduced recoil buckshot loads. In these rounds, recoil momentum is curtailed noticeably by a smaller power charge and by using eight balls instead of nine, and No. 4 buckshot is also available in a reduced-recoil loading. When the recoil of the standard-length reduced-recoil loads is compared to that of the short shells, the raters found little practical difference. The advantage of an extra shell or two was negated by a lack of feed reliability. The Nobel Sports load is a counterpoint. They work as designed and offer a real advantage. We would load the Nobel Sports shorty shells with confidence. 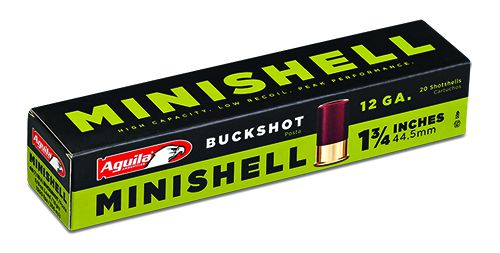 We bought packages of 20 Minishells for $18.99 each at VenturaMunitions.com. The Aguila loading consists of a payload of seven No. 4 buckshot and four No. 1 buck, an interesting mixed 5⁄8-ounce load. The logic behind the shells is twofold. First, the loading is intended for personal defense for those who have a difficult time controlling 12-gauge recoil. The second goal is to provide greater magazine capacity in shotguns that already have a limited payload. As an example, with standard 2.75-inch shells, the Remington 870 riot gun used for this test has a four-shell capacity. The mini shells increase capacity to seven, a significant upgrade. Also, senior citizens and younger shooters may handle the shotgun without bone-jarring recoil with this 1.75-inch-long 1200-fps load. This may allow a larger segment of the population to successfully use the shotgun for personal defense, providing the shell’s payload is adequate for the chore.

Most of the time, if we worked the action vigorously we could convince the first shell to feed and fire. But after that, we seldom made it through a magazine without either the shell failing to completely eject or failing to feed. The last shell in the magazine was especially prone to a nose-up failure to feed. Though the shotshell is rated at 1.75 inches in length, that’s the expanded length of the case after firing. Crimped length of the unfired shell was 1.36 inches, compared to the 2.75-inch shotshells’s 2.32-inch unfired length. The shell elevator did not properly feed the Aguila shells, and often they would hang up in a nose upward attitude that was difficult to clear. While shotgunners sometimes short-cycle a pump, this tie up is relatively easier to clear than a short shell cammed sideways in the action.

We tested the shells’ pattern at 10 yards and its velocity was clocked from 1050 to 1136 fps, though rated from 1200 fps from the manufacturer. Patterns were averaged with some at 6.5-by-9 inches and others 7.5-by-6.2 inches. While some may feel that this wider pattern is a good thing for home defense and hit probability, we prefer a tighter pattern.

Our Team Said: After firing 40 shells, we felt the Aguila Minishells are not suited for home defense. The first demerit is the failure to feed in pump-action shotguns. Self-loaders would not function with the low recoil impulse, as confirmed with three shells in a Benelli Super 90.

We bought this round for $8.13 for 10 shells at VenturaMunitions.com. The 12 gauge is a formidable shotgun, and shooters are constantly trying to achieve good performance with less recoil, as the lower-recoil law-enforcement shotgun shells attest. While #00 buckshot is proven as a personal-defense performer, even with lower-recoil loads, the consensus is that No. 4 is less proven. Federal Cartridge Company has introduced a line of mini-shells to compete with Aguila.

The Federals have an advantage in price at every outlet we checked. In common with the Aguila loading, they are designed with the premise that the lowered power level is adequate for personal defense.

During our shooting, the Federal shells failed to feed during the same test as the Aguila shorty shells. In common with the Aguila shells, the Federal short shells increased magazine capacity in the Remington riot gun from four shells to seven. However, one of the raters managed to fire a full tube in the Remington by aggressively racking the action and with concentration.

The technique is to use a smooth, deliberate action and work the action as sharply as possible. After attempting to teach the other raters the same action, malfunctions were reduced but never completely eliminated, even in the hands of adept shotgunners.

Moving to ballistic testing, the Federal shells were also fired at 10-yard distances. At 1145 fps (rated by the manufacturer at 1200 fps), the shells were low recoil compared to most buckshot loads. Velocity was very consistent, with a standard deviation of 20 fps. The load of No. 4 buckshot was 16 balls compared to a 24- to 27-ball payload in a standard 2.75-inch load.

The patterns were good and tight in the center of our point of aim, but stragglers spread the pattern at an average of 6.5-by-5 inches with some at 7.5-by-4.5 inches.

Our Team Said: The shells fed no better than the Aguila overall. The pattern, however, was better. 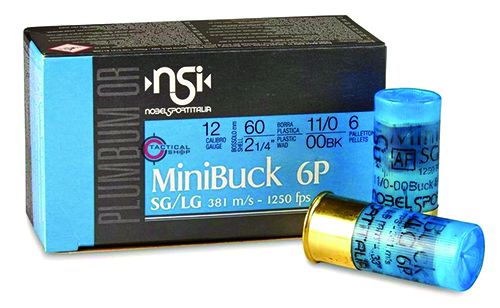 We bought the Nobel Sports short shell for $7.42 per 10 shells from J&GSales.com. The advantage of the Nobel Sports load is that the slightly longer shell is intended to cure the feed problems experienced with short shotgun shells. While this is fine as far as it goes, the advantage gained is only one shell in the Remington’s four-shot tube, and the payload increases to nine shells in a seven-shot magazine. The shell is advertised at 2.25 inches in length for the fired case, and unfired, it comes in at 2.19 inches, or 0.13 inches shorter than the unfired length of 2.32 inches for a 2.75-inch shell.

The Nobel payload travels at an average of 1320 fps, and it is very consistent and produced higher velocities than its rated speed of 1250 fps. Recoil was greater than the other mini shells, but lighter than the full-power Hornady Critical Defense buckshot load, which uses eight #00 buck pellets.

The pattern was noticeably better than the other mini shells at a 6.5-by-7.5-inch average. We feel that the #00 buck load at this velocity will offer good penetration; after all, many of the reduced-recoil #00 buckshot loads with eight #00 pellets are considerably slower.

Our Team Said: The bottom line, however, was reliability. The NSI load worked flawlessly. There are no hang-ups of any type. It is definitely the best of the minis.