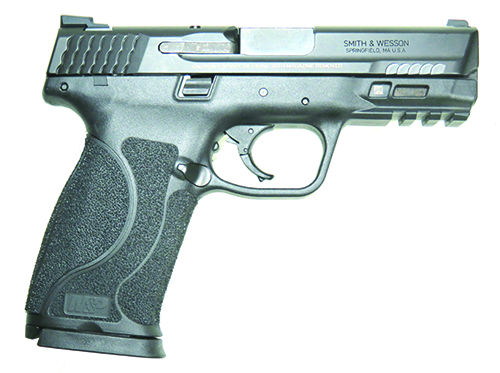 This was a recent price at PalmettoStateArmory.com. The M&P45 M2.0 came in a plain cardboard box, with two steel-body magazines and four different grip modules. This is the next evolution of the M&P line in which S&W kept what was right and tweaked the rest. This compact variant fills the gap between the subcompact and full-size M2.0 45 Auto pistols. The 18-degree grip angle, internal sear-release lever for takedown, and steel magazines have stayed the same. In fact, the M2.0 is backwards compatible with older M&P 45 Auto magazines. It also fits holsters made for previous generation M&P45 pistols. The polymer grip is matte black, while the stainless-steel barrel and slide feature a black Armornite finish.

The most obvious changes to the new M2.0 are the grip inserts with palmswells sized small, medium, medium/large, and large. The medium/large and large inserts have an extended beavertail. We used the medium grip insert for testing. Inserts are simple to swap out. First remove the frame tool from the bottom of the grip by rotating it one quarter turn in either direction and pulling it down and out of the frame. The insert just snaps out. The texture is quite grippy, like a sandpaper without the abrasion. We like this texture a lot. Also new are the forward cocking serrations, which are now a narrow horizontal strip on the front end of the slide. We found we could easily use these serrations and angled muzzle of the slide to do a press check. On the left side of the frame, the slide-release lever now features a spring-loaded detent. It is ambidextrous, too. The spring-loaded detent on the slide-stop lever is designed to prevent the slide from dropping prematurely when slamming home a full magazine in a lightweight polymer pistol. This means you need to sling-shot the slide or press the slide-release lever to chamber a round after the slide locks back. Use the slide-release lever, that makes for a smoother and faster transition after reloading. The magazine release is steel and reversible. Our variant was sans thumb safety, but there is also a model with an ambidextrous thumb safety.

Another obvious change is the steel chassis that holds the internal mechanism and slide rails. You can see the steel chassis via two windows on each side of the polymer frame near the muzzle. The chassis is designed to reduce the frame from flexing under recoil, especially when accessories are clamped to the Picatinny rail dustcover. This also makes the M2.0 weigh a little more than the old variant.

Less visible but very tactile are the changes made to the trigger. The wide, smooth trigger is lighter on the M2.0, with a trigger pull that measured a consistent and repeatable 5.5 pounds. The trigger is also more tactile with an audible click on reset. Reset is about 0.4 inches and more positive. We liked this factory trigger.

The pistol sports a steel white-dot front sight blade and dual white-dot rear sight. We like these sights, though we would probably add night sights with a contrasting front dot. The sights are dovetailed into the slide, and the rear can be adjusted for windage via loosening a hex screw and tapping the sight over.

When you pick up the M&P45 M2.0, you immediately experience the 18-degree grip angle that many of our testers likened to the grip angle of a 1911, Hi-Power, or SIG. In our opinion, it provides a natural aim and quick follow-up shots as we soon learned it.

Our best five-shot group at 25 yards, 1.36 inches, came from the Winchester 230-grain FMJs. The HPR 185-grain JHP was second smallest at 1.8 inches. On average, this pistol grouped five shots at 25 yards between 1.5 and 2.0 inches if we did our job. We thought that was super, but what really wowed us was how easily we adapted to the pistol and performed with it during the Wizard Drill. Fast double taps were easy to control thanks to the great ergonomics and trigger. The M2.0 ran with complete reliability through a few hundred rounds of ammo.

We did note the tenth and last round loaded hard in the magazine. We busted our thumbs and suggest using a magazine loader. The trade off with the compact M2.0 over the LWD was a 10+1 capacity.

We had an old M&P shell for an Alien Gear holster and used it the conceal carry the M2.0. It was comfortable to carry the M2.0 all day. The S&W was the lightest pistol, weighing 33.5 ounces loaded.

Our Team Said: We liked the grip angle and textured grip inserts with palm swells, as well as the wide trigger and large sights. Recoil was quite controllable. The magazine capacity was a good trade off for a more concealable pistol. This is an excellent option if you want a compact 45 Auto. The cost is very reasonable for a pistol so well equipped. 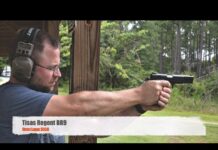 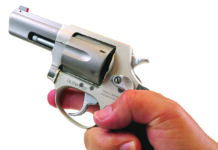 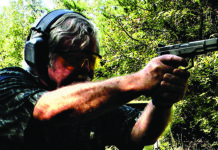