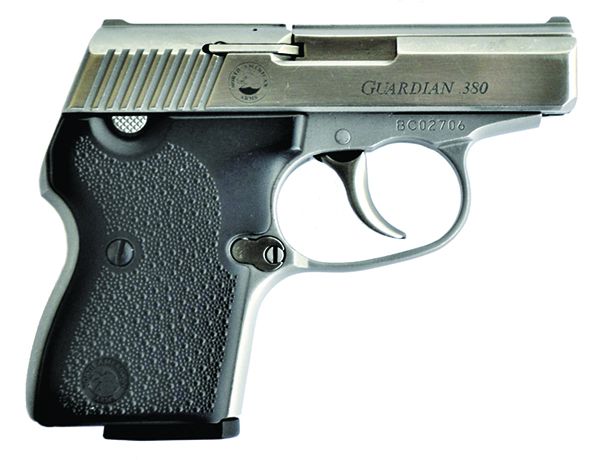 North American Arms offers a good-quality small revolver that has been well received. Less well known is the NAA Guardian. Offered in several calibers, including the 32 NAA, our example is chambered for 380 ACP. Considering performance and ammunition availability, this caliber makes the most sense. The Guardian is based on the LWS 32, a trendsetting 32 ACP pistol from Seecamp. Once highly sought after, the Seecamp has been eclipsed by more-modern offerings. The current version of our test pistol in 380 ACP lists for $456.

The Guardian is manufactured from stainless steel. The pistol is a double-action-only design. The barrel is fixed, and the pistol operates on a simple blowback principle. The slide is stainless steel, while the frame is cast steel. The small parts are the well known and sometimes disliked metal-injection-molding pieces, or MIM. We have not had such a part break during testing, but we also prefer forged when we can have it. We can’t have it very often these days without paying a thousand dollars or so.

The magazines are steel units and seem well made. The pistol features a nice brushed finish on the slide. The sights are very small, just nubs on the top of the slide. The pistol features a magazine release that is positive in operation and did not dump the magazine in our preferred pocket carry. The takedown lever is out of the way on the frame. The trigger action is smooth, but heavy, at 12 pounds even, according to the Lyman Electronic Registering Trigger Gauge. The pistol is hammer fired. The hammer rides flush with the rear of the slide and protrudes just a little when the pistol is fired. The action is smooth straight to the rear and requires some getting used to. In the event of a dud round, the pistol’s trigger may simply be pulled again to try to make the round fire.

We found the pistol used for $350. The shopkeep would not budge on price, even though BudsGunShop.com has the pistol for $386 plus shipping. We justified the price by dint of the pistol having four magazines, a pocket holster, and a magazine holder. Still, we thought the price to be about 15% high.

We inspected and dry-fired the pistol extensively. Disassembly is simple: Make sure the pistol is empty, then pull the slide to the rear and off the frame while pressing the takedown button. The pistol was well lubricated prior to firing. We used three types of ammunition in the initial evaluation. These were the PMC Bronze 90-grain FMJ loading, SIG Sauer’s 100-grain FMJ, and Fiocchi’s 90-grain JHP, all in 50-round boxes. The goal was to fire 100 rounds in each pistol, alternating among the raters. The Guardian is the heaviest pistol tested, so we were surprised that the pistol kicked pretty hard. The Guardian exhibited unpleasant recoil with the PMC loading. The SIG load kicked a little less, and the Fiocchi load was tolerable. This is despite dual recoil springs.

We grooved into the pistol, however, and proceeded to fire the requisite rounds in drills at man-sized targets at 5 and 7 yards. Double taps were widely spaced due to the problem of controlling recoil. Firing at longer range was a waste of time and ammunition, although one rater managed to get decent hits out to 10 yards. The tiny sights were a struggle, and we were very slow attempting to line them up. Ignore the sights and aim by indexing the slide on the paper, and you will be faster, but inaccurate. You cannot win with this set up, in our opinion. The pistol is designed to be used at very short range. By silhouetting the slide in the center of the target, we did get fairly decent results at 5 yards.

During firing, we noticed the pistol often jammed the spent case between the slide and barrel on the last shot. This is a design feature; the pistol has no slide lock and operates by design in this manner. Before reloading, you must clear the spent case, then load the magazine and rack the slide. This isn’t a tactical pistol and was not designed to be, but the other pistols are much more friendly to use, our shooters said.

Firing at man-sized targets, the pistol fared okay at 5 yards, where we logged several 3-inch groups. But at 10 yards, the actual test distance, its worst group was over 8 inches wide and the best was 6 inches wide, all of which required great concentration. The pistol performed poorly in the shooting stage, in our estimation.

Our Team Said: Reliability was not in question; the Guardian never failed to feed, chamber, fire, or eject. We did not like the lack of a slide lock. The lack of an ejector hobbled the shooter’s reload speed. The pistol was rated down a full grade on this defect and another half grade on poor sights, and finally a full grade on a poor showing on combat accuracy and practical accuracy. We would not buy the Guardian 380. It represents an outdated premise for personal defense — that a small gun need not be accurate. NAA offers several sight and grip upgrades, which are fine, but better sights are more expensive.