Re “Go-Bag Rimfire Rifles from Savage, Ruger, and KelTec,” September 2020

Hi, I’m a longtime subscriber and want to thank you for doing such great work over the years. Regarding the article on 22 takedown rifles in the September 2020 issue, I wish you had included the Henry AR-7 Survival Rifle in your comparison. Might we see a short addendum or other review of this intriguing rifle? Thanks. — Alan

Hey Alan: We’ve tested several versions of survival rifles over the years, including the Henry. In the March 2003 issue, we tested three. At the time, we wrote, “We don’t know how many rifles have been produced, or what the overall commercial success of the AR-7 has been, but there must be a lot of these rifles out there. They’re still being made today by no fewer than two companies. Backing up a few years, Charter Arms acquired the rights to make the rifle from Armalite in 1973. In 1990, Survival Arms, Inc., acquired the rights and brought out a version with some design improvements. Today [2003] the AR-7 rifle is made by the Henry Repeating Arms Co., which offers its U.S.-made version with three finish options ($165-$200). It has the ability to store two magazines within its butt stock, not just one as in earlier AR-7s. Another company, AR-7 Industries, also offers the rifle ($150), and this company’s version also now stores two mags within the butt.

We acquir­ed another interesting firearm, also touted to be a survival weapon. While some think a semi-auto .22 LR rifle is ideal for “survival” uses, others put their faith into multi-barrel firearms. One of the handiest, smallest, and lightest of these is the M6 Scout by Springfield Armory. This piece also has a military “survival” history. Springfield offers four versions. We acquired a stainless one in .22 LR/.410 ($219), and tried it against the two AR-7s in sub-freezing weather.”

But since you asked specifically about the Henry, we wrote in 2003, “We chose a black-finished rifle for our testing, and found the finish is actually Teflon. Other finishes are silver and (more costly) camouflage. The entire rifle weighed only 2.6 pounds empty, and arrived in a black cardboard box. Prying off the butt pad revealed three main component parts and two eight-round magazines. Assembling the rifle was easy and straightforward…”

Our recommendation was: “Henry U.S. Survival Rifle, $165, Buy It. The fact that this rifle was so incredibly light was a big factor for us. We’d put a decent trigger into it and stick it in our backpack and go wherever we could legally carry a rifle, and consider ourselves prepared to fill the pot with nearly anything we could find to eat. The autoloader .22 will probably be a better choice than the M6 Scout if you happen to find yourself up against hostile forces. The Henry’s light weight would demand a steady rest of some sort in order to make reliable hits on small targets. We’d like more accuracy, but we felt this rifle had enough for most of its expected uses.” Henry still catalogs the rifle in three finishes, and it sells at $250 retail in 2020. Probably time to revisit the topic. Thank you for the idea. — Todd Woodard

Mr. Woodard, please let me start by thanking you for providing a tool I use constantly to make better informed decisions. I trust Gun Tests like no other publication I receive. Your “No-BS” style is awesome, and trust, being an elusive thing these days, is well earned with your tests.

To the reason for this message. I just finished the above referenced article and I really enjoyed it, as well as learning a great deal. Gun Tests style of writing, the side-by-side comparisons under real-world conditions, I find most useful and informative.

I suspect that most folks who subscribe to this publication own more than one firearm, as I do. If similar cartridge comparisons have been done for other calibers, namely 38 Special and 40 S&W, please let me know the Month, Volume, and Issue No. so I can look them up. If by chance they have not been done in the last five years, please consider them for future articles because manufacturers have made significant improvements as of late.

I can only imagine the rigors of doing make/model determinations when setting this kind of testing up. I would like to suggest that any future comparisons include options from Winchester and/or Federal’s new HST family of cartridges. I’m a “Buy American” kind of guy and favor these manufacturers as well as the choices you made.

Please pass along to the staff, thank you, keep up the good work and know your work saves your readers money, time, and helps us make good choices. I look forward to your response and future issues so I can gain more useful information on the other calibers mentioned. — Gregory 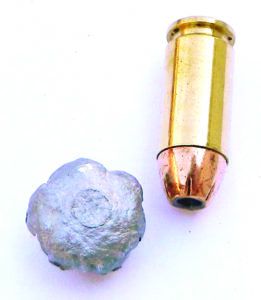 Hey Gregory, thanks for the kind words. Links to all of our ammunition comparisons are on the website. Click on the Ammunition page header to see the most-recent tests. You can also navigate to the archive that has all the links by going to Gun-Tests.com>Ammunition>Gun Tests Ammunition Comparisons. Or search for “Gun Tests Ammunition Comparisons” using the Search function. Though it’s outside your time window, the “40 S&W Ammunition Tests: Black Hills 155s Are Best Buy” in the February 2013 issue has a lot of still-current loads. One in particular is worth trying, I believe: the Black Hills D40N220 180-grain JHP, shown below. We wrote, “The Black Hills load demonstrated greater velocity than most 180-grain loads we have tested, with velocity consistently well over 1000 fps. Standard deviation was among the lowest of any we tested. We were impressed with the accuracy (2-inch average) and clean burn of this loading. Penetration was on the long end (20 inches in water) and the bullet plumped up and expanded (0.70 inch) with uncanny consistency. Control was not difficult. This would be our pick as an all-round service load for police work or field use. Cost: 84 cents/round. Gun Tests Grade: A.” Also, the Black Hills D40N120 155-grain JHP (shown below) proved accurate and consistent. 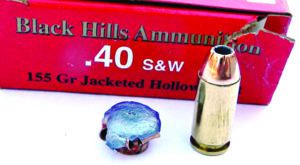 Felt recoil was less than its heavier stablemate, but neither was a chore to control. The 155-grain JHP predictably penetrated less than the 180-grain load (18 inches), and expansion (0.71 inch) was not on the par with the 180-grain load, although still quite good. If you have a need for an urban load or believe 180-grain penetration is too much, the 155-grain Black Hills load is a good choice. Based purely on economy versus performance, this is a best buy. Cost: 84 cents/round. Gun Tests Grade: A (Best Buy).” 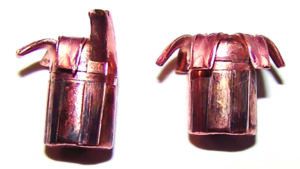 Dear Mr. Woodard, about “Making Changes Slowly” in your Downrange column. I like the photos next to each other of the guns tested. That is much better, much easier to compare. The larger photos are also much better.

But less treatment on B grades and lower? I have serious misgivings about that. I want to know all the problems and what it might take to solve and fix (or at least diagnose) them on guns that we already have, or that friends or relatives have, or that we see in the future. I absolutely want to know why a gun gets an F, a D, etc. By knowing the problem clearly, I can decide if I can fix it, get it fixed, or not.

If Gun Tests was just reviews about buying or not buying new or occasionally used guns, I would not keep subscribing. That information is useful and needed. But reading Gun Tests is education, not simply a list of buy and don’t buy.

The 22 LR rifle bullet review and comparison to pistols in October is great and a good example of B grades and why you gave them. To some, expansion means nothing because cans and paper don’t care if a bullet expands. Others ridding property of gophers, mice, and squirrels need that detail. The scope mount article was great and another example of needed detail on the two B grades. We need to know exactly why those mounts did not measure up.

I have been reading Gun Tests for at least 10 years. You get better each year. Removing knowledge on failures would not be a step up. Shortening is okay. Removing is not. Thanks. — Don

Hey Don, I appreciate the guidance. I’m like you — I consider the B’s very strongly. In fact, I’ve bought two B guns from our inventory in the past, a Weatherby Vanguard 308 and a Daniel Defense AR-15, and have gone about improving them both to fit my needs. On the reviews, I think I can cut the fat and not the lean, but I get where you’re coming from and will move slowly. — tw

Re “Used Scatterguns for Home Defense: We Test a Pump Trio,” October 2020

First of all, let me say I love your magazine, and I have been a long-time subscriber. But this is my first time writing to you. 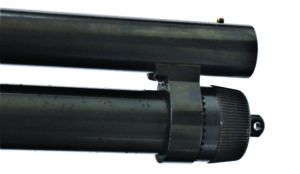 If you can only get a single additional shell in your four-shot 870, then you have some type of defect with that used shotgun. Maybe there is a ding or dent in the tube, preventing adding two shells, or some type of obstruction in the extension, or maybe even a shell limiter. But that is clearly a two-shot extension. Wilson and Scattergun do make one-shot extensions, and they are much much shorter in length.

On page 16, you have a picture of the shotgun shells used in your test, and they are all 23⁄4-inch shells, not 3-inch shells, which probably would reduce the shell count by one. — Douglas

First, Douglas, thanks for reading Gun Tests and for writing, and for your service to our country. We were unable to positively identify the magazine extension because there were no markings, but your experience indicates the extension is a Remington. We used 23⁄4-inch shells of several types. The raters each tried to stuff a full load in the extension, but the stated capacity is all we could reach. If the magazine extension is a Remington type and is damaged, that shows another of the pitfalls of dealing with used shotguns. The extension did not seem damaged. Otherwise, the shotgun worked well. So, we’ll agree that if readers can find an 870 that takes the extra shell, then we’d rate it up to a full A mark. Thanks for pointing this out. Best, Bob Campbell