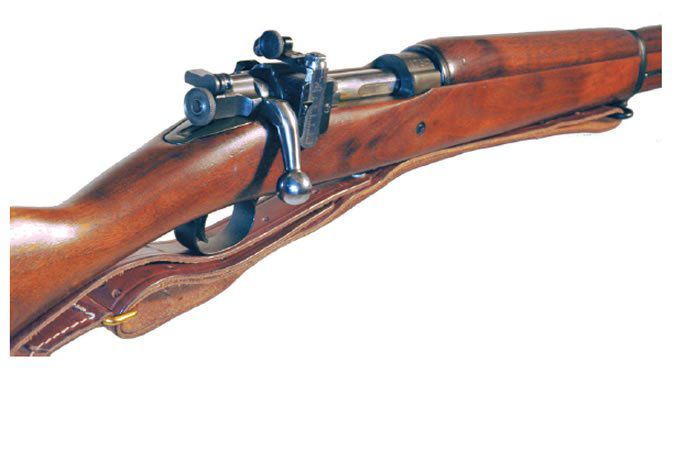 The great Springfield Model of 1903 saw service in the first World War, and was upgraded along the way to many types and model variations. Around 1918 or ‘19 it was first made in 22 caliber, when Springfield brought out the predecessor to the Model 1922. That first effort apparently was not a great job. Then along came Julian Hatcher and some other designers, who modified the early efforts into what became known as the Model 1922 Springfield. This was a five-shot, magazine-fed 22 LR with a stock that did not have an upper hand guard. In 1937 the rifle was again redone and renamed the Springfield M2, 22LR. These were manufactured until 1942. If you’re interested in adding a collectible to your armory that has plenty of history, but which can still shoot, here’s what you need to know before you begin searching for one:

Our test rifle has a barrel date stamp of 7-42, indicating it was made during that year. While every one of these we’ve examined online has had the shortened “sporterized” stock with no upper hand guard, our test sample has a full-length stock with upper hand guard, and resembled the original 30-06 version closely, but for the aperture sight on the back. Our test rifle has the rare sheet-metal front hood. The receiver sight is a Lyman, and the rifle has a trapped butt plate with a hole aligned perfectly with the trap door. In all other respects it seems to have the same markings on the stock and metal common to the M2 Springfield 22-caliber rifles with the abbreviated or “sporterized” stock.

We found the rifle to be in excellent condition throughout, though needing some attention. The full-length stock was sticky with dirt. We could not handle the rifle happily in that condition, so we fixed that with a very dilute rub of linseed oil, which took off the dirt and left the wood a lot happier. The bore was dirty, but cleaned up to a mirror. The working parts all needed a good dose of decent gun oil. The leather sling could have used some attention, but we left that to the owner. The rifle retained essentially all its Parkerizing, and the wood appeared to never have been refinished. We took off the upper hand guard and found pristine metal finish and wood interiors under it. If we owned it, we’d put some linseed oil inside the stock.

This was one heavy dude. It tipped the scale at just over 9.9 pounds, and would give anyone a good workout in extended offhand strings of fire. The metal finish was Parkerizing, and the wood was walnut. The bolt came out just like the 30-06 version, with a slight difference. The normal position for the bolt lock was up, and the normal bolt-removal position had the lock pointing out, away from the rifle. There were detents and a groove for those two positions. However, it was easy to override the bolt-removal position so the locking lever would go all the way down into the cut in the wood for the 30-06 version. In that position, the bolt would not come out, though it seemed to function correctly.

The action for this rifle was never cut for a 30-06. The space between the rails had never been milled out for the big cartridge. Between the action rails was a curved platform for the 22 bolt, and at the front of that curve was an opening for the five-shot magazine. There was no feed ramp. The cartridges stuck up just the right amount and fed perfectly into the slightly chamfered chamber. Extraction was by a lengthy stout catch on the right side of the bolt. Ejection was by a clever spring-loaded plunger within the left side of the bolt. The ejection force comes from how briskly the bolt is operated during the last fraction of an inch of its travel. For us, it worked perfectly, unless we didn’t use any force whatsoever, not a natural thing to do. Basically, empties cleared the rifle perfectly during all normal operations of the bolt.

The bolt body was made in two main pieces, the rear one having a big lug on top that was the locking lug. The two pieces were hand-etched or scratched on the bottom with the serial number of the action, and done in such a manner that the number was split in the middle. The cocking piece had a wing safety that, over to the right, locked the bolt completely. In the central position, we thought it would permit easy removal of the firing pin and cocking piece from the bolt. Those parts did not come out easily, so we left them alone. All the way to the left, the safety wing showed the word “Ready.” The tail of the striker was a huge serrated disk that is supposed to be for hand cocking. Why anyone would need this we could not figure. It was possible to hand-cock the rifle, but this required great force on that disk. The top of the bolt had “M2” stamped just in front of the locking lug, and the top of the bolt lever had “NS,” “M2,” and “B2” in three rows. NS stands for Nickel Steel, M2 for the model, and B2 apparently for the series.

The floorplate looked to be mil-spec, with holes cut in it for the magazine and its release. Again, it resisted disassembly, so we left it in place. The trigger guard appeared to be original ‘03 Springfield: milled, not stamped. The trigger pull was two-stage, 3 pounds for the first stage with a clean break at a total of 4.8 pounds.

The sights consisted of a Lyman aperture rear with a tiny-holed insert and a thin, flat-topped front blade pinned into the dovetailed front base. The front-sight blade was well protected by the sheet-metal hood. The sheet-metal front hood pulled off easily, though there were some signs of corrosion under it on the barrel band. The Lyman rear sight had a locking screw in front of the slide. This kept the slide firmly in place after we made an elevation adjustment. The aperture’s disk had a hole so tiny as to be essentially useless. A #49 drill (0.041 inch) would go through the insert’s opening but a #48 (0.042 inch) would not. After struggling with that tiny hole, we tried the rifle with the insert removed and did good-enough work with the rifle. Then we borrowed an insert from another aperture sight on hand. The borrowed insert had a reasonable-size hole that let enough light through so we could see the target. However, it didn’t really improve the groups we got with the insert removed. If we owned this rifle we’d secure an insert with a proper hole, or drill out the existing one to our satisfaction. With the provided insert in place, we spent a long time on each shot from our machine rest trying to get our eye centered and find the 100-yard sight through it.

We tested the rifle with several types of ammunition of match grade and one or two high-speed loads. These were Lapua Match Gold, Federal Gold Medal Match, Federal Target Grade (bulk), Winchester Hyper-Speed , and Winchester Power-Point (40-grain HP). We first checked the sights at 25 yards, and had to raise them two lines on the Lyman slide. This got the hits roughly centered at 100 yards. Then we shot five-shot groups from a machine rest at 100 yards. Our best groups averaged around three inches at 100 yards. The best accuracy was with Winchester’s Power-Point HP ammo (not the Hyper-Speed), with several groups close to two inches. We had hoped for better, especially with the Lapua and Federal Match ammo, but it was not to be. With a barrel and action that hefty, we doubt any bedding changes would help accuracy. Additional testing might find a preferred type of ammo. The biggest problem seemed to be the unsuitable sights, or our inability to get happy with them.

There were no malfunctions of any type. Ejection was clean, even with soft force on the bolt. Bolt operation was extremely smooth. Feeding was 100 percent. We could load single rounds manually with the magazine in place, which was handy. We noted some difficulty in getting the fifth cartridge into the magazine. We could see debris inside the magazine, so it needed to be cleaned. Incidentally, we found a notice online that says these magazines are rare, costly, and don’t come apart. So cleaning will not be easy. We gave it a good shot of WD-40, which helped.

Our Team Said: This rifle would be a great addition to any collection of fine firearms. Our sample cost $3000, and the short-stock versions go for about $2000. If you’re a collector who can find a similar rifle in essentially pristine condition like this one — full stock, retention of the front-sight hood, original sling, and clear markings on the stock — it might only need a careful cleaning to be a topnotch shooting collectible.

Written and photographed by