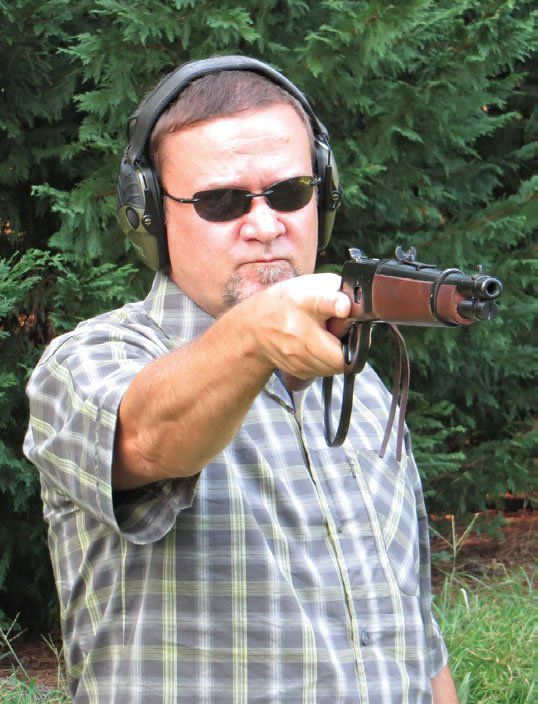 From 1958 to 1961, the TV Western series “Wanted: Dead or Alive” launched Steve McQueen’s acting career, and it also laid claim to the debut of a lever-action pistol nicknamed by McQueen’s character. Call it Hollywood magic or a TV set armorer’s clever idea, the Mare’s Leg as depicted by “Wanted: Dead or Alive” was a chopped-down Winchester Model 1892 rifle. The barrel was cut off just forward of the forearm, and the buttstock was lopped off just past the lever. The lever was also oversized, all the better to spin the shortened rifle around your hand. Please do not try spinning these shortened lever guns at home, as you might, at the very least, poke your eye out, or worse, do grave bodily harm. Also remember that Hollywood’s magic had Josh Randall, Steven McQueen’s character, wear 45-70 Gov’t. cartridges in his Mare’s Leg gun belt. The Model 1892 rifles were never chambered in that cartridge. TV Westerns back then were as popular as investigative crime shows are today and the Mare’s Leg made the lead character stand out in the crowd and leave a lasting impression.

There is definitely a cool factor with the Mare’s Leg, but it is an odd pistol to shoot. Using one hand means a shooter’s arm quickly fatigues, unless you have the biceps of a Navy SEAL. All the weight of the pistol is forward from the shooting hand, plus when shooting these types of pistols, you need to relax your wrist somewhat to absorb recoil. Mare’s Legs are heavier than a typical pistol — especially in this case, the Henry Repeating Arms Mare’s Leg Model H006MML ($975), which at nearly six pounds took some muscling to aim and fire one-handed. Using two hands on the Henry or the Rossi Ranch Hand Model RH92-51121 ($597) offered more stability, with one hand on the forend and one on the grip. We even tried shooting the pistols using a one-point Blackhawk Storm Sling (70GS12BK, $34), like you might use to shoot an AR pistol. Using a two-hand hold to pull the pistol away from our body, the sling acts like a brace for more stability. So equipped, we found these pistols shone as hip-shooting designs, lightning fast but with accuracy leaving something to be desired. Many testers with lever-action rifle experience found themselves trying to shoulder the weapon, but that is not comfortable or really doable since shouldering and then levering the action would cause the bolt to come back and poke you in the eye. Suffice it to say you can shoot a Mare’s Leg with one hand, but you need to use two hands to operate the pistol. Also, in case you were wondering, these are not NFA-controlled short-barreled rifles, which require payment of $200 for a tax stamp, approval from the BATFE and federal registration. A lever-action pistol is treated as a pistol by federal law, and most states allow the purchase of Mare’s Leg pistols. However, California and New York have banned them. We tested these pistols using the supplied iron sights and 38 Special and 357 Magnum ammo. Here’s what we found.

The Henry Mare’s Leg is an attractive looking pistol with a bright brass receiver, barrel band, and buttplate that contrasted with the blued barrel and lever loop. The receiver was constructed of solid brass and is drilled and tapped to take a scope mount. On the left side of the receiver was a “rattle ring,” more commonly referred to as a saddle ring. Try hunting with a saddle ring and you will soon realize why it is sometimes called a rattle ring. The American walnut grip and forend were nicely figured and well fitted to the metal parts. It was extremely well made.

The Henry is not a traditional Mare’s Leg, as it uses Henry’s proprietary Big Boy lever action that is super smooth to operate and features side ejection. A transfer bar safety mechanism is designed to only fire a round when the hammer is completely to the rear and the trigger pressed fully to the rear. This means the pistol can be safely carried with a round in the chamber. There is no half-cock hammer like found on other lever-action rifles. The loop lever must also be fully rearward to disengage the trigger lock. Also unusual in a centerfire lever action is the way the Henry’s tubular magazine is loaded. Just like a rimfire rifle with a tubular magazine, the knurled end of an inner brass magazine tube is rotated to disengage it from an outer steel tube. A cutout in the outer tube allows a user to load cartridges, dropping them rim first into the slot. The inner tube is then pushed back into position and twisted to lock it in place. It was just as easy to unload the Henry with the tube cutout. With the Rossi, the action needs to be cycled to unload. Loading was faster and safer with the Henry compared to the Rossi, in our estimation, but the Rossi was easier to top off with cartridges.

The lever loop was enlarged but not as big as the loop of the Rossi, and the heavy octagonal barrel was equipped with Marble sights. A brass bead was mounted on the front sight that was serrated just below the bead to cut glare, which it did. The adjustable rear could be knocked left or right with a hammer to adjust windage. Elevation was adjusted via a stepped ramp. These sights, as well as the Rossi’s sights, were very traditional. However, the Henry shot to its sights’ point of aim, unlike the Rossi’s.

The Henry had the smoother action of the two pistols, something we have come to expect from all Henry lever-action rifles. It was also heavier than the Rossi, which is another characteristic of the Big Boy series which we like in a rifle, but in a pistol, the weight fatigues the shooter when firing one handed.

Both guns needed to be levered briskly to ensure ejection and chambering of rounds. If the shooter tried to baby the lever, he could have a failure to eject and jam up the works. We worked the levers with pistols in a variety of positions to see if we could jam the mechanism. Only when we babied the levers were we able to jam the pistols with a failure to eject. When the levers were worked properly, both of these pistols performed exceptionally well. Because the Henry had a smaller loop, we were able to fire a follow-up shot faster than with the Rossi.

Our Team Said: The Henry shot to point of aim out of the box. Though it was heavy, the weight did help absorb felt recoil from magnum loads. The brass frame was attractive, the action smooth, and loading was easier than with the Rossi. The price was steep for novelty plinking gun, our shooters said, and they’re not SASS approved.

The Ranch Hand is a more traditional Mare’s Leg made from a reproduction Winchester Model 1892 action. The Rossi takes Hollywood’s lead on what a Mare’s Leg should look like. All metal parts were blued except the top edge of the two locking lugs at the top of the action, and the walnut stained hardwood made the Ranch Hand look like the TV show prop. With use, we saw the bluing wear near the pivot point of the lever, on the hammer and trigger. Not surprising. Wood-to-metal fit was good. The Ranch Hand closely follows ’92-style action design except for its round 12-inch barrel.

The front sight was dovetailed into the barrel just aft of the magazine ring and had a brass bead mounted on it. The rear sight was a semi-buckhorn style that could be adjusted similar to the Henry’s. The Henry’s sights were far superior to the Rossi’s. More on that later. The lever loop was larger and more circular than the Henry, so a user’s hand moved more before engaging it to operate the action. Because these pistols are not suited for defense — only in a pinch, a revolver in the same caliber would be a better choice — the speed of operation was not a concern.

Also different from a Winchester perspective was a manual safety located on the top of the action just behind the locking lugs. A small safety lever rotated 90 degrees to place the rifle in Safe mode or in Fire mode. In Safe mode, the action could be cycled to unload the pistol, and the hammer could be snapped forward via a press of the trigger, though the hammer does make contact with the firing pin, the firing pin is held back by the safety lever. The Rossi also has a half-cock notch on the hammer that blocks the trigger. The hammer was nicely serrated for a sure thumb cock or de-cock. Only using the combination of half cock and safety lever can the Rossi be safety carried fully loaded with a round in the chamber.

The left side of the receiver featured a saddle ring with a thong of rawhide to give it Western authenticity. We ditched the leather thong because we found it could, at times, interfere with operating the lever and touch the shooting hand. Some testers had no issue with it. On the right side of the receiver was the loading gate. Rounds were pressed into the gate and pushed forward to load the Rossi, as like any other ’92 rifle. Initially, we had difficulty loading 38 Special ammo into the tube. We must have worn off a burr because we did not have this issue toward the end of range testing. The Ranch Hand, like ’92 rifles and carbines, ejects empties from the top. Lowering the Ranch Hand from line of sight had a few testers getting hot brass flung into their faces. This is simply a characteristic of the action in combination of how it is fired and the lever manipulated.

In hand, the Ranch Hand was more compact and had much better balance than the Henry. We thought we might have a winner, except when we started firing it at the range. A dirt berm at the range allowed us to determine the Rossi shot about 16 inches high and 8 inches to the left. Elevation was easy enough to fix, but the rear sight was bottomed out so we had to guesstimate elevation from then on. Once we got our dope, we were able to get some darn good groups with the Rossi using a rest. Most ammo gave us, on average, about 1.5-inch groups. The lighter trigger was a benefit to accuracy.

Our Team Said: The Ranch Hand is similar to Hollywood’s Mare’s Leg and gave good service plus it was about half the price of the Henry. The sight gave us angst, and if we were to buy this gun, that would have to be resolved.

Written and photographed by