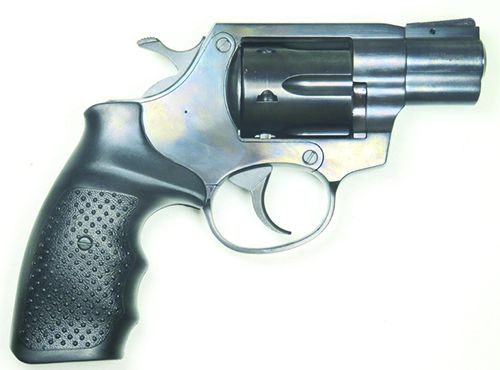 RIA imports the AL3.0 from Alpha Proj in the Czech Republic. We tested a target variant of one these revolvers years ago and it failed miserably. Our expectations were not high, but we test with an open mind. The finish on the RIA was suspect. The frame wore a blue/black color, but when the light hit it just right, it looked like a plum color. The crane specifically had a plum color. Not the best finish, in our opinion. The rubber grip is full size with finger grooves and a pebble finish and a palm swell. We liked these grips because it made the RIA more comfortable to shoot. It also made the revolver more difficult to conceal.

The 2-inch two-piece barrel features a full lug and enclosed the ejector rod. The edges on the lug are sharp, and we’d prefer more rounded edges for ease when holstering. The edge in the cut out for the ejector rod was sharp, too. The barrel assembly uses a barrel and steel barrel sleeve, similar to how S&W builds some of its revolvers. There is a slight crown on the muzzle. The front ramp sight is serrated and pinned in place. The rear sight is a groove milled in the top strap. The serrations on the ramp front sight really cut sun glare. The cylinder latch is similar to an S&W. Push is forward to swing out the cylinder. The latch itself was serrated yet smooth with a lip that provided leverage when pushing it forward. There are, however, big differences between the RIA and the Rossi and other S&W-like revolvers. What is different about the RIA is the way the crane mates with the frame. The RIA’s crane mates to the front side of the cylinder window, similar to a Ruger LCR or LCRx. It does not mate to the side of the frame like the Rossi, Colt, or an S&W. The cylinder only locks in the rear via a pin. The ejector rod is smooth. Also different is the ejector. It uses six nubs or peg-like protrusions for cylinder rotation. As the hand comes up during SA cocking or DA trigger pull, the hand connects under the nub to rotate the cylinder. Typical revolvers use a flat spiral type of protrusion. No doubt these design features cost less to manufacture the revolver. The cylinder rotates counter clockwise. The chambers are countersunk. The recoil plate is nearly to the outer edge of the cylinder, so it is difficult see if a chamber has a case in it or if it is loaded. 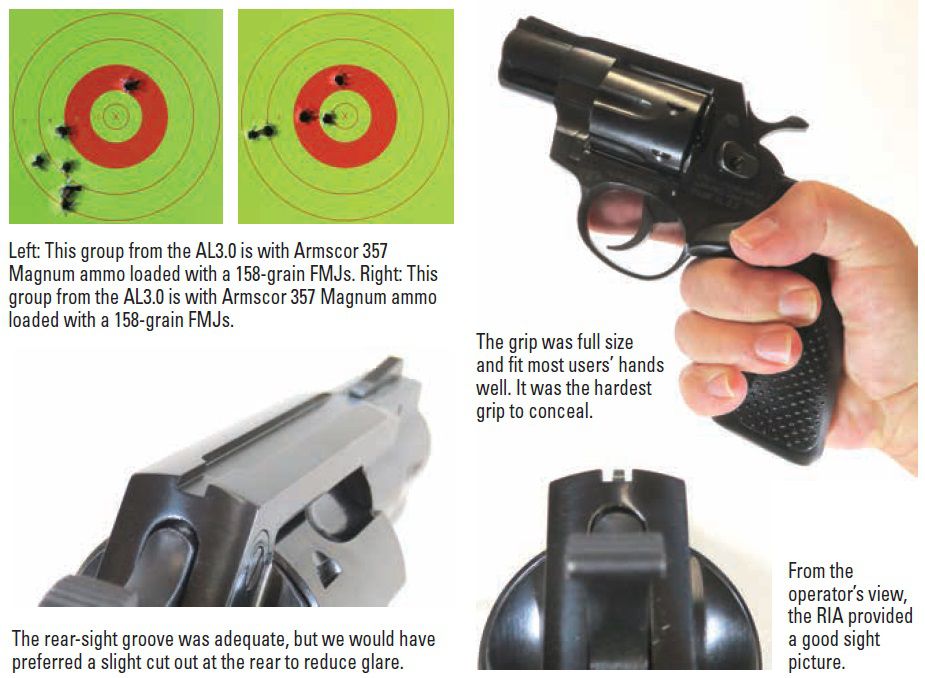 The trigger was wide and finely serrated. The ham­mer spur was wide and offered grippy serrations for cocking back the hammer. The internal safety system is a transfer bar, which means the trigger must be fully rearward for the hammer to hit the transfer bar and then the firing pin. The firing pin is mounted in the frame. Going hot, we were surprised at the accuracy of the AL3.0. It shot circles around the Rossi and Colt. Our best five-shot group measured 0.9 inches with the hot Armscor 357 Mag ammo loaded with a 158-grain FMJs. With the 38 Special Hornady load and the 38 Special +P SIG load, the average five-shot groups measured 1.5 and 1.8 inches, respectively. In hand, the AL3.0 is hefty. At 35.6 ounces loaded, this revolver’s weight helps reduce felt recoil. Between the full grip and heavy weight, it made the AL3.0 comfortable to shoot even with hot magnum loads. For speed shooting, the RIA allowed us to stay on target and manage recoil. We did encounter a slight bit of stacking with the RIA, and, overall, the trigger pull was fairly smooth and consistent. Stacking occurs when firing a revolver in DA mode. The user can feel extra resistance as the trigger is pulled through a full DA stroke. This is caused by the coiled mainspring compressing. The DA pull took over 11 pounds, and it felt like it. We would have preferred a lighter DA pull. SA pull required only 4 pounds, and that was more acceptable for accurate shooting. The ejector-rod stroke on the AL3.0 is not long enough to fully eject empties, so remember to use a gravity assist. We had no issues discharging brass.

Our Team Said: The AL3.0 had really good accuracy. We appreciated the weight and full grip when shooting invigorating magnum loads. The weight and full grip make it harder to conceal carry, but in our opinion, this could make a good mid-priced wheelgun for home defense. We dinged it half a grade due to the inconsistent finish. Special thanks to Eastern Outfitters (EasternOutfitter.com) of Hampstead, NC, for their assistance.