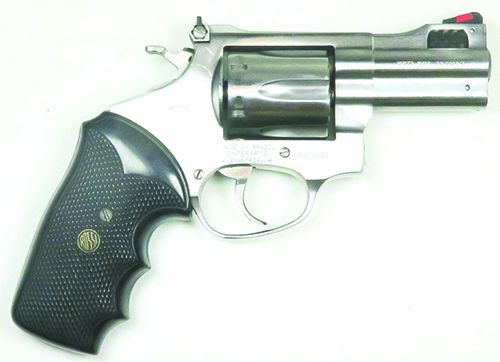 The Model 971 VRC (Vent Rib Compensated) is a used revolver that is fairly common to find on GunBroker.com and GunsAmerica.com auction web­sites. This model was manufactured from 1996 through 1998 and imported by Interarms. The 971’s size and function is similar to a Smith & Wesson K-frame but with a J-frame sized grip. Our sample was made from stainless steel and wore a bright finish. The grip is checkered rubber with finger grooves and slight palm swell similar to a Pachmayr Gripper grip. We liked the heft and feel of the Rossi. It was also the heaviest revolver, weighing 33.8 ounces unloaded. The barrel has a similar design as the Tracker series of revolvers by Taurus, with a ported chamber about 0.8 inches deep at the muzzle. This chamber is counterbored, so it is not rifled. There are eight ports that spew gases and help keep the revolver from flipping when fired. Four ports are located at the 1 and 11 o’clock positions. We thought the ports did a good job of helping us get back on target when shooting for speed. The barrel also has a full lug, which helps give the Rossi some heft. This weight makes firing with hot 357 Magnum loads more tolerable. The front sight is a pinned, serrated ramp with a red insert similar to what S&W equipped its revolvers with a decade or so ago. The rear sight is a white-outlined notch that is adjustable for windage and elevation, and the rear face of the sight is serrated to reduce glare. Whoever owned this revolver before us must have had eye-dominance issues because this revolver grouped beautifully, but 4 inches to the left of point of aim. We easily adjusted the sights even though there were no indication for up/down and left/right. Between the sights is a wide rib that is serrated. On longer-barreled 971 variants, this is a ventilated rib. We noticed the there was a sharp corner on the frame where the barrel screws into the frame. This is due to a chamfer milled into the rib but not on the topstrap. We also found some sharp edges on the muzzle edge of the under lug that made reholstering a bit more difficult. We checked gap and bore to chamber alignment prior to shooting and found it in spec.

The cylinder latch is full size and is pressed forward to swing out the cylinder. The cylinder locks in place at the rear and in the front via a pin that protrudes into the ejector rod. The end of the ejector rod was knurled. Frame-to-crane fit was good, as was the side plate fitted on the right side of the revolver. There was only a slight wiggle in the cylinder. Lock up was tight. The trigger was wide and smooth. The hammer spur was large, with plenty of toothy checkering for a sure grip. The firing pin is housed in the hammer like old-school revolvers, and the Rossi uses a hammer-stop internal safety. The trigger needs to be fully to the rear to allow the hammer and firing pin to fire a round. 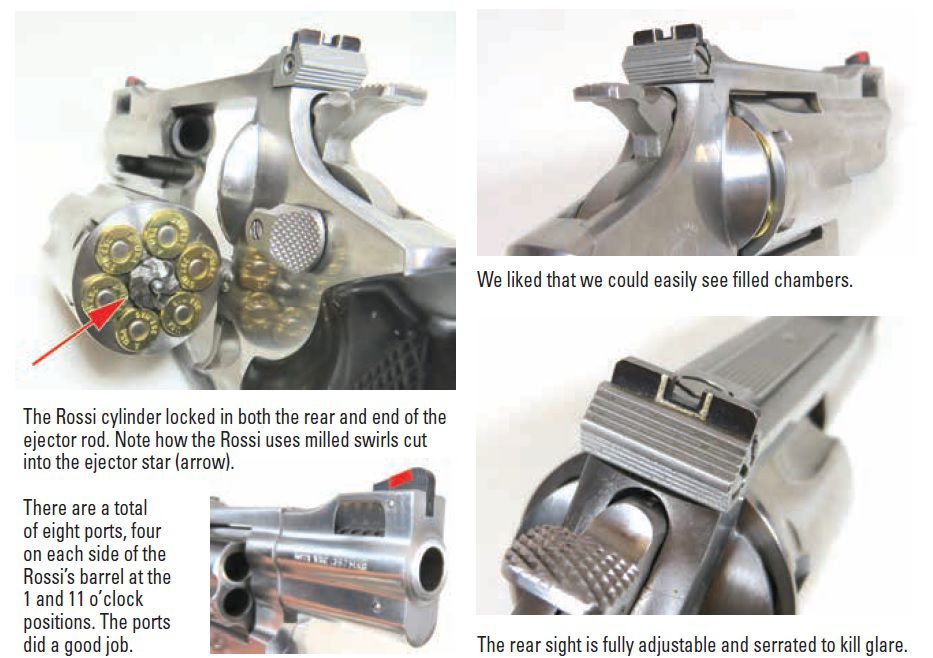 Going hot, we found the trigger in DA mode required 11 pounds of finger pressure to work back and then fall. The pull weight, however, seemed less, due to the fact the trigger pull was smooth with nearly no stacking. In accuracy testing, the best five-shot group measured 1.3 inches with the Armscor 357 Magnum loaded with a 158-grain FMJ bullet. The average accuracy was 2 to 2.5 inches and is fine for self-defense situations. In the speed-shooting phase of the test, the Rossi showed less muzzle rise than the other revolvers. The weight of the Rossi helps with felt recoil. With 38 Special ammo, the Rossi is a pussycat to shoot; with hotter 357 Magnums, it is very tolerable, making the Rossi the most comfortable revolver to shoot with hot loads. We did note in the data that the velocity and energy were less than the Colt with the longer barrel. The Rossi’s numbers were a bit higher than the RIA’s numbers. Empties were easily ejected and with no issues. The 971 VRC was carried in a nylon Uncle Mike’s Inside the Pant holster. This revolver does make its presence known compared to light-weight aluminum-framed 357 revolvers. That’s part of the trade off with these heavier revolvers: more comfortable to shoot, less comfortable to carry. Our Team Said: The 971 VRC is a low-cost alternative to a more expensive and new 357 Magnum. Though accuracy was not stellar, it was good enough for self defense. We liked the ported barrel’s ability to help keep us on target and the great trigger. If you find one in good condition, this could make a good self-defense revolver. Written and photographed by Robert Sadowski, using evaluations from Gun Tests team testers.