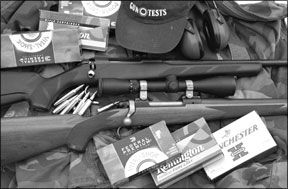 The .300 Magnum is eternally popular, for reasons some of us don’t fully understand. The .300s don’t give you a lot more of anything—except expense—than you can get from the .30-06. Those wanting more rifle than the ‘06 are better served with larger bores, not just more gas. But many shooters don’t understand that. Far be it from we gun testers to dictate the choices of those who like the blast of the various .30 magnums. Today there are a bunch of these, by Weatherby, Winchester (2), Dakota, Remington, and of course the original, by Holland & Holland, still viable after close to a hundred years. In this test we look at two cartridges in two rifles, the .300 WSM in Beretta’s Tikka T3 Lite ($595), and the original .300 Winchester Magnum cartridge in Ruger’s Hawkeye ($779). Both rifles are offered in at least two stock materials, synthetic or wood, and both have stainless-metal variants. We chose a synthetic-stocked, blued Tikka and the wood-stocked, blued Hawkeye. Let’s take a look at how they stacked up.

Right off the bat we noticed the hard recoil pad on this relatively light, Finnish-made rifle. We were quite sure it would test our shooters’ shoulders, but we’d have to wait until the actual shooting for our final pronouncement on the pad. The pad might have magic, like Ruger’s new yet thin pads, and might not hurt us, but we’d be surprised. The rifle was indeed light, at 6.4 pounds without scope. That was good news to those of us who realize most hunting involves lots of walking and not much shooting. The Tikka had a detachable magazine that did nothing for the looks of the rifle, but it was made of plastic and was extremely light, and that was also all to the good. The mag held three of the fat .30-caliber rounds. Unlike the magazine on Sako rifles, which require a trick to remove, the Tikka’s came out in a straightforward manner by pressing a lever at the front of the box.

The metalwork was not fancy, but presented a decent matte finish with a decent bluing job. Though the barrel and action were both of steel, the finishes were slightly different, though not enough to matter to the serious hunter. The bolt and trigger were finished in the white, the sole bright spots on the rifle. The 24.4-inch barrel was free floated from about 3 inches forward of the tasteful, octagonal-section action. The top flat of the action was machined to form a rail-type scope base, and—wonder of wonders—the Tikka came with scope rings. The forward one of these had a downward-protruding lug that fit into a hole on top of the action to prevent the scope moving rearward under recoil. This was a simple, invisible solution to what can be a knotty problem with light rifles.

The matte-black stock had sculptured lines on forend and butt that broke up the plain look so common to plastic-stocked rifles. Also, the forend and pistol grip areas were covered with raised and elongated dots that served for checkering, similar to what we saw recently on the Beretta Neos pistol. On the rifle this looked a bit like basket-weave checkering. It worked well enough, wet or dry. The pistol-grip area also had a modest palm swell on each side. So far as we could find out, there are no left-hand-dedicated versions of the Tikka. However, the stock was fully ambidextrous, if the bolt was not.

The cocked bolt displayed a red dot on a protrusion beneath the rear of the bolt shroud, and the two-position safety (forward to shoot) also showed a red dot in the firing position. Bolt removal was extremely simple. Press a lever on the left rear of the action and out comes the bolt. The bolt had two lugs, a recessed face, and a simple, short extractor that worked in conjunction with a sprung plunger for ejection. The trigger pull was typical Sako: clean, crisp, excellent, with a break at 2.9 pounds. Not many production-rifle triggers can match that. Workmanship was quite simply excellent everywhere we looked. How this rifle can sell for roughly one-third the suggested price of the Sako Model 85 is beyond us.

One commonly quoted “attribute” of the short magnum cartridge is that it permits a shorter action, which means a lighter rifle. But the Tikka’s action was actually longer than that of the Ruger, and had the same-length opening for its ejection port. Also, the Ruger had a huge opening with not much metal on top of its action, while the Tikka design had metal surrounding the entire magazine but for the ejection port. Yet the Tikka was far lighter.

We mounted our new Nitrex 3-9X in the Tikka mounts and it was time to go to the range. We tested with three loads. They were Remington Core-Lokt 150-grain, Federal Premium Vital-Shok 165-grain Nosler Partition, and with Federal 180-grain Power-Shok. We began with the 150-grain bullets, though we had guessed the heaviest bullets would give the best results with the slightly faster 1:11-inch twist of this rifle over most .30s. We got both excellent velocity — a shade under 3200 fps — and useful if not stellar accuracy with the Remington Core-Lokt 150 grainers. Our average group size was 2.3 inches at 100 yards. Switching to the 165-grain Nosler Partitions as loaded by Federal, accuracy improved, but velocity didn’t drop much. All groups were under 2 inches, and bullet speed was a surprising 3150 fps on average. With the heaviest bullet we got what we were expecting, sub-inch groups. The worst group was 1.6 inches with these 180-grain slugs, and velocity was nearly 100 fps faster than the same-weight bullet in the .300 Win. Mag.

We quickly found the Tikka to be a very pleasant rifle in all respects. The magazine was a dream to load, similar to a large handgun magazine but far easier to get the rounds in. The rifle handled 3+1 shots extremely well, and we quickly found the excellent trigger pull to be a great aid to shooting small groups. Recoil was not in the least bad, thanks to our heavy winter clothing, but we would have noticed nasty recoil despite that. This was a splendid rifle.

Our first impression of the Hawkeye was that it was very heavy, compared with the Tikka. In fact the Ruger weighed just under eight pounds, 1.5 pounds more than the Tikka for the same horsepower. We’ve shot .458s that weigh just eight pounds, so we suspected the Ruger would prove to be too heavy for our shooters’ tastes, though recoil would not be a problem. We note that Ruger does in fact offer a fully left-handed version of the Hawkeye in this and a few other calibers.

The walnut-stocked, blued Ruger was mighty handsome. Very decent wood was combined with superlative metal polishing and matte bluing to produce a classic, timeless look, and the excellent, perfectly done, wrap-around checkering did a lot for the look and feel of this rifle. The stock finish was also very well done, and tough as nails. The overall appearance was like that of an oil finish, but was far harder than traditional linseed oil. The pores were well filled, yet the grain shone through well.

The controlled-feed bolt and extractor were finished in “Ruger Gray,” as was the trigger. Like the Tikka, the Ruger had sling studs on forend and butt stock, and like all Rugers came with scope rings for the integral bases. The Hawkeye had the latest thin red Ruger recoil pad. We tested this pad on the .375 Ruger Hawkeye in June 2007, and we found it to be excellent. By the way, the .375 Ruger weighed just 7.6 pounds, less than this .30, and recoil was not a problem at that power level.

The Hawkeye’s 24-inch barrel was relatively thick for all of its 24-inch length. It was floated, but in a way that looked like full-length bedding. The forward end of the stock gave upward pressure onto the barrel, which generally makes for better accuracy. We submit that because the .30 magnums offer more bullet speed than may be had from the .30-06 and not much else of value, this rifle could have had a 26-inch tube of slightly slimmer proportions to give the same, or less, weight. That longer barrel would help let the big .30 come into its own by giving more velocity with all loads. But we didn’t design this rifle.

The trigger pull averaged 5.5 pounds, way too heavy, we thought, though it was fairly clean. We have yet to hear of a gunsmith-service outfit that offers an adjustable trigger for the new Ruger design, which it surely needs, according to our reports. All new Ruger triggers seem to have excellent but too-heavy pulls. Bolt operation was slick, and the bolt came out easily just like on a Mauser 98. Lift the lock at the left-rear corner of the action and out it comes. The big extractor would indeed jump over a round laid into the action and shoved loosely into the chamber, but the rifle liked it better when rounds were fed from the magazine so the cartridge rim could slide up under the extractor’s hook. The hinged floorplate was handy, and the magazine held three rounds. Twist rate here was 1 turn in 10 inches, versus 1 in 11 for the Tikka.

With our Nitrex 3-9X scope mounted in Ruger’s rings, we now had a 9-pound rifle. We headed for the range. We tried to keep this test as close as we could to the .300 WSM test. To that end we shot with the same three bullet weights, 150-grain Remington Core-Lokt, 165-grain Federal Premium Vital-Shok loaded with Nosler Partition bullets, and with 180-grain Winchester Power-Point JSN. We found loading the magazine was nowhere near as slick and easy as that of the Tikka, but was not all that difficult. Our first shots with 150-grain ammo proved two things. The Ruger liked light bullets, and the trigger was indeed a heavy handful. Groups averaged 0.9 inch. We did not like the trigger, the Tikka having spoiled us. Recoil was not quite as pronounced as with the Tikka. Moving on to the other, heavier, bullets, the Ruger did not fare so well. We got groups around 2 inches. We had hoped the Hawkeye would be a tack-driver, which would have to some extent justified its heavy barrel. A heavy barrel combined with great accuracy can mean lots of shooting fun all year-’round. But that was not the case, at least not with serious-weight bullets.