In spite of what some people may say or think, we feel a semiautomatic rifle is a worthwhile hunting arm. A bolt-action rifle may work just fine for most hunters, but manually-operated firearms are extremely difficult, if not impossible, for physically disadvantaged people to use. Also, a semiautomatic rifle’s ability to deliver a fast follow-up shot can prevent wounded game animals from suffering needlessly.

There is, of course, a downside to the semiautomatic rifle. It typically weighs about 1/2-pound more than most bolt-action sporters, making the gun tiresome to carry around for any length of time. However, the .30-06 Springfield rifles in this test solve the weight problem. They are the Browning BAR Mk II Lightweight and the Remington Model 7400 Carbine.

As its model designation suggests, the Browning BAR Mk II Lightweight is a lightened version of the manufacturer’s standard BAR Mk II Safari rifle. The weight reduction is achieved by making the receiver of an aluminum alloy, instead of steel, and shortening the barrel to 20 inches. This $730 gas-operated semiautomatic rifle features a detachable four-round magazine on a hinged floorplate, open sights and a rotary bolt. It is available in four non-magnum calibers from .243 Win. to .30-06 Springfield.

The Remington Model 7400 Carbine is this maker’s standard semiautomatic rifle with a shorter 18-1/2-inch barrel. It is only available in one caliber—.30-06 Springfield. This $573 gas-operated rifle utilizes a steel receiver and a rotary bolt. Other features include a detachable four-round magazine, open sights and a Monte Carlo-style stock.

In our opinion, the workmanship of the .30-06 Browning BAR Mk II Lightweight we acquired for this test was very good. The alloy receiver and trigger guard had a matte black finish, while the steel barrel was brightly blued. The steel bolt had a matte grayish-white finish. No tool marks or sharp edges or found. Moving parts had little or no unnecessary movement.

The Browning’s two-piece stock was made of select walnut with a high gloss finish. Its checkering was somewhat dull, and the cuts on the pistol grip were ragged in several places. However, the black rubber recoil pad with a black spacer and the blued steel swivel studs were expertly installed. In wood-to-metal mating, the only gaps present were one at the rear edge of the forend, intended to permit the hinged floorplate to move freely, and another around the back of the trigger guard, intended to allow the removal of the trigger assembly. The barrel wasn’t free floating.

We considered the Remington Model 7400 Carbine’s metal and wood work to be average. The receiver had a polished blue finish and engraving-like decoration, consisting of a ram game scene on the left side and a moose scene on the right. The blued barrel was brushed to reduce glare, while the aluminum alloy trigger guard had a dull black finish. Some minor tool marks were noted on the underside of the bolt and on non-critical areas inside the receiver. There was a small to moderate amount of play in moving parts.

This Remington’s two-piece walnut stock had a uniformly applied satin finish. Its checkering was sharp and very neatly cut. The bottom of the pistol grip was painted black to make it look like the grip had an end cap. Installation of the black plastic buttplate was adequate, but not what we would call close. There were no swivel studs to permit the attachment of a sling. In stock-to-metal mating, the space along the left side of the non-floating barrel was about three times larger than the space on the right. We felt the gap at the rear of the trigger guard was larger than needed to aid in the removal of the trigger assembly.

Weighing 7 pounds and measuring 41-5/8 inches long, the Browning was lighter and longer than the Remington. It was also a little less muzzle heavy, but still had enough forward heft for good muzzle stability. Shouldering and target acquisition were fast and natural. The rubber recoil pad was non-slip and lessened felt recoil, but our shooters didn’t care for its squared edges. Although the straight comb afforded a very good stockweld when using the open sights, it permitted mostly jaw contact when using a scope.

The Remington weighed 7-1/4 pounds and was 38-3/4 inches long, which afforded above average muzzle stability. Shouldering and target acquisition was nearly as fast as the Browning, but not as instinctive. The plastic buttplate was slippery and did nothing to reduce the kick generated during recoil. The elevated comb provided a very good stockweld when using a scope, but our shooters thought it was a little too high with the open sights.

Each rifle was equipped with a crossbolt safety at the rear of the trigger guard. When pushed from the left to the right, the safety prevented firing by blocking the trigger sear.

The Browning BAR Mk II Lightweight’s other controls worked more conveniently than those of the Remington. When moved rearward, the magazine catch in front of the trigger guard unlocked the back of the hinged floorplate. Once open, the magazine snapped on and off the floorplate. When pushed downward, the bolt release at the right rear of the forend permitted the bolt to move forward to the closed position.

Controls on the Remington Model 7400 Carbine worked as intended. When rocked forward, the magazine release at the right front of the trigger guard unlocked the magazine. The bolt release was a rounded tab on the left side of the magazine, near the bottom. Pushing it forward lowered the back of the magazine’s follower, which then allowed the bolt to close.

Our shooter’s considered the Browning’s trigger movement to be acceptable, though it could have been about a pound lighter. After a small amount of creep, the pull released cleanly at 5 pounds. There was a little overtravel. The gold-colored trigger had an ungrooved 5/16-inch-wide face with comfortably rounded edges.

Movement of the Remington’s trigger was lighter than the Browning, but not as clean. Its pull had a moderate amount of takeup and a mushy 4-1/2-pound release. There was a noticeable amount of overtravel. The blued trigger had an ungrooved 1/4-inch-wide face, with square edges that weren’t especially comfortable.

We felt the Browning BAR Mk II Lightweight’s open sights were first-rate. The front was a hooded blade with a bead-shaped top and a gold-colored face. It sat on a 1/2-inch-high ramp. The rear had a large face with a U-shaped notch, which could be adjusted by turning micrometer windage and elevation screws. These very large screws made adjusting the sights a snap. This system provided a well-defined sight picture.

The Remington Model 7400 Carbine’s open sights were, in our opinion, adequate. The front, a blade with a bead-shaped top and a white face, sat on a 3/8-inch-high base. The rear, a sliding blade with a U-shaped notch, sat on an inclined base. After loosening the appropriate screw, the rear sight could be pushed in the desired directions for windage and elevation adjustments. Adjusting the sights was tedious. This arrangement provided a useable sight picture.

The top of each rifle’s receiver was drilled and tapped for a scope mount. For accuracy testing, we installed Burris 3-9X Mini scopes on both guns using one-piece bases and Redfield-type rings (not included with the rifles).

Regardless of the ammunition used, the Browning’s functioning was 100 percent reliable. The bolt automatically locked open after the last round was fired, and stayed open when the magazine was removed. Furthermore, the bolt could be locked back manually with or without the magazine installed.

During the firing phase of this test, the Remington didn’t malfunction. However, all of our shooters felt its bolt hold-open system was primitive and needed to be updated. The bolt locked open directly on the magazine’s follower. So, the bolt didn’t stay open, and couldn’t be locked open, when the magazine was removed. Furthermore, when the bolt was locked back, the resulting pressure on the magazine made it extremely difficult to remove. According to the manual provided with this rifle, the bolt should be closed before removing the magazine.

We judged the Model 7400 Carbine’s accuracy to be only adequate. At 100 yards, its smallest three-shot average groups of 2.28 inches were produced with Remington 125-grain PSPs. Groups opened up to 2.45 and 2.85 inches with the Federal 150-grain and Winchester 165-grain loads, respectively.

Chronograph testing showed that the Browning’s average muzzle velocities were 61 to 91 feet per second faster than those of the Remington. In our opinion, this difference probably won’t be significant at the moderate ranges these .30-06 hunting rifles are intended to be used. 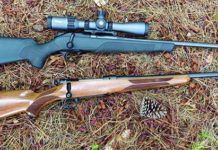 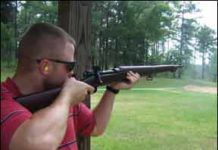 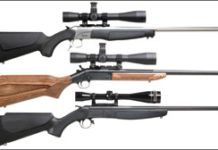