With everything going on in the world today, interest in self-defense rifles has skyrocketed. Until recently, semi-automatics were flying off dealer shelves and prices were sometimes double what such guns sold for only nine months ago. Naturally, many shooters are having trouble finding what they want, which usually means rifles that can accept standard-capacity (20- or 30-round) magazines. However, you may be able to find and more easily afford a category which well loosely call low capacity rifles – e.g., those made for single-stack magazines and which arrive from the manufacturer with 10-round magazines.

We recently tested a couple of lo-cap rifles to see if they could live up to their standard-cap counterparts that can be so hard to find. The Century International Arms N-PAP M70 7.62x39mm, $750, is an AK-47 manufactured by Zastava, a Serbian arms manufacturer, and its receiver is cut to accept a single-stack magazine. Our test gun came with two plastic single-stack 10-round mags. Going head to head against the PAP is the K-VAR VEPR AK-47 imported by Arsenal. The VEPR has a reinforced receiver manufactured by Molot in Russia and and ours came with two plastic 10-round mags. Both rifles can be modified to take standard AK-47 magazines, but in some states that is not an option now, so we tested both in their as-delivered capacity. Heres how our testers assessed them:

The Century PAP is the other major option for an imported rifle from Century, with the WASR-10 being the more well known model (May 2013). The WASR has a rough-and-tumble look and feel, so we wanted to know if the cleaner-looking N-PAP could hold true to the same operational standards.

This gas-operated semi-auto had an overall length of 36.5 inches and stood 7.5 inches tall with a 10-round magazine inserted. Unloaded with an empty magazine, it weighed 8.4 pounds; with a full 10-round magazine, it tipped the scales at 8.9 pounds. The steel barrel was 16.5 inches long and had a black Parkerized finish, and the steel receiver was likewise finished. The stained-maple buttstock was finished with a soft-rubber buttpad and an adult 13.5-inch length of pull. The front handguards can be interchanged with those from a Yugo M70 (thus the name similarity). One of the nicest features was a notch cut in the safety lever, which allowed the shooter to hold the bolt open while on Safe.

Cosmetically, the stained maple stocks are a clear upgrade from the hardwood on the WASR models, but it didnt match up to the walnut on the VEPR, our shooters said. The stock shape was also something we noticed, though not in a good way. The sight picture (rear notch) for 100 yards sits very low, and the stock rises up just a touch too high, leading the shooter to have to heavily press his cheek into the stock to get lined up for that distance. We adjusted as much as we could, but couldnt shift down enough to fully compensate. Thus, we had a very sore cheek after a day at the range. Cheek pressure at other distances wouldnt be an issue because of the way the elevator sight moves up.

Century put a Tapco trigger in the PAP (3.10 pounds), an upgrade we enjoyed and which we believe helped the PAP shoot well out of the box. The trigger shoe was wide and smooth and had a deep bend that made operating it comfortable. The trigger movement had a slight hitch about halfway through, but it wasnt noticeable if the shooter moved the trigger smoothly from start to finish.

The sights were on target and needed little adjustment. If they had needed adjustment, the Gunsmith AK Sight Tool AKFST made by Magna-Matic (Brownells 100-005-934WB, $31) is an easy way to accomplish both adjustments by moving the front-sight post inside the tower. It also worth considering a windage-adjustable rear sight, either a V or aperture.

We had no malfunctions or failures using both American and Russian 7.62 rounds. The PAP sent brass all over the right side of our bay at the range, but didnt dent any casings, so it should be a solid choice for shooters who want to reload.

We shot well with the PAP and had some of our tightest groupings with it, although the ergonomics wore on us. The N-PAP shot Winchester White Box 123-grain FMJs the best, firing average 50-yard groups of 0.9 inches compared to the VEPRs 1.5-inch mark with that ammo. The Century also liked the Tul-Ammo 122-grain FMJs better than the VEPR, shooting 1.4-inch groups on average compared to the VEPRs 1.8-inch average accuracy. Only with the Hornady Steel Match did the K-VAR outshoot the Century, 1.0 inch to 1.7 inch on average.

Our Team Said: Overall, this lo-cap model impressed us with the no-frills reliability we have come to expect from AK-47s, although we would recommend some upgrades to make this a more comfortable rifle. The other major upgrade to consider is having the receiver cut to accept double-stack standard-capacity magazines.

This is not an option for shooters in some states, but those who can probably should. We had forgotten how much of a pain in the thumb loading single-stack rifle mags all day can be. Making this change requires gunsmithing, so prices for the modification will vary by area.

The VEPR rifle is manufactured in Russia by Molot, evident by the broken English in the owners manual. Imported by Arsenal and distributed by K-VAR, this is an eye-popping AK-47, one we hoped would perform as good as it looked.

The first thing we noticed about the 36-inch-long VEPR is that it almost didnt look like an AK – billed as a hunting rifle, it looked the part. The 14-inch-LOP thumbhole stock and extended one-piece handguard, along with the larger recoil pad on the buttstock, made for a comfortable day at the range, especially in comparison to the PAP.

Built on the same standard as the RPK-style machine guns, the VEPR receiver is half again thicker than a standard stamped AK rifles receiver, which translates into a heavier tote for the person afield – unloaded weight was 8.9 pounds, and fully loaded weight was 9.4 pounds. This heavier-duty metalwork is accompanied by hammer-forged chrome-lined RPK-style barrels, which we thought would translate into better accuracy, but didnt. Perhaps that was due, in part, to the 5.10-pound trigger pull.

The sights on the VEPR are adjustable for both windage and elevation, which was needed since, out of the box, we were off the target low right. Once we adjusted properly, we had very nice groupings with the VEPR and enjoyed our time behind the sights.

Reliability matched up to the AKs reputation, as we had no malfunctions or failures with the VEPR, and the chrome-lined barrel makes cleaning after that corrosive surplus ammo a breeze. The VEPR sent brass in a slightly more controlled forward right direction, and we had no dented brass.

Capacity upgrades are also an option on the VEPR as well, and they should not be as costly as those on the PAP. The necessary changes for the VEPR to take standard magazines are internal changes, since the lo-cap mags are already double stacks. Tactical additions are always an option, and the beautiful walnut stock and forend can be swapped out, but if you want a tactical AK, we think there are better options to start with than the VEPR.

Our Team Said: Out-of-the-box performance of the VEPR was impressive, and we feel its a great option for those who want a nontraditional AK. As a hunting and range rifle, we feel the VEPR is an great choice for anyone in the market for a reliable imported AK dressed up in a black tie.

These two lo-cap AK-47s are a great contrast to each other, showing what the most popular rifle in the world can or could be. The low-capacity builds provide options for those whose local laws prohibit standard AKs, but the upgrade paths for both allow for nearly endless possibilities. We would be happy to add either of these rifles to our collection; the choice comes down to what the shooter wants in an AK variant. 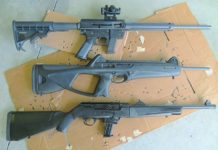 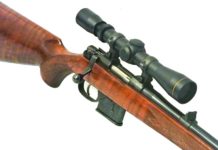