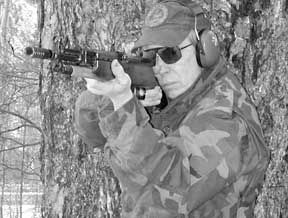 The SKS is a homely brute, and many of its simple mechanisms are largely outdated by today’s weapons’ standards. But it works. It, like so many rifles based on the tapered 7.62 x 39 round, catches the cartridges that its two-piece bolt strips out of that fixed, ten-shot magazine with great ease. It fires them reliably and slings out the empties like an outraged matron encountering last week’s garbage. The accuracy isn’t generally good enough to be called that, unless you’ve got a lucky specimen on your hands. On average, they seem to shoot M1-Carbine-size groups. They’ll put most of their shots into a four- or five-inch circle at a hundred yards, and that’s plenty good enough for their intended job. But you’d never write home to mama about how attractive a rifle an SKS is.

Some time back (October 1999), we reviewed one of these Simonov-designed semiautos in a test of three different types of rifles that could handle the 7.62 x 39 round (the others were the AK-47 and Ruger Mini-30), and in our report we liked the arsenal-refinished Soviet-made SKS, and suggested you grab one if you could find one. In December 2000, we looked at four others, three from Romania and one from the USSR. In that report, we told you some of the things to look for when considering an SKS. We found an ugly duckling in that batch that was an excellent shooter, and one of our test crew bought it for about $150.

Since then, we note some of the sources for the SKS’s are drying up, particularly those from the USSR, and prices for good SKS rifles — no matter their origin — are slowly going up. The Chinese versions no longer take up table after table at most gun shows, and gone are the “deals” that gave you a rifle, sling, handful of accessories, and a few boxes of ammo all for less than a C-note. But we did find some “new” SKS’s. Both of the rifles we tested qualify as Curio and Relic (C&R) guns, so if you have a C&R license ($30 license fee), you can order directly from the distributors and save some money.

Here we look at an Albanian SKS (about $250), complete with tent-peg bayonet, and one from Yugoslavia (about $200) with a knife-type bayo and a grenade launcher. Were they any good? Let’s find out.

Albanian SKS, about $250
After two solid hours’ disgusting labor removing all the packing grease (we hesitate to call it Cosmoline) from all the parts and wood, which required complete disassembly of the greased-up rifle, we found we had an attractive rifle on our hands. The bore was pristine. The wood was attractive, orange-hued hardwood (we suspect it was European walnut) that carried an honest dent and gouge here and there, but not so many as to be disastrous. The metal was well blued, not Parkerized, though the metal appeared to have been rebuffed, presumably an arsenal refinish. Many of the rifle’s parts bore five-digit numbers, and they all matched.

The trigger pull was as fine as we’ve seen on a military rifle, much better than on many a commercial firearm. The safety, that bit of curved steel to the right of the trigger within the trigger guard, worked easily and positively. We can’t help but notice the similarity of this safety’s motion to that of the commonly seen (later) M1 Carbine safety. Both can be easily manipulated by a right-handed shooter with his trigger finger, and both can result in the finger’s rapid placement onto the trigger, which can easily fire the piece when you’re not ready for it.

Like all SKS’s this one had a ten-round attached magazine that can be filled with stripper clips, or by individually inserted rounds. The contents of the magazine can be dumped by pulling rearward on a tab located in front of the trigger guard, just behind the mag box. We have long thought the combat drill for these weapons would be to shoot as many rounds as needed. Then, in any lull in firefight activities when it’s time to reload, the shooter could either a) dump the magazine’s contents, close the magazine, eject the chambered round (thereby locking the bolt back), and recharge ten rounds via stripper clips; or b) surrender. There is no easy way to lock the bolt back with rounds in the magazine. Therefore, if you’ve fired six or seven shots, leaving one in the chamber and two or three in the mag, there’s no quick way to fully charge the rifle. As we are taught at modern gunfighting schools, it is mandatory to reload the firearm fully at every opportunity, and proper training includes learning this drill. With a modern firearm’s detachable magazine, it doesn’t take long at all to reload.

The SKS operates by bleeding gas off through a hole in top of the barrel. The gas then drives a pushrod rearward, which strikes another pushrod (contained beneath the rear sight), which drives the two-piece bolt back against its mainspring. The bolt carrier moves first, and as it moved rearward it releases the main bolt and then lifts it out of its recess in the action, and the two then move rearward to eject and reload in the normal manner.

Takedown is easily accomplished by turning a lever on the rear of the action and pulling it out while simultaneously pressing forward on the rearmost part of the action, on what is actually the bolt-spring cover. With the pin out of the way, the cover slides off the gun rearward, and then the bolt spring and bolt can be removed. The barrel can be cleaned from the breech. Further disassembly is seldom needed, but the two gas pushrods may be easily removed by rotating a lever on the side of the rear sight. This permits removal of the upper hand guard and then the stiffly sprung pushrod within the sight base.

The rifle’s sights were simple, giving a post front and U-notch rear as seen by the shooter. The rear was ramp-adjustable for elevation, with battle markings out to 1,000 yards. Although aftermarket scope mounts exist that replace the bolt-spring cover, we used the existing iron sights for our shooting evaluation, with the sights set to their lowest position. The impact turned out to be too high on both rifles, about 7 to 8 inches above point of aim at 50 yards. The front sights would have to be raised (turned) to get a low-enough hit for most shooters, and you may need a special tool for that task. These tools used to be common at gun shows, and your local gunsmith may have one.

We fired the rifles with two types of ammunition, one of which was military-like Russian ammunition, but having a hollow point. The other was a soft-nose version manufactured in China. At the range, we found the Albanian rifle to be perfectly reliable. Despite the good trigger, accuracy was about average, the best group being 1.5 inches at 50 yards, and the worst about 4 inches. There were no problems with the rifle whatsoever.

Yugoslavian SKS, about $200
This one too was full of grease, and we got enough of it out to evaluate the rifle thoroughly. The wood was essentially free of big blemishes, and the bluing was nearly new throughout. The barrel was, like the other one here, in fine condition. Neither rifle appeared to have a chromed bore, in spite of our looking with a magnifying glass. All the metalwork was well done, and had a good polish job before bluing. All the parts of this rifle were well made and didn’t appear to have been done at war-emergency speed. This Yugoslav version had even fewer signs of having been used than the Albanian rifle. But there were some obvious differences.

Up front on the Yugo version, we found a grenade launcher pinned to the barrel. Behind the front sight was a clever, folding, grenade-launching sight with three graduations. A spring-loaded button released the sight ladder. The grenade sight swung forward against the normal front sight, and was locked into position by two opposing pins at its base. Releasing those pins required standing the rifle on its butt, pressing inward on both pins with a couple of cartridge noses, and simultaneously pressing downward with your chin against the sight.

The stock, made of stout-looking quarter-sawn hardwood (European walnut?) had a hard, half-inch-thick rubber butt pad, with a hole to access the (empty) butt trap. The strong stock and softer-than-steel butt pad were apparently put there with an eye to accommodating the stresses of grenade launching. Within the shipping box was a moldy leather sling, which appeared to be serviceable. At the very least, it looked (and smelled) authentic.

In spite of the presence of the grenade launcher, this SKS retained a knife-style bayonet that was fitted nicely into the mortised stock forend. The blade was matte-chrome-plated. The wood fore-stock and upper hand guard were shorter than those of the Albanian SKS, leaving more of the main gas tube exposed. This stock had significantly fewer nicks and dents than the Albanian rifle, and we noted the magazine had a different profile. Our specific Albanian SKS, with its deeper magazine, actually held 11 rounds in its mag. This Yugoslav version held the usual 10 rounds. This SKS had a long, creepy trigger pull that was not as bad as it sounds.

The metalwork was not quite as well polished as the Albanian’s steel, but was not at all bad. The bluing was not quite as deep and black either, but more than adequate. The various parts of this rifle had identification numbers, some of which appeared to be vibro-etched. Not all the numbers were the same, but all parts appeared to be of the same vintage, and all fit quite well.

At the range, this proved to be slightly the better-shooting of the two SKS’s of this test. Our best average groups were 2.2 inches, fired with the soft-nose ammo. There were no surprises, and no problems with this rifle whatsoever.

Gun Tests Recommends
Albanian SKS, about $250. Buy It. If we wanted a good rifle that could handle the 7.62 x 39 ammunition, still available for relatively low cost in most areas, we’d be happy with this well-made version of the SKS. The cost is low enough to make these simple rifles shooting bargains, and there’s lots of fun to be had with one of them. You may be able to select from good or better grades of rifles, but expect to pay a premium for the better-looking versions. We liked this SKS, and with the seemingly endless stream of the Chinese versions essentially snapped up, expect to pay about in the neighborhood of $200 to $250 for a decent SKS today. This one was more than decent.

Yugoslavian SKS, about $200, Our Pick.We felt the grenade-launched version to be a great find for the advanced collector, and that might make this one slightly more desirable than the other SKS, though the shooting qualities were close to equal. This particular sample of the Yugoslav rifle shot a bit better than our particular Albanian sample. The price of this Yugoslavian-made version may vary from a low of about $150 for average-quality samples, up to about $225 for better-looking versions with a few accessories.

A good specimen of the Yugoslavian SKS would probably cost a little less than a comparable Albanian version, and therefore we thought it was a bit better deal.