At was Colonel Townsend Whelen who famously said, “Only accurate rifles are interesting.” We recently tested four examples of today’s crop of 22 LR bolt-action rifles to see if any could achieve “interesting” status, and we were gratified at what we found.

Choosing samples from the less-than-stratospheric part of the market, we wanted to know if these somewhat more moderately-priced rifles were sufficient for certain accuracy applications. Our first test piece was the Ruger Precision Rimfire 8401, $480. The next entry was the B14R from Bergara, $950. Third was the Tikka T1X, $519, and last was the Christensen Arms Ranger 22, $830.

Still mired in the great ammo panic/hoard/drought, we used our standard source to locate match 22 LR ammo. AmmoSeek.com is an aggregator that does a very good job of finding and listing ammo that is currently available for sale. Sticking with 40-grain standard-velocity rounds throughout these tests, we selected SK Match, Eley Tenex, and Eley Match. All testing was done at American Shooting Centers in Houston. We fired multiple five-shot groups at 50 yards. All rifles were well-sandbagged in a Caldwell TackDriver Pro (Brownells.com 100-027-023, $49), further supported by a large rear bag, heavy from Tab Gear (TabGear.com, $34). Velocities were measured by LabRadar (MyLabRadar.com, $559).

For optics, we used one of the outstanding Bushnell Elite Tactical XRS3 scopes with the G4P Precision Reticle (Model: ETXRS3G4, $1700). These are very popular on the PRS circuit right now, and we can see why. The Elite Tactical XRS3 is a 6-36×56 variable. The 6-36 power range may be a bit much for PRS, but it works well for F-Class, and the shooter always has the option to dial down the magnification. The G4P reticle provides a variety of subtensions, especially on the horizontal crosshair, which, in turn, makes holding off for wind calls simple and precise. We found the glass to be clear and the adjustments to be consistent. Competitive shooters might easily spend $4000+ on good scopes, but not everyone can. Not everyone has to. There is even a Production division in PRS where they try to limit the initial investment a shooter has to make to get started in the sport. The $1700 price tag for the Bushnell fits well within the price parameters (maximum $4500 for rifle and optic) for Production division without handicapping the shooter. Do yourself a favor and check this scope out. Now to the rifles.

Ruger introduced the centerfire Precision Rifle in mid-2015, thereby starting a revolution. The rifle turned out to be pretty accurate (0.75-moa groups were common for us). The rifles were affordable at less than $1500 and well designed for the long-range competition game, especially for newer shooters. Once strictly the purview of hand-built expensive match rifles, the Precision Rifle Series was soon welcoming a new crowd of shooters who could try the game for a substantially lower ante. Now, some years later, one will still find many Ruger Precision Rifles on the firing line at PRS matches. That being said, PRS matches can still price themselves out of many budgets.

Enter similarly structured events for firearms chambered in 22 LR. Targets are smaller, distances are shorter, and the ability to judge wind is of utmost importance, but gear can be a good bit less expensive. Ruger had done a great job with a major-caliber match rifle. Why not a 22 LR version? The Ruger Precision Rimfire is a scaled-down version of the Precision Rifle with a few additional differences. The Rimfire is about 8 inches shorter and 4 pounds lighter than its older brother, making it very handy to move in and out of the barricades so common to PRS. We measured muzzle diameter at about 0.86 inch, making it wider at the end than the Precision Rifle (henceforth known as the RPR). The barrels on the larger-caliber versions have a definite taper to them, making them heavier overall. Still, the Rimfire puts some good weight out front. This helps the Ruger Rimfire balance right in front of the magazine so the competitive shooter can rest it on a barricade or some other prop. This cold hammer-forged barrel can easily be replaced by a competent gunsmith using AR-15 style wrenches and gauges. The muzzle is threaded 1⁄2×28, ready for any compensator or can you want on it.

The action and the fore end are black hard-coat anodized aluminum. The octagonal-shaped fore end has flats at the 3, 6, 9, and 12 o’clock positions and sports cuts for M-Lok attachments. The action carries a 30-moa Picatinny rail to help scopes dial in for shots longer than normally taken with a 22 LR. Four mounting screws and very little recoil should keep the rail solidly attached.

The Ruger bolt provided a couple of features we really liked. First, for those who are going to run their rifle in competition, the bolt handle is oversized compared to what we would normally expect from a 22 LR. The attached handle is actually the same size as the RPR, making the Precision Rimfire feel a bit more like the full-sized version for practice’s sake. The Ruger Rimfire bolt also gives the shooter the option of a rimfire-length bolt throw (about 1.5 inches) or a full-length bolt throw (about 3 inches) via the simple removal of a clip on the bolt. This is just one more thing Ruger does to help the diminutive 22 feel like a larger practice rifle. The bolt utilizes a single extractor hook to remove the empties from the chamber. Tension on the extractor is aided by a metal wedge opposite the extractor. The ejector is a hook-shaped piece that mounts directly to the chassis. Bolt removal simply requires depressing the bolt release, which is located at the left rear of the receiver. The thumb safety ships installed on the left side of the chassis, but it is easily shifted to the right side if the shooter prefers.

The chassis is made from glass-filled nylon. It is adjustable for cheek height as well as length of pull via loosening of a single locking cam (in contrast to two cams on the RPR). Tension on the lock is adjustable. The buttstock features a small section of Picatinny rails for those who desire a monopod. It also has an open “hook” for those who prefer to use a rear bag. The pistol grip is a standard AR and allows about any aftermarket piece the shooter would want. The trigger uses the standard Ruger blade safety and is adjustable from just over 2 to about 5 pounds. The rifle supposedly ships with the trigger set to the lightest weight. Ours confirmed that with a pull measuring 2.3 pounds with just over 2 ounces of standard deviation. The Ruger Precision Rimfire allows the use of any good Ruger 10-22 magazine. The Precision Rimfire came with a single 15-round BX-15 magazine. A barricade stop is molded into the chassis just in front of the magazine, allowing the shooter to push into props with the rifle without much chance of causing a malfunction. 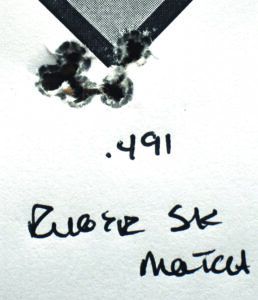 Our Team Said: We had a few failures to feed in the very beginning. It appeared that rounds were exiting the feed lips slightly nose up, causing the lead nose of the cartridge to catch on the edge of the chamber. Accuracy was fair, with the Ruger showing the largest average group size of the four rifles tested. Five-shot groups averaged 0.669 inch. The other three test rifles averaged groups in the mid 0.4’s. Surprisingly, the Eley Tenex ammo performed poorly in the Ruger. We could feel the Ruger Marksman Adjustable Trigger, with the embedded blade safety, flex a bit under compression. Not our favorite, but trigger compression was very consistent, so it was also very manageable.

We tested at American Shooting Centers in Houston. We used a LabRadar chronograph (MyLabradar.com, $559) to determine muzzle velocities. We fired all shots for group from a Caldwell TackDriver bag ($49 from Brownells.com) and a Tab Gear large rear bag, heavy ($34 at TabGear.com).