Roland Special has become known as any semi-automatic pistol that has been highly customized by its owner. We are not just talking about dropping in an aftermarket trigger or swapping out sights. A Roland Special build is a reflection of the owner’s needs and personality with aftermarket slides, barrels, triggers, firing pins, optics, magazine wells, custom grip stippling, slide stops, magazine releases, and a whole lot more. There really is no limitation on the amount of customization and aftermarket parts, other than the owner’s bankroll and how much they are willing to spend on a self-customized pistol.

The idea of the Roland Special started as a joke by putting a compensator on a concealed-carry Glock G19 equipped with a SureFire X300U tactical light. The idea to comp a G19 came from a member on the PrimaryandSecondary.com forum back in 2015, and that mod morphed into the Roland Special. Today, the Roland Special has spawned a following of kitchen-table gunsmiths creating customized and personalized Glocks, as well as S&W M&Ps, FN 509s, H&Ks, CZs, and others. Just go to Instagram or Pinterest and search “roland special” to see a massive amount of custom pistols, with some going more for the cool factor rather than performance and usability, in our opinion.

For this match up, we built a traditional Roland Special almost exactly like the original Glock G19 circa 2015, but like kitchen-table gunsmiths before us, we tweaked the build. We also slightly modified a Stoeger SRT-9 Combat with an optic and compensator. Our third pistol is the Springfield Armory Hellcat RDP, which is a factory-made Roland Special version of Springfield’s Hellcat. All of these pistols use a striker-fire system and DAO trigger with a flat face, along with a polymer frame. Other similarities between these pistols is a slide-mounted red-dot optic — green dot in the case of the Stoeger — and a compensator. We chose these three levels of Rolandism to illustrate how Gun Tests readers can adjust their sights on their own handguns to modify them as little, or as much, as they want, according to their needs and their wallets.

The idea behind a compensated pistol is to reduce muzzle flip. We fired all three pistols with and without their compensators and found there is a reduction in flip when using a compensator. The ports in the compensator and the extra weight help to stifle muzzle rise. The benefit of a red/green dot optic is more precise aiming and faster target acquisition. With a red-dot sight, all you need to do is place the dot on the target to aim, there is no front sight/rear sight alignment required.

We first tested for accuracy at 15 yards, where both the Hellcat and G19 gave us one ragged hole depending on the ammo we used and our concentration. We also tested at 15 yards for speed and reloads. The compact Glock and full-size Stoeger were easiest to manipulate. The subcompact Hellcat RDP was smaller, and we had to modify our reloading technique to ensure the magazine was fully seated and we didn’t pinch our fingers.

Our 9mm Luger ammunition consisted of three loads, two training loads with full-metal-jacket ammo and one defense load with hollow points. Remington Golden Saber Bonded, the defense load, uses a 147-grain BJHP bullet. For training ammo, we used an Armscor brand with a 124-grain FMJ and Defender remanufactured ammo with a 115-grain FMJ.

Because you, the shooter, have customized the pistol, you make it yours by adapting the gun to your shooting style. The thing with a Roland Special is you can easily swap out parts if you don’t like how they perform. One thing to remember when doing a custom build, not all parts may work perfectly together, meaning you may initially experience some failures to feed or eject until parts have broken in. This happened with our G19 build, but we were able to quickly work the bugs out and get it to run consistently. Here’s what else we found with these custom and factory builds.

The MSRP of a base-model STR-9 pistol (31720) has recently been $329. The STR-9S Combat’s MSRP is $599. That additional $270 allows the Combat to come off the assembly line with a lot of the bells and whistles already installed — a partial Roland Special. To make our Roland, we added another $171 in optics and comp, which we detail below.

The Combat slide has aggressive front and rear serrations, is cut for a red-dot optic, and has tall sights. The grip butt has a gaping magwell that swallows 20-round magazines nearly whole. And the barrel is threaded, waiting for the user to add a muzzle device. In the box were three metal magazines. The amount of magazines was just right.

The full-size STR-9S is similar in size to a Glock G17. The guts of the pistol look very similar to a Glock, but the parts are not compatible. It also field-stripped like a Glock, and the slide release looked like it came from Georgia or Austria. Like the other pistols tested, the Stoeger has a flat trigger with a safety lever built into the face, a la Glock. We liked the trigger and thought a 4.8-pound pull weight was decent. We liked the grip of the STR-9S. The front grip strap had slight finger grooves and a stippled-like texture. The rear grip strap has coarse checkering that is comfortable in recoil. Three rear grips modules sized small, medium, and large are included with the gun, so it was easy to adjust the grip to a shooter’s hand size. There is also a nice undercut behind the trigger guard so your grip is closer to the center axis of the barrel’s bore.

The slide’s coarse serrations make doing a press check safe and easy. The slide profile is less blocky looking than a Glock. The extractor gives you a hint that a round or case is in the chamber. On the top side of the slide is a cut for one of the four mounting plates for a red dot. We used the one compatible with the UTG green dot, which also fits Vortex Venom/Viper optics, and found the sight easy to install. Screw down the plate, them screw down the optic to the plate. Simple. The sights on the pistol are tall, so they co-witness with the optic. In our opinion this is best practice when using a red dot. The front sight features a green fiber-optic pipe that shows up well when aiming. The rear sight is fully adjustable with a screwdriver. Two smaller green dots are placed on either side of the notch. We would have preferred different-color dots in the rear sight. The rear sight also extends past the rear of the slide to provide maximum sight radius.

We added a UTG Reflex Micro Dot Green SCP-RDM20G sight with a 4-moa single green dot. It features an MOS adaptive base and base for mounting on a Picatinny rail to use it as an AR optic. We’ve learned that this sight has been replaced with the new OP-RDM20G model ($111; Amazon.com). The UTG has a button on the left side that turns the sight on, adjusts brightness of the dot, or turns the dot off. Elevation and windage directions are clearly marked with an arrow, and you can adjust them using the rim of a 9mm round. It’s powered by a CR2032 battery, and like the Trijicon, you need to remove the sight from the mount to change the battery.

We added a Griffin Armament Micro Carry Comp 1⁄2×28 Model GAMCC1228 ($60; OpticsPlanet.com). This is the opposite of the KKM Precision and Springfield comps. The Griffin is low profile and ideal for EDC. In fact, you may not need to change your holster using the Griffin. It features three ports and is not much larger than a thread protector. We found it helps with slide pulse and muzzle flip, but the larger and heavier comps did a better job, of course.

Going hot, we had high hopes for the Stoeger. The 20-round magazines are stainless and easy to load and provide heft to the pistol. The floor plate is made of metal and drop out of the grip like a sack of grain when you press the magazine release. We liked the feel the heft, and then reality set in. The STR-9S began to jam with the hotter Defender ammo. We knew we weren’t limp-wristing the shots, yet it still jammed with failures to eject. We broke it down and oiled it, then tried the Remington and Armscor ammo. More jams. When we did get the pistol to run, we found its accuracy was good. Our best group of five shots measured 1.07 inches. With all ammos, the average group size ranged from 1.21 inches (Defender) to 2.35 inches (Remington). We did experience flares with the UTG optic, which makes the dot look blurry, like a starburst or smear.

In fast shooting, we thought the added comp worked, but it was not as effective as the larger comps on the Glock and Springfield. Trigger reset was long, about a 1⁄4 of an inch. Recoil pulse was easy to control, yet we had these pesky jams that broke our rhythm and our confidence in the pistol.

Our Team Said: For the price, the STR-9S Combat offers a whole lot of value. Because the performance was sub-par, we graded it accordingly. We did like the grip and slide set up, and we loved the magazines. If only the gun had performed to our expectations.

To collect accuracy data, we fired five-shot groups from a bench using a rest and open sights. We recorded velocities using a ProChrono digital chronograph set 15 feet from the muzzle. 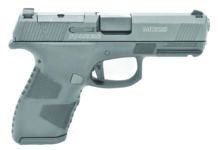