Sturm, Ruger & Company, Inc. announced the initial production and shipment of Ruger-made Marlin lever-action rifles just over a year after acquiring the assets associated with the Marlin brand. The first Ruger Marlin model is the 1895 SBL lever gun chambered in 45-70 Gov’t. Suggested retail is $1399.

“We are excited to officially flip the switch and let our customers know that Marlin is back,” said Ruger President and CEO Chris Killoy. “Since the move of more than 100 truckloads of equipment and inventory back in November 2020, our engineering team took the 1895 through a complete design and production review. The result is a quality rifle, produced using modern manufacturing methods. Being a long-time Marlin fan, I knew that we needed to take our time. From the quality of the firearm, to clear ways for consumers to differentiate Ruger-made Marlins, we focused on getting every detail right.”

Ruger-made Marlin 1895 SBL rifles are marked with “Mayodan, NC,” bear an “RM” or Ruger-Made serial number prefix, have the Marlin Horse and Rider logo laser engraved on their grip, and also feature a red-and-white “bullseye” on the buttstock.

The 1895 SBL lever gun chambered in 45-70 Gov’t. is Model 70478, with a 6+1 capacity. The stock is gray laminate, with the barrel and receiver being polished stainless steel. Sights are a high-visibility tritium fiber optic front and an adjustable ghost ring rear.

Additional models are scheduled for release throughout the coming year; specifically, other variations of the Model 1895, as well as the reintroduction of the Model 336 and Model 1894.

FN America has introduced an all-new FN High Power, a completely reimagined pistol based on the legendary 1935 design conceived by John Moses Browning and perfected by Dieudonné Saive. Prices start at $1269 for the black Model 66-100256.

“We recognized the gravity of reintroducing this newly redesigned pistol with such a storied history,” said Mark Cherpes, president and CEO for FN America, LLC. “Rather than introduce a clone of the original, we had to deliver much more than other brands, knowing the FN High Power would be held to a higher standard.”

“FN conducted a thorough historical design study into the classic High Power design to identify what truly makes High Power what it is,” said John Ryan, director of product management for FN America. Ten specific core elements were selected as areas of priority, with the signature elements of the keyhole muzzle, long arm slide release, and taper of the dust cover being the underpinnings of the classic design.

The new FN gun features improvements in ergonomics and fire control design, accuracy, and increased magazine capacity. With improved internals and a modern barrel lockup, the new FN High Power design is capable of cycling most 9mm loads, something that the original design may lack. Also, FN increased capacity to 17+1 rounds, added ambidextrous controls, and eliminated the magazine disconnect. Other improvements include better ergonomics, new grip and frame texturing, and extending the beavertail to address Hi-Power hammer and slide bite.

Also, FN engineers resolved the complex take-down method of the original design and updated it to current standards; disassembly is as simple as rotating the take-down lever to field-strip the pistol. The 9mm Luger-chambered FNHP includes a single-action hammer-fired trigger with a 5-pound let-off. The gun weighs 40 ounces and has a barrel length of 4.7 inches (1:10 RH twist) and an overall length of 8 inches. Height is 5.62 inches and width is 1.35 inches. The steel blackout sights are driftable in the FN 509 pattern dovetail. Finish options include black, stainless steel, and flat dark earth. The guns ship with two steel 17-round magazines.

Henry Repeating Arms has introduced two new models to its line of American-made firearms with the Long Ranger Express and the Brass Axe .410 Bore.

The new Henry Long Ranger Express, chambered in 223 Rem./5.56 NATO, is a carbine with a feature set aimed at property defense, predator hunting, and varmint control. The black anodized aerospace-grade aluminum receiver is factory mounted with a Picatinny rail for use with optics and accepts a five-round steel-bodied detachable magazine. The 16.5-inch blued-steel sporter barrel is threaded for use with a suppressor or other muzzle device and keeps the overall length down for maneuverability. The weather-resistant laminate furniture features sling swivel studs and a solid rubber recoil pad. The manufacturer’s suggested retail price is $1235.

First introduced in 2019, Henry’s Axe .410 is a lever-action firearm featuring a five-round capacity of 2.5-inch .410 shells, a side loading gate, and an “axe handle” grip. The new Brass Axe .410 features a polished hardened brass receiver and fore end cap, American walnut furniture, and a blued-steel 15.14-inch barrel, bringing the overall length to 26.4 inches. The barrel is threaded for Invector-style choke tubes with a Full choke included. The Brass Axe .410 is not regulated under the National Firearms Act and does not require a tax stamp to purchase, but other state or local classifications may restrict ownership. The manufacturer’s suggested retail price is $1132.

Savage Arms is adding a new handgun and two new rifle designs to the growing list of guns slated for launch in 2022. 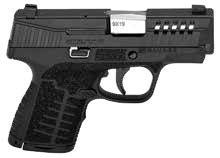 The new EDC handgun is called the Stance, a micro-compact 9mm that marks Savage’s return to the concealed-carry and self-defense handgun markets.

“Since Savage was sold in July 2019, President and CEO Al Kasper publicly stated that Savage Arms would be a complete firearm company,” said Robert Gates, vice president of sales and marketing at Savage Arms. “Savage has taken the first step into what is the largest segment of the firearms market with the introduction of Stance.”

Jessica Treglia, Sr. brand manager at Savage Arms added, “While this isn’t Savage’s first concealed-carry pistol, and certainly not our first handgun, it has been more than a century since we focused on compact pistols for every day carry. Stance is the first in a new series of handguns that will meet the accuracy and reliability standards that our customers expect.”

Stance utilizes a chassis as the serialized component of the pistol, which allows the shooter to own a variety of grip frames without additional firearms registrations. The frames feature aggressive stippling that wraps 360 degrees. Stance comes with two interchangeable back straps for small- or large-sized grips, both at the popular 18-degree angle.

Other features include an ambidextrous magazine release and slide catch, a stainless-steel slide with Melonite finish for corrosion resistance, and a beveled slide front for easy holstering. The relieved slide also has wide grip serrations for better grip with a 3.2-inch stainless-steel barrel underneath. The trigger has a short reset and wide, well-rounded face. The Stance is easy to take down with a take-down lever, so there’s no trigger pull or tool needed for disassembly. The standard black Stance 67001 comes with two magazines with seven-, eight-, or ten-round capacities and has a $479 MSRP. Night-sight equipped models such as the Model 67003 start at $548, and laser models, such as the Model 67017, run $561 MSRP. Finishes include black, FDE, and gray models.

“The Elite Precision has changed the way Savage shooters think about long-range capability,” said Jessica Treglia, senior brand manager for Savage Arms. “The addition of the Impulse straight-pull action is going to add a new element of speed to an already efficient rifle. When split times are an important aspect of the competition, Impulse Elite Precision will be a game-changer.”

The new rifle features a 1.5- to 4-pound user-adjustable AccuTrigger underneath the MDT one-piece aluminum ACC chassis with adjustable length-of-pull and comb height. The chassis fore end includes an ARCA rail with M-LOK slots, and the stock and action accept AICS magazines and have an ambidextrous magazine release. The barrel is a precision button-rifled stainless-steel modified Palma-contour tube with a 5⁄8-24 UNEF threaded muzzle. The matte-black aluminum receiver comes with an integral 20-MOA rail, and the bolt handle is an ambidextrous multi-positional piece. Rifles start at $2649 MSRP for the 308 Win. (57887), 6.5 Creedmoor (57888), 6mm Creedmoor (57889), and 6.5 PRC (57890) chamberings.

Savage has not ignored the rimfire shooter in 2022, with the introduction of the new Model 64 Precision rifle, which houses a semi-automatic action in a synthetic MDT chassis with M-LOK slots and an ergonomic pistol grip. The heavy barrel and threaded muzzle provide increased functionality and extend the range of the rifle.

“The Model 64 has been a tremendous gun for Savage,” said brand manager Treglia. “It deserves a big upgrade — and this is it. We’ve taken our benchmark plinker and added features that will allow shooters to connect at extended distances.”

Features include a 16.5-inch matte-black carbon-steel heavy barrel and receiver, with a threaded muzzle of 1/2-28 pitch. The drilled and tapped receiver comes with a one-piece 20-MOA Picatinny rail. The high-strength glass-filled nylon unibody chassis is available in black or FDE colors, and it’s fitted with an AR-compatible grip interface and an integral barricade stop. Detachable magazines come in 10- or 20-round counts. Rifles are priced at $299 MSRP.