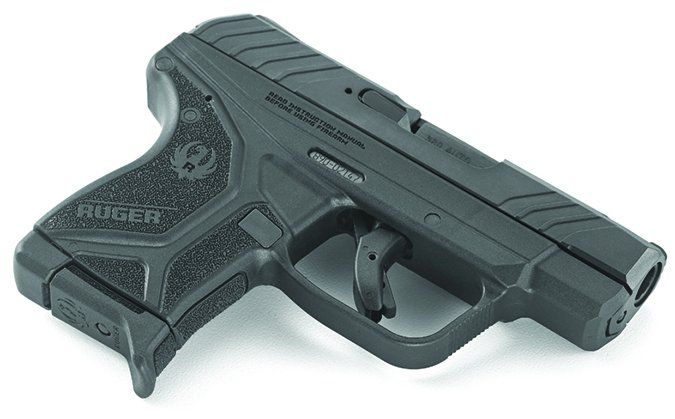 Sturm, Ruger & Company, Inc. has introduced the new Ruger LCP II, a new variant of the pistol that debuted in 2008, in early October 2016. The 380 Auto LCP II pistol features improved sights for superior visibility, a larger grip surface for better distribution of recoil forces, and an easy-to-rack slide with an improved slide-stop mechanism and a last-round hold-open. A short, crisp, single-action trigger has an inner-trigger safety.

“With modern styling, improved features and a modest price, the LCP II promises to raise the bar on what people have come to expect in a compact 380 Auto pistol,” said Ruger President and COO Chris Killoy. “The LCP II is another fine example of Ruger’s product innovation and dedication to continuous improvement of a popular product line.”

The compact pistols measures 5.17 inches long and 3.71 inches tall) and comes with a pocket holster, though it will fit a variety of holsters and concealed carry options. Weighing in at 10.6 ounces and equipped to hold 6+1 rounds of 380 Auto ammunition, the LCP II could be an ideal back-up gun that’s compact and light enough that you never have to leave it at home.

The American-made LCP II is built on a one-piece precision-machined anodized-aluminum chassis with integral frame rails and fire-control housing. Additional features include a through-hardened alloy steel slide; a black, one-piece glass-filled nylon grip frame; a textured grip frame to provide a secure and comfortable grip; a finger grip extension floorplate that can be added to the magazine for comfort and more secure grip, and a blued, alloy steel barrel. The LCP II ships with one 6-round magazine.

While the heavily redesigned Mark IV maintains the same classic outward appearance as the Mark III, it incorporates a significant improvement customers will love — a simple, one-button takedown for quick and easy field-stripping. A recessed button in the back of the frame allows the upper receiver to tilt up and off the grip frame without the use of tools. The bolt simply slides out of the receiver and the barrel can be properly cleaned from chamber to muzzle.

“We are thrilled to be introducing what we consider to be a monumental improvement to this iconic pistol that has been with Ruger from the start,” said Ruger President and COO Chris Killoy. “This one-button takedown alleviates the headache that our Mark III owners are all too familiar with and we anticipate the Mark IV pistols being some of the cleanest rimfires at the range.”

Other significant improvements include a one-piece grip frame that is CNC-machined from a solid piece of stainless steel or aluminum; an ambidextrous manual safety, and a redesigned bolt stop for more ergonomic operation. The magazine drops free on release for faster reloads, and a redesigned magazine disconnect safety prevents discharge when the magazine has been removed. Internal improvements include changes to the hammer, sear, bolt and firing pin for smoother, more reliable feeding.

The American-made Mark IV pistol ships with two 10-round magazines.

The Ruger American Pistol line now has a Compact model chambered in 9mm Luger. The new handgun is available in both Manual Safety and Pro model configurations.

Ruger polled law enforcement and military trainers throughout the country to select the form, function and features of the Ruger American Pistol. The resultant pistol combines a recoil-reducing barrel cam (which better spreads recoil over time) with a low-mass slide, low center of gravity and a low-bore axis to provide better balance, less felt recoil and less muzzle flip.

The Ruger American Pistol also features a pre-tensioned striker system, which allows for a short takeup trigger with positive reset, and a modular wrap-around grip system that adjusts palm swell and trigger reach to fit a wide range of hand sizes.

With a 3.55-inch barrel, overall dimensions of 6.65 inches long, 4.48 inches high and a weight of 28.75 ounces with an empty magazine, the Ruger American Pistol Compact model shares all of the features of the duty-size gun in a smaller, lighter, more concealable package. It ships in a hard case with small, medium and large replaceable grip modules and two nickel-Teflon plated steel magazines (one 17-round extended magazine and one 12-round compact magazine).

The lightweight aluminum frame, shorter barrel and commander-length slide combine with the 9mm chambering to create a lighter concealed-carry package.

The new Ruger SR1911 Lightweight Commander-Style 9mm Luger model features a 4.25-inch barrel, improved cocking serrations on the slide, a ramped barrel, and a 29.3-ounce weight with an empty magazine. This pistol ships with two 9-round magazines, a bushing wrench and a cable locking device.

Ruger’s new Hawkeye FTW Hunter was designed by working closely with the instructors of the Sportsman’s All-Weather, All-Terrain Marksmanship (SAAM) school at the highly regarded FTW Ranch in Barksdale, Texas.

The Hawkeye FTW Hunter features a Natural Gear Camo, laminated wood stock, and a stainless steel, cold hammer-forged barrel. The hinged, solid-steel floorplate is engraved with the FTW Logo and allows for easy unloading of the rifle without the need to chamber each cartridge. The new rifle will be offered in seven calibers, including three left-handed options.

Each rifle comes with the Ruger Muzzle Brake System, which includes a removable, radial-port muzzle brake that significantly reduces felt recoil. For times when the brake is not preferred, it may be replaced by the included dynamically-matched muzzle weight. Switching between the brake and the weight will not change the bullet’s point of impact for a particular load. The included thread protector may be used if neither the brake nor the weight is desired.

The Hawkeye FTW Hunter also includes the LC6 trigger, which offers smooth, crisp performance right out of the box and increased accuracy on the range or in the field; a non-rotating, Mauser-type controlled round feed extractor, a three-position safety for easy activation that allows the shooter to lock the bolt or load and unload the rifle with the safety engaged; and an adjustable length of pull spacers and patented integral Ruger scope mount cuts into the receiver.

Something a Little Different from Cimarron

Cimarron Firearms, located on lovely Winding Oak Road in Fredericksburg, Texas, is offering some deals on three of its more unusual Cowboy-style firearms.

The Bisley Model 357 Magnum (No. CA604) is a 7.5-inch revolver that got its name after improvements were made to Colt’s first target revolver (the 1888 Flattop). The resulting “Special Target” model of 1896, later renamed the “Bisley” because of its spectacular performances at England’s Bisley Common shooting range, varies from the classic 1873 Peacemaker by its enlarged trigger guard and radically curved grip, allowing the shooter to easily maintain the same hand position from shot to shot. Other noticeable differences include a 0.1875-inch longer frame and a low, wide hammer spur for re-cocking the gun with minimal disturbance to the position of the shooter’s hand. This creates a flatter arc and reduces travel. Internally, a new mainspring with a stirrup-type of swiveling T-bar attachment to the hammer requires less pressure in cocking.

The Bisley was much more than a sport shooter’s handgun, however. For the next two decades, this rakish-looking single action was used by cowboys and adventurers of all breeds. It especially became a favorite in the American southwest and in northern Mexico, in particular with Mexican Revolutionary Gen. Pancho Villa. It was also used by Canadian train robber Bill Miner, as seen in the 1982 Western The Grey Fox. The Cimarron Bisley is offered in Standard Blue finish in 4.75-inch, 5.5-inch, and 7.5-inch barrels, in either 38 Special/357 Magnum, 44 Special, 44-40, or 45 Colt. Dealer cost is set at $473.

Cimarron introduces Pietta’s affordable and obtainable deep-laser-engraved revolvers with the debut of the Frontier 4.75-inch-barrel Old Silver Frame PW Laser Eng. Poly Ivory Grip (PP410LSFI). At an affordable price point of $529 dealer, these come in nickel and old silver frame (OSF) finishes, the latter a two-tone finish where the barrel, cylinder, and grip assembly are blued and the frame is in the white — a polished steel finish.

The 1866 Carbine w/Brass Tacks (Indian Carbine) 45 Colt was originally known as the “Improved Henry,” due to its patented loading gate on the side of the frame, designed by Nelson King, Winchester’s plant superintendent, and the addition of a wood forearm.

The 1866 model was known as the “Yellow Boy” by the Native Americans, because of its brass frame. The ‘66 model was the first true cowboy lever-action and the first that adapted well to carrying in a saddle scabbard, due to its slab sided design.

With more than 170,000 made between 1866-1898 — its popularity continued long after more powerful lever guns were introduced, the ‘66 model was famous worldwide. The guns were used by the forces of Benito Juarez in Mexico, the Turkish army in their fight against the Russians, and in the Wild West by such notables as Sioux Medicine Man Sitting Bull, the Union Pacific’s chief engineer General Grenville Dodge, and desperado Bill Doolin.