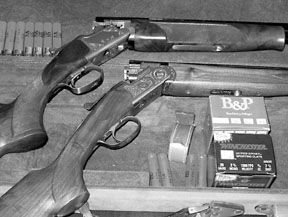 Particularly among the hunting crowd, who like to pit their wingshooting skills against those gray ghosts of fall — darting and diving aerobatic mourning doves and their white-winged cousins — more and more 28s are replacing their larger 20- and 12-gauge cousins. There is still a time and a place for big guns, but a growing number of hunters and clay target shooters are finding out that a smaller gauge can mean more shooting with less punishment.

One veteran outdoor observer, Foard Houston of the Sandy Oaks Ranch Hunting Lodge and Resort near Devine, Texas, is an unwavering 28-gauge convert. After putting hundreds of hunters each year on thousands of dove and quail, he has yet to find a shotgunner returning to a 12-gauge thunder boomer after trying out a 28.

With less weight and less recoil to their credit, the 28-gauge shotguns can get the job done while being a pleasure to handle. Putting the question in highway lingo: “Why drive a massive tractor-trailer rig when you can get from here to there behind the wheel of a sleek sports car?”

Seasoned outdoor enthusiasts point out that the 28s are also a good idea for both youngsters and women, who can be recoil sensitive, and provide nearly identical knock-down power as a 12 on most birds and targets. The tiny scatterguns might even keep shooters from becoming sky blasters, throwing shot at targets well out of range.

To check out their popularity, we put a pair of quality 28-gauge over and unders in the hands of our shotgun test crew. The two shotguns were the Browning Citori XS Sporting, made in Japan and imported by Browning Arms Company, and the Beretta 686 Silver Pigeon, manufactured in Italy and imported by Beretta USA. Both are available in the price range of about $2,000 for those looking to upgrade their scattergun collection.

The Browning Citori XS Sporting is one of the latest creations in a long line of firearms of the firm founded by legendary inventor John M. Browning. Manufactured by Miroku in Japan, the shotgun is imported to the United States by Browning Arms Company, (800) 333-3504 or www.browning.com.

Even at first glance this 28 radiates an image of a solid, attractive addition to the collection of any wingshooter looking to spend $2,000 for a new toy. The 28 is built on a 20-gauge frame, giving the shotgun a surprisingly hefty balance and smoothness with its 30-inch barrels.

Also displaying the quality of a fine firearm worthy of the extensive product line manufactured in Italy and imported by Beretta USA, the Model 686 Silver Pigeon is a classic small-gauge shotgun. Available for about $2,000, the 26-inch barrel and sleek lines of this older-model 28 gauge shotgun offers a feel of class from the first time it hits your shoulder.

A trip to a sporting-clays course helped us examine the handling and target-breaking capabilities of the two shotguns. The course featured a variety of clay targets, with quite a few small specialty targets, minis and midis, tossed in among standard-size targets to really test the clay-busting ability of the tiny 28s.

Shooting side by side with veteran competitors swinging custom 12-gauge shotguns, the field testers were not handicapped on any of the stations despite using small-gauge guns.

Ammunition used in the tests included the new Winchester AA HS Super Sport Sporting Clays loads in 2.75 inch shells with three-quarters of an ounce of No. 7 1/2 shot. In addition, we tried out the Baschieri & Pellagri (B&P) Extra Rossa 2.75-inch shells, also with 3/4s of an ounce of No. 7 1/2 shot. Both shells have a velocity of about 1,300 fps, although recoil was not a factor with either shotgun. Here’s our report:

At first glance, this 28 is hard to distinguish from its 12-gauge counterpart. The normal qualities of a small-gauge shotgun — lighter, quicker and a shorter length of pull — were missing in this 28 that feels like a 12.

Rather than distract from the overall enjoyment factor, the heavier-than-expected attributes allow a shooter to quickly become accustomed to the Citori 28.

Very pleasant dark wood, crisp lines and precise wood-to-metal fitting immediately stand out on first inspection. The Browning logo and XS letters, in addition to outlines around the engraving of the silver nitride-coated receiver, give the shotgun a classy appearance.

Recoil is not a factor with 28-gauge shotguns, so our testers were surprised at the 0.5-inch-thick solid-rubber recoil pad. However, the smooth sporting clay-style pad, rounded at the top, offered easy mounting into the shoulder.

Our test gun measured 47.5 inches in overall length with a barrel 30.0 inches long and had a pleasant heft for a small-gauge gun. The LOP measured 14.75 inches, even with the adjustable trigger in the most rearward position. In the front trigger position, the LOP measured a very long 15.5 inches, which would accommodate a very big shooter. The ability to adjust the trigger and even swap out the standard trigger with an extra wide or narrow trigger (all gold plated and supplied as part of the package) was a pleasing bonus with this shotgun.

The drop at the comb was 1.4 inches; and drop at the heel was 2.2 inches. Heavy for a 28, the Browning tipped the scales at an even 7 pounds and had a pitch of 2.5 inches. These features, combined with a good, crisp trigger pull for both barrels of 4 pounds, gave our field testers a very pleasant shooting experience.

Like its heavier 12-gauge cousin, the Browning 28 also features a dark walnut forearm and stock finished with a satin lacquer coating. The sharp, crisp checking on the Schnabel forearm and pleasingly thin pistol grip provide a sure grip for shooters. The non-automatic safety on the tang allows the shooter to select which barrel fires first by moving the safety from side to side. Whichever letter is exposed (U or O) is the barrel that fires first.

One of the interesting features of the shotgun is the HiViz Pro-Comp front sight that almost seems to give off a chartreuse glow. Combined with a small white bead in the middle of the 0.375-inch-thick rib, the shooter’s eye is naturally drawn down the barrel.

This sight system is a big plus for veteran shotgunners who know that having a good focal point in your peripheral vision can help you stay on target. However, beginning shooters may focus too much on the sights and not the target. Unlike rifle and pistol shooting, focusing on shotgun targets rather than the sights is the path to successful wingshooting.

As for the handling and target-breaking capability of the Browning, none of our shooters had any complaints. The hefty weight of the 28 allowed our shooters to glide through targets with ease. and yet the shotgun was very quick on short-range shots.

No one used the excuse that they were under gunned, even when targets escaped unscathed.

The Browning came with three choke tubes — skeet, improved cylinder and modified — and a standard, T-shaped choke tube wrench. The chokes provided target-breaking patterns as they should, although the tube wrench was a little awkward to use. Several after-market choke tube wrenches are available and are suggested for those shooters expecting to change chokes with any regularity.

Mechanically, there were no problems with the Browning. Although the shotgun demonstrated typical stiffness of a new firearm, the locking system featuring solid rear barrel lugs opened and closed with a reassuring snap every time. There were no misfires and no failures to eject spent shells.

Among the most common comments from our test group were mentions about the crispness of the trigger pull (both barrels fired with a pleasurable 4-pound pull) and with the “12-gauge feel” of the 28-gauge shotgun. The 30-inch barrel with ventilated side rib was both smooth and steady on a variety of targets.

With its 26-inch barrels and diminutive profile, this 28 gauge just looks like it should be the firearm of choice for the upper-crust sportsmen or sportswomen spending a morning of fine wingshooting over a brace of English pointers.

“Quick handling” and “easy to bring to the shoulder” were two of the most common observations from our field testers as they hefted the 6-pound scattergun and put it through its shooting paces.

More at home in the field than at a clays course, the Beretta was slightly more whippy than the heavier Browning. However, reaching out and touching targets with the small-gauge shotgun did not seem to be a problem for any of our shooters.

The overall length of the Beretta was 43.75 inches, with a length of pull of 14.4 inches. The drop at the comb of 1.5 inches and drop at the heel of 2.75 inches. Like the Browning, both barrels of the Beretta fired after a crisp trigger pull of 4 pounds. The rib on the barrel was one quarter of an inch wide, providing a fairly narrow sighting ramp, and the front sight was a single silver bead.

Despite its lighter weight, the Silver Pigeon was also a pleasure to shoot, with no appreciable recoil difference between it and the heavier Browning. The solid rubber, three-eighths-inch thick recoil pad is also rounded at the top to allow quick mounting of the gun. The shotgun’s oil finish and hand checkering on the forearm and thin pistol grip allowed for sure control of the firearm and a comfortable feel.

Slightly more pleasing to the eye because of its attractively engraved nickel receiver, trigger guard and cocking lever, the Silver Pigeon won the beauty contest between the two 28s. On the downside, the Beretta features an automatic safety on the tang, meaning each time the shotgun is opened, the safety returns to the safe position. This feature is desired in field shooting conditions, but not on clay target courses where the firearm is only loaded when the competitor is in the shooting position.

Mechanically, the Silver Pigeon worked flawlessly during all of the testing. There were no misfires and all the fired shells ejected as they should.

Both of these shotguns are obviously well made and show the results of many decades of firearm manufacturing experience by both companies.

Browning Citori XS Sporting 28 Gauge, $2,000. Our Pick. This was a very smooth, fun to handle firearm that does its job and is a pleasure to shoot. This shotgun is just the ticket for the scattergun enthusiast looking to move up to a higher-grade firearm. It is also a good choice for a youngster or women as long as the stock is cut down to fit their smaller frames.

Beretta 686 Silver Pigeon 28 Gauge, $2,000. Buy It. The only slightly negative comments about this fine wingshooting piece were concerning its automatic safety (a pain on the clay target course) and 26-inch barrels, which caused the shotgun to be a little more whippy than the longer-barreled Browning. Longer barrels (28 or 30 inch) would give this shotgun a little more heft and help with its performance on the clay target fields.

Savage Milano Is a Best Buy Among 28 Gauge Over/Unders