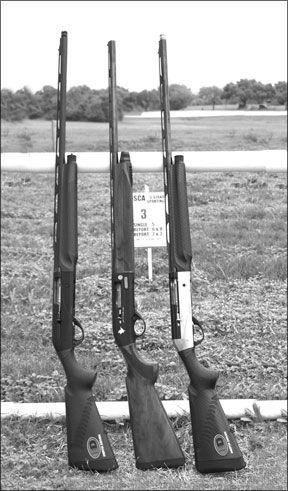 There are two sides to the competitive shooting coin—one side is the challenge of being the best you can be and the other side is just being able to have a little fun. Picking the right shooting tool to handle both sides of this coin has become a lot easier with the availability of a good number of quality, fine-handling 20-gauge semiautomatics. These small gauge shotguns provide the shooter with a lighter, quicker target-busting tool that also carries the freight in the field during bird-hunting sessions.

For our field test, we selected three 20-gauge semiautomatics for a clay-crunching challenge that pitted a trio of Italian-made shotguns in a head to head to head battle. The three shotguns we collected from Dury’s Gun Shop in San Antonio were the Benelli Super Sport, $1,700; the Benelli Cordoba, $1,500; and the Beretta AL 391 Urika, $1,350. All prices reflect Dury’s asking price at the time of our test.

As noted, all of the shotguns are made in Italy and all of them have very similar dimensions, although both the Benelli shotguns featured synthetic stocks and forearms while the Beretta offered the more traditional satin-finished walnut stock and forearm. With all sporting 28-inch ported barrels to help reduce recoil and with little difference in weight and overall length, our test team placed increased emphasis on function and handling ability—and also factoring in the price tags as another ledger entry.

The Beretta produced the best pattern, a 50-50 spread with half of the hits above the center and half below. Patterns were 60-40 (more hits below the center than above the center) with both of the Benelli shotguns. The Super Sport was also patterned slightly to the left. While all the patterns were acceptable for both clays and birds, the Beretta scored the first victory in our testing with its paper punching performance.

Here are the rest of our test results:

The contrast of the brushed stainless receiver and the glistening carbon-fiber stock and forearm are the first features to leap out as the Super Sport comes out of the box. We found the appearance to be quite attractive and different for a competitive shooting tool. While we did not encounter any problems holding the Super Sport, the slick and shiny finish on the stock and forearm was our least favorite.

The slim forearm and slight palm swell on the grip, complete with stamped checkering, provided a solid foundation for moving the Super Sport into targets. We liked the ComforTech system gel recoil pad and comb insert, although there was some concern by a few of our team about the slickness of the pad. A slightly rougher surface on the recoil pad would provide a more solid contact in the shooter’s shoulder.

Concerning recoil, while the system is advertised as being able to reduce felt recoil by as much as 48 percent, we did not experience such a drastic reduction. Recoil was certainly manageable and well within the comfortable limit, but our shooting experience simply did not produce the advertised results. The difference in recoil between the three shotguns with both brands of ammunition was negligible.

The longest of the shotguns in the test, the Super Sport had an overall length of 48.75 inches, with a length of pull of 14.25 inches. Drop at the comb was 1.25 inches and drop at the heel was 2 inches. We could find no fault in any of the dimensions, and the fit was fine for all members of our team. The weight of the shotgun was 6.1 pounds, only slightly heavier than the other two test guns and a difference that we considered a non-factor.

We were a little disappointed in the trigger-pull weight, which touched off at 6 pounds. A lighter touch off around 5 pounds would improve the smoothness of shooting the shotgun and could be achieved with a trip to the local gunsmith.

Acquiring targets over the 10mm tapered ramp with the white mid-bead and red front sight was a shooting pleasure and target breaks were the most solid of the three 20s. There were no functioning problems with either type of ammunition.

Both the Super Sport and the Cordoba models operate on the Inertia Driven system that features only three moving parts—the bolt body, the inertia spring and the rotating bolt head.

Not only is this system effective (although we found it is slightly louder than the gas-operated shotgun) and lightweight, it makes the Super Sport much easier to disassemble, clean and reassemble. That is a favorable factor for any shotgun enthusiast. Spent shells were ejected with authority during our tests, which we consider another plus.

Overall, this is an ideal competition shotgun that can easily serve double duty in the field.

Designed as a hunting gun for the high-volume dove-popping found in South America, the Cordoba takes its name from the city of Cordoba, Argentina. We immediately liked the black GripTight coating on the synthetic stock and forearm. The feel of the shotgun with the slight palm swell in the grip and the thin forearm are equal to the Super Sport, but the coating provided a better, more secure surface, we felt.

As with the Super Sport, the Cordoba’s ComforTech stock provided an acceptable fit for all of our team members. Once again, we did not experience the advertised reduction in felt recoil—all of the test guns, including the gas-operated Beretta, produced very similar light shoulder shock.

The overall length of the Cordoba was 48.5 inches, with a length of pull of 14 inches; a drop at the comb of 1.5 inches; and a drop at the heel of 2.0 inches. The slightly lower stock, combined with a 10mm ramped rib, is a fine configuration for a field gun that does not hinder a shooter on the clay target range. Both the unloaded weight of the shotgun and the trigger pull weight were exactly the same, 6 pounds. This is fine for the weight of the shotgun as far as handling ability, but as noted with the Super Sport, we would have preferred a trigger touch off to be around 5 pounds.

Although the difference in weight between the two Benelli shotguns was minor, we did prefer the feel and balance of the Cordoba. This is what a fine field gun should feel like, a solid shooting tool capable of knocking down a lot of targets or birds while remaining a pleasure to fire and handle.

One of the other features available with both the Super Sport and the Cordoba is a see-through slot on the forearm that can be used to determine the number of rounds in the magazine. The feature is a nice touch that would find more use in the field than on the clay target range. We liked it.

As noted earlier, the Cordoba’s recoil operation is the same Inertia Driven system as in the Super Sport. This is a reliable, although noisy, system that provided flawless function in all of our shooting tests.

Disassembly and reassembly of the Cordoba was a breeze and allowed for easy cleaning and lubrication of the working parts.

One member of our test team had put a similar Cordoba through its paces during a hunt in Argentina and reported that while handling nearly 5,000 rounds during four days of dove shooting, the shotgun performed without a hiccup. That is quite a testament for a shooting tool capable of heavy-duty service both on the clay target range and in the hunting fields.

The more traditional look and feel of the Beretta earned immediate plus marks from the more veteran members of our test team. Some “experienced” shooters just like wood over synthetic. Our test model featured a satin-finished walnut stock and forearm, complete with gold-engraved pheasants and a woodcock on the receiver. An after-market Angle Port action release lever had been added to the Beretta and greatly enhanced the loading process.

Slim and trim like the two Benelli shotguns, we preferred the heft and balance of the Beretta, which featured just a little more weight in the forearm to help the shotgun glide through targets. The balance seemed to be more between the hands, and we liked the ease in which the Beretta moved through targets.

The Beretta was the shortest of the trio at 48 inches in overall length and tied the Cordoba as the lightest with a weight of 6 pounds. The drop at the comb was 1.5 inches and the drop at the heel was 2.1 inches, making for an acceptable fit. The length of pull was 14.5 inches, which was a little long for the shorter members of our test team. However, when shooting clays from a pre-mounted position, there were no handling problems. A trip to the gunsmith might be required before the Beretta is used in the field by a shooter with a shorter length-of-pull requirement.

A large white bead as a front sight on the 8mm flat rib provided a good sight picture for acquiring clay targets with the Beretta.

As noted, the feel of the Beretta was slightly better than the two Benelli shotguns, and it seemed easier to glide through targets because of the additional weight in the forearm. Because it is gas operated, the action of the Beretta is slightly less noisy than the two other shotguns, and our perception was that the functioning process was quicker.

However, we became very aware that disassembly and assembly of the Beretta was more complicated because of the shotgun’s gas-operated system. The internal mechanisms were much quicker to become fouled with burnt powder and residue, requiring more frequent cleaning sessions. Therefore, on the cleaning chore side of the tally sheet, both of the Benelli shotguns earned better reviews than the Beretta.