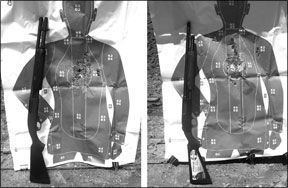 For home defense, the focus is usually on 12-gauge shotguns, but we recently tested two 20 gauges that for many-if not all-folks would be better choices because of their lighter weight and reduced recoil. Our test products this round were the Remington Model 870 Express Pump Synthetic 7-Round 3-Inch 20 Gauge No. 81100, $397; and the Mossberg 500 Persuader/Cruiser 3-Inch 20 Gauge 6-shot No. 50452, $388.

Both guns were matte-black synthetic-stock pumps with 3-inch chambers, with 18- or 18.5-inch barrels and weights between 5.1 (Mossberg) and 6.5 pounds (Remington).

Not to spoil the surprise, we liked both of these 20 gauges a lot, and we would buy either one of them. In particular, for those shooters who already own an Express or Persuader 12 gauge for hunting or other uses, wed recommend staying with your “house” brand and buy the 20 gauge youre already familiar with. The reason many shooters should prefer these 20s for home defense over a bigger 12 gauge is that theyre noticeably lighter than the 12s. In the September 2005 issue, we tested the Remington Model 870 Express Synthetic 12 Gauge Magnum No. 25077, $345, which weighed 7.25 pounds, and the Mossberg Persuader Model 590A1 12 Gauge Magnum No. 51411, $443, which weighed 6.9 pounds. The 20s we tested weigh three-quarters of a pound to nearly 2 pounds less, respectively, than their counterpart 12s, which make them better choices for women or teenagers who might want to shoot them, but they dont give up much in terms of hall-clearing power or capacity.

To function-test these pump guns, we took a trip to the tactical range and fed them a diet of common 20-gauge loads. Our test rounds were Remingtons ShurShot Heavy Dove 20 Ga. R20HD-S 2.75-in. 2.5 Dr. Eq. 1 oz. No. 8s; Sellier & Bellot 20 Ga. Field Load 2.75-in. 2.75 Dr. Eq. 1 oz. No. 8s, and Remington Premier STS Steel Light Target Load 20 Ga. STS20LS7 2.75-in. 2.5 Dr. Eq. 7/8 oz. No. 7s. At the firing line, both guns functioned properly, and we recorded no failures to fire or stoppages of any sort, though we had some trouble loading the Mossberg, which we detail below. In terms of materials, the Mossberg had an aluminum-alloy receiver that really cut its weight, while the Remingtons was steel. Both had alloy trigger guards, and the safety button for the Remington was steel while the Mossbergs was plastic. We like the Remingtons use of a steel receiver and buttons and metal trigger guard.

Both guns have only the most rudimentary sights, which is fine for how they will probably be used, with shotshells. At close quarters, either shotgun would be an effective self-defense choice. Firing at 10 yards, we shot coffee-saucer-size patterns. However, the Remington holds six in the magazine and the Mossberg five, and that extra round might be the tiebreaker for some owners, as it was for us.

After the bang-bang section was complete, we moved on to other areas of function to separate them and call a winner. Heres what we found out:

In their commercial form, the Persuaders are virtual duplicates of the Mossberg military 500 and 590 models. Persuader shotguns are available in both 18.5-inch and 20-inch barrel lengths, traditional blued or non-glare matte finishes, and some come with Ghost Ring sights. Available in .410 bore, 20- and 12-gauge models, Mossberg Special Purpose shotguns feature an anti-jam elevator, dual extractors, black synthetic stocks, and drilled and tapped receivers (20 and 12 gauge only) for scope base and optics installation. The Persuader/Cruiser models come with standard stocks, but also include a Cruiser-style pistol grip kit, which we didnt use in our testing.

The Mossberg Persuader 20 gauge in this test had a fixed Cylinder choke blued-steel barrel, single front-bead sight, and 5+1 capacity. As we noted above, in the September 2005 issue we tested the Mossberg Persuader Model 590A1 12 Gauge Magnum No. 51411, and weve also checked out a similar 5+1 12-gauge 500A Persuader No. 50411 in the January 2001 issue. The major differences between the 20 and the 12s are the heavy barrel and matte-black Parkerized finish on the No. 51411 tested in 2005.

The 20-gauge 6-shot No. 50452 measured 38 inches in overall length. The receiver was aluminum. The stock and forearm were black pebbled polymer, and the buttstock had an LOP of 14 inches, a drop at comb of 1.7 inches, and a drop at heel of 2.5 inches. There was no cast. The gun had no rib, and the front sight was a simple gold bead. A plus was Mossbergs 10-year warranty.

Operating the Mossberg, we could work both the safety and the slide release without changing the shooting-hand grip and without having to dismount the shotgun. To rack the slide, we pulled the trigger finger off the trigger and depressed the action-lock lever with the middle knuckle of the right hand. Lefties had it even easier; they could pull the trigger finger off the trigger and release the button without having to shift the hand on the grip. The Mossberg tang safety was likewise ambidextrous, positive, and easy to get to.

The stocks are similar in that they are composite plastic with the same basic measurements, but there are differences. The pistol grip on the Mossberg is about an inch shorter than the Remington.

We preferred the longer grip area of the Express; mainly because it allowed the shooter to have a flatter reach to the trigger, rather than having to cock the hand down to reach the trigger. However, the Mossberg came with a pistol grip, which gave it flexibility the other gun couldnt match. With the pistol grip on, the Mossberg measured only 29 inches in length and weighed less than 5 pounds.

We thought the pebbled finish on the pistol grip and forend didnt provide as good a grip surface as the Remingtons checkering. When we tried to shoot the Mossberg fast, our sweaty hands would either slide off the forend or loosen on the buttstock grip. The Mossberg, however, had a noticeably better buttpad than the Express, in our view. Its ventilated design was much softer, and the edges were already rounded. The Mossbergs front sight was rudimentary, but effective, and we could see the gold bead on the Persuader better than the gray bead on the Express. Also, the Mossbergs receiver was drilled and tapped for optics. This was a nice touch the other gun lacked.

Elsewhere, though we judged the large opening in the receiver to allow for easy loading and unloading, sometimes the nose of a shell caught on the feeder bar, causing a jam. And while we were handling the gun dry, we noticed that the forearm felt loose, and pressure on the forearm caused the action to stick. But while we were shooting live rounds fast, neither was a problem.

Like the Persuader, the Express line is wide and varied. We counted 19 existing Express models on the Remington website, and several other 870-style specialty shotguns to boot, along with eight other 2008 introductions. Narrowing the field, there are four Express Synthetic guns, including the 4+1 12 gauges with 26- and 28-inch barrels; the 4+1 18-inch-barrel 12 gauge; and the 4+1 20-inch-barrel 12-gauge deer gun with open sights and rifled choke.

with all three guns having 18-inch fixed Cylinder choke barrels, no ribs, single front bead sights, and non-glare matte finishes. The 20 gauge came with a 3-inch chamber, fit six in the magazine tube (plus one in the chamber for a total of seven), and measured 38.5 inches in overall length. It had an LOP of 14 inches, a drop at comb of 1.5 inches, and a drop at heel of 2.5 inches. We didnt detect any cast. It came with a trigger lock, which the Mossberg lacked.

The Mossberg and Remington buttstocks included molded-in studs for rear sling swivels, and the Remington also included a swivel stud on its barrel clamp. The Mossberg was threaded to accept a stud in its cap, but the screw-in stud itself (part no. 36) wasnt included.

On the Remington, the front post is mounted on a stanchion, but the receiver is rounded, except for a flat area that measured only a quarter inch in width. This doesnt help the shooter index the receiver to the sight, in our view. As we noted above, the front

sight on the Mossberg was a standard bead, but the top strap was flattened and grooved, and the Mossberg was already drilled and tapped for an alternative sighting system, such as a Ghost Ring. These are features Big Green should add to the Express Synthetic.

Righties found the Remingtons action bar lock, located on the left side of the lower receiver in front of the trigger guard, easy to manipulate with the trigger hand, but that move required the shooter to push his trigger hand forward and cover the trigger guard with the palm of the hand, and we would prefer not to move that hand off the pistol grip. Our testers said this gun was easy to handle and pointed fast, and our police shooters said they would strongly consider giving up their 12 gauges for the lighter 20, mainly because of the 20s overall smaller feel. On the safety front, our testers liked having the orange follower underneath the gun because it made inspection easy. And we preferred the 870s texture on the grip and forearm; the checkering made the gun easier to hold with sweaty hands, in our view.

When worked fast the Express held the edge, our testers said. The action released smoothly after the shot and with minimal pressure on the forearm, speeding follow-ups. The steel Mossberg trigger broke at 6.1 pounds, but the Remington trigger, also steel, had the lighter let-off, 5.5 pounds. However, we liked the Mossbergs trigger shoe better because it was wider. Also, we noticed the shape of the Expresss stock transmitted more recoil than the Persuader, so Remington should consider a ventilated recoil pad rather than the solid version on this gun.