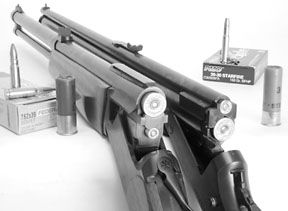 Many’s been the time when members of our staff have been afield deer hunting and walked into a mess of quail, and wished for a shotgun to knock down a bird or two. Or, conversely, when we’ve been fall turkey hunting with a shotgun and saw a huge buck rise up 75 yards away, making us pine for a rifle. Though such situations occur when we’re least prepared, which is to say most of the time, there is a way to have our cake and eat it, too.

The answer: Combination rifle and shotguns. Though far less popular in the United States than in Europe, combo guns such as the $511 Savage Arms Model 24F-12 12 gauge/.30-30 and the European American Armory-imported Baikal IZH94 12 gauge/7.62x 39mm, $425, have a legitimate place in the birding/big game sportsman’s gun closet.

Certainly we would not make the case that wedding a rifle barrel to a scattergun is the most elegant solution for taking vastly different kinds of game. Most deer hunters we know wouldn’t dare pop off a shotshell if they were pursuing a big buck. Now if they were looking for a doe or a hog to put in the pot, that might be a different story. If the meat hunter is lucky enough to wander into a target-rich environment where a tasty wild pig cavorts with wildfowl, then who’s to say whether a backstrap pork loin trumps a pair of quail? Why not be ready for both?

Toward that end, we shot patterns and groups with our combo pair, trying to assess whether either gun had an edge in accuracy or shot placement. In our view, we think the Baikal is the better buy, for the reasons we detail below.

How We Tested
We ran a number of rounds through these rifle/shotguns, matching up the 12-gauge shotshells easily, and doing our best to find comparable pairings of thutty-thutty ammo and 7.62x39mm fodder. Because we couldn’t get an exact match on the rifle end, we picked these .30-caliber rounds as the closest two we could find.

For shotshells, we used Estate Cartridge’s 2.75-inch 2.5 dr. eq. load, which pushed 7/8 ounce of No. 8 shot at above 1,100 fps in both guns. PMC’s 3-inch magnum steel load had a lot more juice, developing around 1,400 fps in both guns with a 1 1/4-ounce No. 3 shot load packed atop the maximum dram equivalent powder charge. Because we’re fools for recoil, we also stuffed in more Remington Nitro-Steel 3-inchers than we care to admit. This load was rated on the box at 1,500 fps, but we got slightly lower velocities with it than with the PMC shell, even though the Remington round used 1 1/8-ounces of No. 4s with the maximum dram equivalent of powder.

The 7.62x 39mm loads all shot smaller bullets, such as the Federal Classic 123-grain Hi-Shok SPs, PMC’s 125-grain PSPs, and Winchester’s 123-grain SPs. Here’s what we thought of the guns, evaluated on a direct head-to-head basis:

The Savage has a black plastic stock and the Baikal a handsome walnut stock. The plastic stock is more durable, but the wood stock looks better, so the choice is strictly the shooter’s preference. However, we liked the Baikal’s wood furniture better.

The recoil pad is thicker on the Baikal than it is on the Savage, but it did not make a difference when it came to felt recoil, we thought. Both guns felt about the same (mild recoil with the rifle cartridges and Winchester AAs and heavy recoil with the 3-inch magnum loads). The trigger guard on the Savage was plastic but the Baikal’s was steel. The Savage had front and rear swivels, which the Baikal lacked.

The Savage had a single-trigger external hammer with a selector built into the hammer. The Baikal had two triggers, with the trigger toward the muzzle firing the shotgun barrel. With the Baikal, the shooter chose which barrel to fire when he selected the trigger, whereas on the Savage he had to change the setting on the Savage’s hammer manually. For a snap shot, the Baikal probably had the advantage on the first shot (depending on which barrel needed to be fired), and a clear advantage for a quick second shot. The Savage trigger was crisp and predictable and broke at 5.5 pounds. The Baikal’s shotgun trigger broke at 7.5 pounds and showed a little creep. The rifle trigger broke at 7 pounds and also showed some creep before releasing. Interestingly, the Baikal’s rifle trigger was offset to the left and curved to ensure the shooter could tell by feel which trigger he was on.

Also, the safety on the Baikal was much easier and quicker to operate than on the Savage. The Baikal automatically cocks the hammers when it is opened, and the safety is automatically put on. The Savage’s hammer must be manually pulled back for each shot and the trigger selector changed if you desire to fire the other barrel. The Savage’s cross-bolt safety is not affected by opening or closing the action.

The rear tangent sight on the Savage was stamped metal that was elevation-adjustable only. Even in its lowest setting we found the rifle shot 5 inches high at 100 yards. The rear sight on the Baikal was milled and dovetailed in. It was adjustable by loosening a flathead screw (windage only). The front sight on the Savage was a standard post, but on the Baikal the front sight seemed to be elevation adjustable. The Baikal shot 2 inches high at 100 yards. The Savage was drilled and tapped for a supplied scope mount on the right side of gun between the barrels at the breech end. The Baikal had a convenient dovetail scope mount on top of the barrel starting at the breech.

The Baikal had the shotgun barrel on top, and the Savage’s was below the rifled barrel. The Baikal’s shotgun shot point of aim at 40 yards, but the Savage shot 12 inches low. Both are 12 gauges with 3-inch chambers and Modified screw-in choke tubes. Our patterning tests showed densities consistent with what we would expect from a Modified constriction.

The Savage’s action swung open easily when the tang lever was pushed to the right. The Baikal was much stiffer, a result of having to cock the hammers as the gun is opened. To remove the forend on the Savage, the shooter must use a flathead screwdriver, but on the Baikal he would simply pull down on the shotgun-style lever.

The Savage shot all three .30-30 rounds consistently, we thought, and somewhat better than the Baikal did with its ammo. The Federal Classic’s average group size was 1.7 inches, followed by 1.9-inch groups with the PMC Starfire hollowpoints. But the Savage really liked Winchester’s 170-grain Silvertips, shooting best-of-test average groups of 1.6 inches with the ammo. As we noted, the Baikal was a step back, with its best groups being 2.0 inches with Federal Classic 123-grain Hi-Shok softpoints. 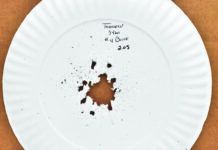