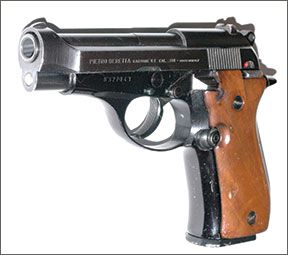 If you have a handgun for what some consider to be a sub-caliber round, it might be comforting to have lots of shots on hand, because you just might need them. Taking our tongues out of our cheeks now, the 380 can be an effective self-defense handgun cartridge, particularly with todays hotter JHP loads – if you can find any. There are zillions of good used 380s out there, though in todays market you might have the devil of a time finding one. We managed to acquire two, both slightly used, just like what you might have to consider in todays super-tight gun market.

Our test pistols were a Beretta Model 84 ($600-$650) and a CZ Model 83 ($550 on up). Both were DA/SA pistols. Their size was about that of the two 40-cal pistols we tested recently here in Idaho, the S&W M&P 40 Compact and the Kahr CW40 (March 2013). Most of the small nines weve been testing are considerably smaller than these two 380s. We wouldnt call either of them pocket guns. Theyd fit a purse or a decent holster nicely, though. They both had fat grips, so theyll bulge the concealment clothing somewhat more than a 45 auto.

These two guns were uncannily alike in some ways, though of completely different designs by two proud old makers. Although both were DA/SA guns, they could be carried cocked and locked. They had ambidextrous safeties and external hammers. They had staggered magazines that held 12 or 13 rounds. Their two-quick-shot, DA/SA feels were so much alike we could not tell a difference. Both were simple blowback actions, with enough mass to their slides that they didnt require barrel-locking mechanisms. The slides simply reciprocate after each shot and the barrels never move. Both had metal frames, a breath of fresh air, we thought, in todays plastic-dominated market.

Like the rest of the world, we currently have a shortage of common ammunition here in Idaho, so we had to test this pair of 380s with just one type of ammo, 95-grain FMJ, in two persuasions. Most of that fodder has about the same ballistics, so what we got is about what youd expect from anything you might find of a similar nature. Cor-Bon makes hotter 380 JHP ammo, as does Federal and a few others, but none was available to our test team at this writing. Heres what we found.

Beretta Model 84 380 ACP, about $600
The lightly scarred wood grips of the open-barrel Beretta 84, sometimes known as the Cheetah, were hand filling. If you have small hands, this one might not be for you, but all of us here liked it just fine, with one gripe. The grips were slick beyond belief. Theres no checkering on the wood, but worse is the lack of any sort of grip enhancement on the front and back straps. The bottom of the front strap flares forward, which helps keep the hand on the gun, but the mild recoil doesnt really try to rip the gun out of your hand or twist it mercilessly like with some of the small nines or the lighter forties. Still, we thought there should be some traction there, be it checkering, stippling, serrations, maybe even some rubber cement artfully dribbled on the frame. The CZ also suffered from this lack of traction, and also had a flared grip.

The Beretta was comfortable in the hand. The generous frame extension below the hammer kept the hand from getting bit. All the metalwork was well done, with the flat sides of the steel slide showing off good bluing. The sides of the well-anodized aluminum grip frame were also dead flat. Inside the gun, the workmanship was good, too. We confess to a weakness for guns made the old way, with machined metal frames instead of the ubiquitous plastic of today. Beretta does nice metalwork, and this was a well-made gun. The sights were small but adequate. The front blade was part of the slide, and the rear was driven securely into a tight dovetail.

Takedown was simplicity, one of the slickest and easiest systems weve encountered. Clear the gun, then push a button on the left side and twist a lever on the right side downward. Everything is easy to move. Once the lever is downward, the slide and barrel slip off the front, revealing a simple spring-and-plunger recoil setup. Removal of the spring and then the barrel was easy. Reassembly was just as easy. Blowback guns like these are usually pretty simple to get apart and back together.

We found the magazine to be hard to load. Both the Berettas and the CZs were nasty, and would break fingernails and make tempers short if you were in any kind of a hurry. But we found it a joy to shoot these guns. The recoil was mild and enough accuracy was there. We found the Berettas SA trigger more to our liking than that of the CZ. Its break was clean and tidy. The gun hit where it looked well enough for any uses, we thought. Our groups were on the order of 2.5 to 3 inches at 15 yards. Different ammo might give better groups, but we were satisfied with what we got. Neither of these was a target gun. It was lots of fun to shoot fast pairs with the Beretta, either with the first shot double action and the second one single, or both single action. We found it easy to place our shots where we wanted no matter how fast we shot.

Our Team Said: We very much liked this used Beretta. While the 380 would not be our first choice for self defense, its lots better than nothing at all, or anything smaller. If you were stuck with the cartridge for any reason, we thought the average shooter who has no need for extreme concealment would be happier with a gun this size than, say, a Kel-Tec P3AT or Ruger LCP. Though the latter two would be far easier to conceal, the bigger guns are far more fun to shoot. Except for the lack of grip traction, we could not fault the Cheetah.

CZ Model 83 380 ACP, about $550
This model was discontinued in 2012, and its last listed price was $452. At first, we wondered why in the dickens CZ stopped making it, but we think we found out why when we opened it up. So far as we can tell, CZ-USA no longer offers any 380 pistols at all. We tested one of these in 2010 and it got our highest recommendation. This test gun was slightly used, and considerably older than the other one. It had modest bluing wear on the sides of the slide near the muzzle, and a few other signs of light wear. The all-steel frame gave this gun somewhat more weight than the Beretta.

Though the CZ 83 had some smoothed-off checkering molded into its plastic grip panels, its grips were about as slick as those on the Beretta. The trigger guard bordered on huge, so this one might be the better choice if you like to shoot wearing heavy winter gloves. Although the CZ had a spur hammer, we didnt find it any easier or harder to thumb cock than the other gun. Its sights were a little bigger and bolder than the Berettas. Again, the sights were all steel. The front blade was pinned in and could be replaced to change elevation to suit your best choice of ammo. Like the other guns sight, the rear was driftable for windage.

The CZs ambi safety could not be put on with the hammer down. Therefore, the CZ was always ready to shoot if you had a round in the chamber with the hammer down: Pull the gun and press the trigger. The Berettas safety could be put on with the hammer down: Pull the gun and wonder why it wont shoot. The CZs hammer was rebounding, and could not reach the firing pin unless the trigger was fully back. Neither could the Berettas, though the Beretta had a half-cock position. We found the CZs safeties not as easy to use as those on the Beretta. They were stiff. The CZs magazine could be dropped either by using the index finger or the thumb. Thus it was ambidextrous. We found it easier to use the index finger because the grips bulged and blocked our thumb. The Berettas mag release can apparently be reversed if desired. The magazines of both guns dropped free when released.

Takedown of the CZ 83 is similar to that required for the Walther PPK. With the gun clear and the magazine out, the trigger guard is pulled forward and down until it clicks into the takedown position. Then the slide is pulled rearward, lifted, and eased forward off the frame. The recoil spring circles the barrel, like that of the PPK. The barrel is pinned to the receiver. A good look at the innards of this gun revealed good reasons for its discontinuance. There are a great many parts inside, all of em machined. We suspect CZ was losing money on this one. The ejector, for instance, looks hefty enough to eject 50-caliber Browning rounds. Its part of another piece thats pinned into the gun, and was machined on all surfaces. It had its sharp edges all carefully deburred, apparently by hand. We did not see any investment castings in this gun. The safety levers and the slide stop, with their nicely serrated operating surfaces, were all machined. The magazine release was machined. The hammer and trigger, ditto.

Though some parts may have started life as castings, we could not find any parting lines on any of the guns myriad parts. This was old-world gunmaking. The Beretta was made much the same way, but in the Cheetah we saw what could have been some castings, and that gun had nowhere near the number of parts contained within the CZ.

We were impressed by the intricacy of this design. It wasnt beautifully finished inside, but the work was well done and extremely sturdy looking. If you compare it to a modern S&W M&P with all its stampings, the M&P parts look too small, yet we know they work very well. We suspect this overbuilt CZ will last a long time.

Although the recoil of these 380s must be judged to be relatively insignificant, on the range we found the recoil of the CZ to be sharper than that of the Beretta despite the CZs greater weight. The line of recoil is the same height above the hand. We cannot explain this, yet there it is. Like the Beretta, the CZ shot close enough to its sights that we could not complain.

Our Team Said: We got about the same degree of accuracy with the CZ as with the Beretta, groups on the order of 2.5 to 3 inches at 15 yards. There were no problems at all with the gun. It fed, fired, and ejected perfectly, though ejection was not all that far from the gun. Again, we had fun shooting it fast, so if you buy one of these, be sure to stock up on ammo (good luck with that) because we think youll like shooting it too. We downgraded it for the lack of traction on the grips. That might not be significant to you, but we guarantee when your hands are sweaty, youll wish for a better grip on the gun.