When making the decision to purchase a new handgun, the question of which cartridge it will fire is the first to come up. Readers of Gun Tests are undoubtedly aware of the debate that has raged for a century about which cartridge is better between the 9mm Luger and the 45 ACP. A surface inspection of the question yields some clues such as the tendency of 9mm Luger handguns to hold more ammunition (sometimes double the magazine capacity of a 45 ACP) and 45 ACP handguns to recoil more strongly than the 9mm. The truth is that neither handgun is better in all areas, but I will use some uncommonly seen metrics derived from my slow motion videography to better explain the issue. As a disclaimer, my favorite handgun was a 45 ACP (which I sold, like many people do at one point with their favorite gun), but my carry gun is now a 9mm Luger. I sold the 45 ACP so that I wouldn’t fret every morning over which gun to carry.

Common wisdom says that a 9mm bullet (0.355 inch in diameter) may expand, but a 45 ACP (0.451 inch in diameter) will not shrink. Great point, since in actual shootings hollowpoints fail to expand about 30% of the time. But how important is the difference of one-tenth of an inch in bullet diameter? If a person were to open his hand, he could fit 144 9mm Luger bullets on that open hand. In the same hand, 60 expanded 45 ACP JHPs can fit. Using a slightly different measure, the frontal body of a 5-foot-10-inch-tall man can be covered by 4520 FMJs or 1875 expanded 45 ACP JHPs. Increasing hit probability by increasing the size of the chunk of lead and copper slightly is not practical, because the bullets themselves are very small.

For a given weight, larger-diameter bullets slow down faster. This makes a safer situation for almost everyone involved because it increases performance and reduces the chances of overpenetrating the target. There is a mechanical limit to how large a hollowpoint can expand to and still stay in one piece. Thus, the 45 ACP will always make bigger holes than a 9mm Luger will be able to do. What is key is to shoot a variety of bullets in your firearm into 10% ballistic gelatin, or water-soaked newspaper if you don’t have access to ballistic gelatin. It is essential that the bullets reliably expand and penetrate to the neighborhood of 12 inches deep in either media. Naturally, depending on construction, heavier bullets will tend penetrate more. The most important factor is reliable expansion. If you have the time, place four layers of heavy denim in front of the target and check again for bullet expansion. An expanding 9mm Luger bullet is far more effective than a 45 ACP that failed to expand.

To see how 10 different 9mm Luger JHPs and 10 different 45 ACP JHPs actually performed, Gun Tests hired me to shoot those rounds into law enforcement-standard ballistic media. The test guns were a Walther P38 with a 4.9-inch barrel and a Dan Wesson 1911 with a 5.0-inch barrel. I shot them from a Ransom Rest at a distance of 10 feet from the ballistic media. Bullet-impact velocity and penetration depth are presented in Figure 1.

In Figure 2, we see that 45 ACP is the expansion winner for most of the ammunition brands tested. Expansion is always desired, but it plays a distant second in importance to shot placement. What matters, given proper shot placement, is the amount of force exerted by the bullet on the fluid medium — which is equal to the force exerted on the bullet by the fluid medium and proportional to the amount of damage done to the target. The most useful expression of the drag force is the kinetic energy loss in the medium. Slow-motion videos may be measured so that the kinetic energy loss (or transfer) of a given bullet can be determined, assuming that the weight of the bullet is known and the video is of suitable quality for velocity measurement. An example of a Federal Expanding Full Metal Jacket (EFMJ) hitting an interior wall should suitably illustrate this technique as shown in the Figure 3 series:

Figure 5:
The 9mm Luger Speer 124-grain +P Gold Dot hit with an initial kinetic energy of 423 ft-lbf, while the 45 ACP 200-grain +P Gold Dot hit at 440 ft-lbf and the 230-grain Gold Dot impacted at 311 ft-lbf. The expanded diameters were nearly the same, but the 9mm was lighter, so it decelerated more rapidly than did the 45 ACP. The tradeoff is that the 200-grain bullet continued on and was more effective than the 9mm starting at the 6.2-inch penetration depth. Note that 357 Magnum data is included for reference. This is from a 4.0-inch-barrel revolver, and the initial kinetic energy was 560 ft-lbf. A foot-pound of force (ft-lbf) is the amount of force needed to lift a 1-pound weight 1 foot off the surface. That’s not much force, but when it’s concentrated in a small area like a bullet – look out. Also, terminal force has a corresponding effect — more energy downrange means more recoil.

The first thing that most new shooters realize about handguns is that the 45 ACP kicks hard and the 9mm Luger doesn’t kick as much. Both calibers exhibit recoil significant enough to warrant a discussion about how the recoil affects the speed of a follow-up shot.

The Figure 6 Series and Figure 7 Series shows frames from slow-motion videography of a Glock 19 (9mm Luger) and a Dan Wesson 1911 firing. The vast majority of modern handguns use the Browning short-action principle, including Glock and 1911-style handguns. All semi-autos must experience a delay, during which the momentum of the slide’s rearward motion must be overcome by the recoil spring and the slide begins to be pushed back into battery.

This is a function of the mass of the slide and the spring pressure needed by each cartridge/gun combination for safe operation.

Doing the math, the 9mm handgun remained stalled in recoil (slide fully rearward) for 0.0058 seconds (Figures 6b-c), and the 45 ACP handgun was stalled for 0.0075 seconds (Figures 7b-c). That’s a difference of 2 milliseconds, which is important because it confirms that higher-recoiling guns will produce slower follow-up shots, regardless of the skill of the shooter.

When people ask me what is the best handgun for self-defense?, I tell them to choose the hardest-kicking firearm that you can accurately shoot. Assuming a JHP expands and retains its structural integrity, your best bet is to look for the cartridge that produces the greatest kinetic energy at the muzzle. Using real-weapon velocity data from BallisticsBytheInch.com, Figure 7 indicates what muzzle kinetic energy you can expect from actual guns.

Cartridge Comparisons, Figure 8
Handguns are more limited than rifles in that the size of the handgun, and specifically the grip size, is the determining factor in how ‘powerful’ a cartridge can be used. A handgun must fit your hand comfortably, otherwise the learning curve to good shooting is made steeper – and handguns are unforgiving. If your hand limits you to smaller grips, you will either be looking at a single- or double-stack 9mm/40 S&W/357 SIG handgun or a single-column 45 ACP like a 1911. The good news is that if you want to step up in terminal performance (Figure 8) beyond the 45 ACP, it’s possible to find 1911s chambered in 40 S&W, for which some loads will beat some 45 ACPs. Likewise, the 400 Cor-Bon and 460 Rowland are usable in a variety of 45 ACP handguns. Gun Tests covered drop-in barrels for those two rounds in the January 2006 issue, and as a result of that experience, the staff recommends factory or gunsmith refits if you want to step up to those two semi-custom rounds. Of course, there are production pistols chambered for the 10mm, which eclipses both the 400 Cor-Bon and 460 Rowland at the top of the pistol-power curve, depending on the loads chosen.

Our Team Said
So which is better: 9mm Luger or 45 ACP? The answer is that they are functionally identical — the target will not know the difference because the difference is so small. They are certainly better choices than the 380 ACP or 38 Special, but no cartridge will ward off evil spirits or drop a guy with a near miss.

So, to find out your top-line personal performance, we recommend shooting the challenging qualification course for the FBI Special Agent starting with a 9mm Luger in that test. Then, then step up to a 45 ACP and see if you can still pass the qualification.

If you want more performance than the 45 ACP and you want to move up further, borrow a friend’s 357 SIG and so on until you reach the 10mm or 460 Rowland. Those would be a good maximums to stop at because the physical size of the guns will begin to get onerous to carry.
With strong JHP bullets, the future for rounds hotter than 45 ACP is increasingly bright for those shooters who can handle them. These shooters know that when it comes to terminal performance, you don’t get a second chance to make a first impression. 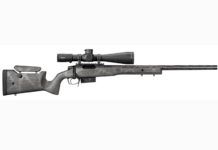 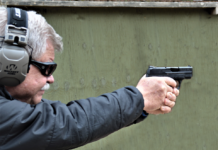