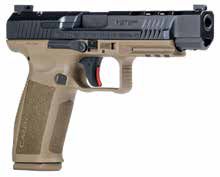 The letter about shooting 22 Short ammo in a Marlin 39A takes me back to my first gun, a Remington Model 514 single-shot bolt action. It was a Christmas present in the late 1940s and was chambered for 22 Short, Long, and Long Rifle. Most of the time I used 22 Shorts because I often could not afford Longs or Long Rifles. Sometime in the early 1950s, I had trouble ejecting the longer Long and Long Rifle casings. I finally learned that the Shorts eroded a ring in the chamber just ahead of their casing. The Long and Long Rifle cases would expand into this ring and would not extract. The precious Model 514 rifle became useless. So, yes, don’t shoot Shorts extensively in a three-cartridge-rated gun. — Harold

Thank you, Harold. We mention this same problem on page 20 about the Henry Golden Boy lever action, rated for 22 S/L/LR. Also, examine fired cases carefully to spot other problems, as below. — Todd Woodard 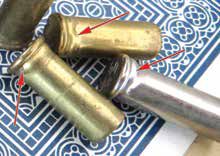 Todd, do you have any plans to test the Canik Mete SFT? I’ve been considering the purchase of one because of the light trigger and one particular YouTube video that stated, and then showed, how the shooter does not have to alter the hand grip to depress the magazine release. That means everything to me because it will be female friendly. I have to consider the wife when I buy a new house gun because she has to be able to effectively use the pistol when I am not home. — Kent

Hey Kent: No, we don’t currently have the Canik Mete SFT (pictured above) in our testing lineups. But I’ve forwarded your note to the staff for development. Thanks for letting me know. — tw

Re “For Defense: Shooting 45 Colt In Wheelguns and Leverguns,” October 2021

Hi, Todd. The 44 Henry centerfire cartridge is only about 1⁄16 inch longer than the 45 Schofield. The bullet size for each at the business end is 45 cal. The 1858 Remington New Army copies use a 45-caliber (Colt or Schofield) diameter of the barrels. I have competed for decades in Cowboy Action Shooting and have found that the 45 Colt rifles by most all manufacturers will load, cycle, feed, and fire the 45 Schofield in a 45 Colt–chambered rifle. All revolvers chambered for 45 Colt will, of course, fire the Schofield. My 44 Colt and 44 Remington cartridges will also mostly fit and fire in my 45 Colt replicas, the Schofield being a given. If you really insist on historical dimensions, you can load the Schofield with slightly heavier bullets and produce an OAL equal to the 44 Henry Centerfire. If you can’t be fast, dress better and use historically correct firearms and fodder. — Mark “Dirty Doc” 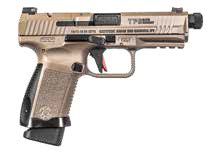 As a two-year subscriber to Gun Tests magazine, I am curious if you have any current information regarding the Canik TP 9 Elite Combat 9mm designed by SAI? I had the opportunity recently to make a purchase of one at a reasonable price, without knowing a lot about this pistol. I would welcome anything you have to offer. — Doug

Hey Doug: We haven’t tested this particular Canik (shown at left), but I’ve forwarded your note to the staff for development. — tw

I would like to congratulate the entire staff at the magazine for a job well done. I was a subscriber for years. I’m now retired and am now going back through my paper magazines from 2000 to 2006. I kept every one of them, and I am enjoying each and every one. Thanks! — Harold

Gentlemen: As a subscriber to GT for more than a decade, I enjoy your work very much and look forward to each issue, even though I might not be interested in any one particular topic.

In the March 2015 issue, your review of the S&W Model 19-4 on page 19 stated that the gun had “… S&W’s signature Magna checkered wood grips…,” which is incorrect terminology. One enclosed photo shows the early style of S&W stocks on the left, as used into the 1930s. These stocks just fill the cutout portion of the frame forging. On the right is the “Magna” style that extend upward alongside the solid area above the grip portion of the frame forging. I believe these stocks were introduced with the early 357 Magnum revolvers circa 1935, to provide a firmer grip and control recoil. They became standard after WWII on most S&W revolvers. The other photo shows an S&W Victory Model K-frame 38 Special made during WWII. These guns had smooth wood stocks of the early style.

The stocks on the 19-4 in your article are S&W “Target” stocks, which fill in the space behind the trigger guard and cover both the front and bottom straps of the grip frame. FYI, since approximately 1990, S&W, with few exceptions, has reverted to the round-butt frame style, as developed circa 1869 and used often on K-frames through the early 1900s prior to WWI. Round-butt K-frames continued to be made (primarily for 2-inch-barrel guns) throughout most of the 20th century. The square-butt (medium) K-frame was introduced in November 1904, and the larger N-frame was always square butt, from its 1907-08 introduction until the 1980s.

In recent years, many S&Ws are furnished with stocks of outside manufacture (Hogue, etc.) or with factory stocks having finger grooves, perhaps called “Combat,” depending on the type of revolver. Also, there is a section in the Standard Catalog of Smith & Wesson (Krause Publications, 1996 and later editions, pages 16-18) illustrating various grip styles, or you might want to study the S&W website in this regard.

Also, thank you for describing the effort needed to rack the slides on auto pistols. There is a tragic case documented in New Jersey some years ago in which a father and his 14-year-old son were murdered by a home invader. The boy tried to help his Dad by putting a gun into play, but the boy was unable to chamber a round into their 1911-style 45 pistol.

Readers have also asked you to discuss the 9mm and 40 autos suitable for people with smaller hands. I think this should apply to 380s and smaller guns as well. People with small hands or those with arthritis, for example, may not have the strength to manipulate slides or heavy DA trigger pulls on various handguns. In such cases, a person might be better off with a small 22 LR single-action revolver, the idea being to have the biggest gun one can shoot accurately, with a 22 being better than no gun at all. Keep up the good work! — J W