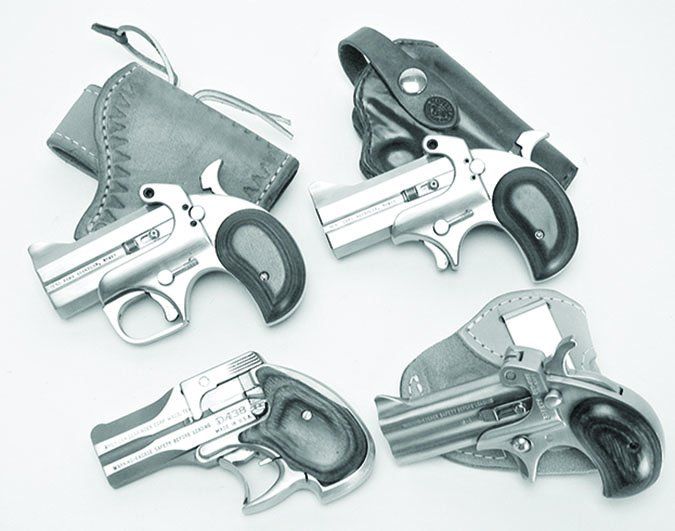 Just got my December issue today and went right to the derringer shoot-out article. I have a Bond Arms Texas Defender Derringer with barrel sets in 38 Sp./357 Magnum and 44-40 WCF, which I purchased after researching Bond Arms in your archives and reading the article Derringer Match-Up in the July 2002 issue.

No quarrel with your conclusion in both articles that derringers are not the best choice for self-defense. I use mine for plinking at close-range silhouette targets. I just like the old-time design and enjoy shooting it. I use revolvers for carry and home defense. My question is this:

Why did you not include a Bond Arms derringer in your shoot-out, or at least reference the earlier article? I think it’s a better gun than either of the others (the DoubleTap and Cobra Enterprises guns were not in the 2002 article). It’s very solidly made, stainless steel throughout, has easily interchanged barrel sets, and is comfortable to shoot with 38s and cowboy 44-40s. Optional grips are available that are longer and have rubber panels to further ease recoil. It’s as safe as any very short gun, with a rebounding hammer and a simple crossbolt safety. In the 2002 article, you rated the Bond Texas Defender as “Our Pick” for Cowboy Action shooting, and the American Derringer 38 Special as a Conditional Buy for self-defense because it was a double-action design, unlike the model you tested here. Finally, I would guess that Bond Arms is the largest manufacturer of derringers in the country.— John

Hey John, you’re right, we could have supplied some context with the inclusion of the earlier piece, since these models change very little over time. In the July 2002 issue, we said, “In today’s world, however, derringers are indeed marginalized firearms for people seeking to protect themselves. Lightweight metals such as titanium and scandium have made revolvers not only pocket guns, but in some cases possibly even shirt-pocket guns (at least in terms of heft). Double-action wheelguns offer more capacity and easier handling than derringers, we found in a recent test. Ditto that with small-frame pistols.” Because of limited samples in this segment, we tested an American Derringer DA 38 and the Bond Arms Cowboy Defender, $359, also in 38 Special/357 Mag. Also, we shot the American Derringer Model 1 and the Bond Arms Texas Defender in 45 LC/410 shotshell. In that match-up, we preferred the Bond Arms Texas Defender in 38 Special/357 Magnum, though we cautioned against their use for self-defense. We said, “There are simply better, more modern guns out there that make more sense than a derringer, in our view. If we wanted a Cowboy Action derringer, the Texas Defender, whose trigger guard can be removed, would be Our Pick.” — Todd Woodard

Re “Handgun Bullets: How Do They Penetrate in Home Materials?” November 2015

Great article! There are a lot of us out here who appreciate your time and dedication to the CCW world and home defense. There is a ever-growing population of folks who are purchasing and owning guns, and these tests you perform are essential in understanding all the parameters that need to be taken into account. Also, I would like to see a test on the new Poly ARX ammo.— David

I just read the cartridge-penetration article. Forgive my ignorance, but I own a 40 SW pistol and saw it was not listed, as were so many other popular calibers? What was the basis for the choice of caliber used on your tests?

Also, I purchased a new LWRC M6 A2 223 Rem. over a year ago, and have not fired it! My state, California, is really screwing with the gun business (owners, retailers, and manufacturers) at every level, and in every way, including land management. It is tough (six hours or more drive time) to find legal, open country that allows rifle use. I have called the state, asked friends, and searched the yellow pages for information. Gun ranges that allow rifle use are hard to find and a long drive (2 hours to 6 hours) from me. Finally, my question: Do you have any information, maps, articles, etc., that list Southern California public shooting lands?— Karl.

Bob Campbell replies: “The first question on the 40 S&W isn’t ignorance — it’s a good question. There’s simply a limit to the number of cartridges that can be tested in a certain time period. We tested a range of styles because the physics don’t vary. We don’t have to test every single chambering/brand/bullet style to be able to get an idea about how a projectile of a certain weight, design, and speed will perform in penetration media. All in, 40 S&W comes in well behind 9mm and 45 ACP in total ammunition sales. That’s the only reason it was left out. A heavy 9mm or a light 45 will give you an indication of how 40 S&W rounds will perform.” As far as shooting facilities, the National Shooting Sports Foundation has a website called WhereToShoot.org where you can sort facilities by distance from your ZIP code and by what they offer. — tw

I’ve enjoyed your magazine for more than 10 years, and I’ve never been disappointed in your recommendations. But I have one question. In the Gun Tests Value Guide for AR-15 rifles in multiple chamberings, you do not have the DPMS LR-308 rifle in your list. According to your August 2005 edition, it was your first choice and had a 4-star rating. — David

David: It was just the age of that review. The 2005-year review was two years earlier than the oldest listing in the table. In any case, the DPMS Panther Arms LR-308B was indeed “Our Pick,” and would have earned a Grade: A score. We said, “This rifle would be our first choice for match shooting, and even our first choice of these three for field use because of the confidence it gave our shooters.” — tw

Re “We Take a Close Look at Springfield M2 Bolt Gun, November 2015

In the 1950s and 1960s, I recall that 1903 rifles and 1903 M2 rifles, as well as spare milled parts and stocks for them, were common and cheap. My friends and I rebuilt these rifles, creating “exotic” mixtures. In particular, we had several M2 Springfields with no stocks, or damaged stocks. We rebuilt them as bogus full-stocked versions. Your rifle was a Springfield Armory barreled action in a Remington A3-03 stock. Unless you have documentation, this is probably a bogus rifle. Usually, they are worth much less than a genuine M2. All the reference books that I have read state that the M2 was stocked in a NRA sporter stock, or in a modified type C stock (also sporter). The M2 stock usually did not have a butt trap, and the buttplate is usually without a trap door. The sight hood is not rare unless it is the Marines version, in which the hood is higher than the usual Army one. There are a number of target and hunting-sight discs that have adjustable irises or waterhouse diaphragms. I hope that you can confirm this rifle as a rare version, because it appears to have the wrong stock for a genuine M2 rifle.

I’m sure by now you realize that your review of the Springfield Model 1922 rifle is seriously flawed in that the sample you purchased is a fake of a version that was never produced by the military. Rather than being a rare collectible, it is a legitimate action hacked into an 03A3 stock and handguard with a sleeved barrel. Rather than a value of $3,000 it is likely worth no more than $600 as a collection of parts. As a long-time subscriber, I applaud the expansion of your coverage in to collectible firearms. However, your efforts will benefit from consulting a few basic reference books before publishing. In this case, a review of the Brophy book on the Springfield would have shown you that you had been misled in purchasing the rifle.— Brad

Brad is referring to The Springfield 1903 Rifles book by Lieutenant Colonel William S. Brophy. Published by Stackpole Books in 1985, it has 624 pages. We found some for sale on ebay listed for between $85 and $250. — tw

I found your article on the Springfield 1922 M2 to be very interesting. I have had an interest in the 1922 for several years and done some research. Two books that I have found useful are Flayderman’s Guide to Antique American Firearms and Robert W.D. Ball’s Springfield Armory Shoulder Weapons 1795-1968. However, neither mentions a full-stock M2. The only full-stock ’03 .22 mentioned is Ball’s description (and photos) of the Model 1903 .22 Gallery Practice Rifle made from 1907 to 1918. Writing about the M2 Ball does say “12,000 various models of the U.S. Rifle caliber .22 M2 were produced at the Armory with the serial number range from 1 to 22,000.” I suppose it is possible that some of these “various models” might have had ’03-type stocks.

Your article has some excellent detail photos of the M2 and a lot of rarely found information on takedown, etc. Is it possible that the M2 in your article was a “one-off” made by fitting an M2 to an ’03 stock? The dimensions of the guns are very similar, making such a restocking change very doable. Do you have any information on the provenance of the gun?— David

Our Sr. Product Coordinator responds: “I purchased the Springfield training rifle that appeared in the November 2015 issue from a reputable private seller, who described it as a Springfield M2 training rifle. After the article was published, I checked back with him and he said that it is an M2, but not a 1922 M2. There were improvements that were made to the 1922 rifle. He told me the bolts are slightly different between the two versions of the rifle, but that the rifle was made in WWII, it does not have a sleeved barrel, and it is not a fake. After talking with several other gun collectors, only a few could say that they might have seen any variant of the rifle in question with a full-length stock, and none of them could produce a photo. I believe that all of the parts, with the possible exception of the wood, are U.S. government-arsenal authentic, not copies. I also believe the stock is U.S. military, and that it may have been adapted for this rifle. I think everything is correct for an M2 rifle, except the stock. I would guess that someone had an M2 rifle and the stock cracked, and they replaced it with a 1903 stock that they made fit. After doing further research, I would estimate the value at $1000 to $1500, rather than $3000.”