Hi Todd, I’ve been a subscriber to Gun Tests for several years, and I look forward to seeing every issue.

Just to set the stage up front, I don’t have a dog in this hunt. I don’t own any of the three guns featured in the article, so this is purely an objective observation. Occasionally, I’ve questioned some of the comments or findings that have been published, but today I just had to strongly disagree with your rationale for down-rating a pistol because of its caliber. I’m speaking about the S&W M&P 380 Shield EZ 180023 380 ACP: “The demerit is for its power and terminal ballistics.” My strong objection to the demerit is due to the fact that the gun is a 380 ACP. If downgrading a firearm for being a lesser size/power of cartridge, then by extension every firearm you’ve tested must be degraded because it’s of a lesser caliber than other firearms you’ve tested. You must down grade every 22 LR firearm because its terminal ballistics are inferior to most other calibers. All Wonder 9mm pistols and 38 revolvers must be downgraded because their ballistics are lesser than the 40 S&W. 40 S&W and 10mm must be downgraded because compared to the 454 Casull. I think you get my drift. The 380 ACP exists because there is a need for easier-shooting rounds. You state that there are folks that need “a little help.”

Now, I want to question your results based solely on the Range Data on pages 10 and 11. The Federal HST 380HST1S380 ACP is going to put a bigger hole in an attacking target than all of the other rounds, except for the 9mm Winchester Super-X XMSHP. That bigger hole has a better chance of damage in soft tissue. On another note, all of the 30 Super Carry and the Hornady and Remington 9mm rounds overpenetrated! Why wasn’t there any mention of this very real problem? As I recall, 357 Magnum law-enforcement use was discontinued due to this very problem, with similar penetration numbers for the round. 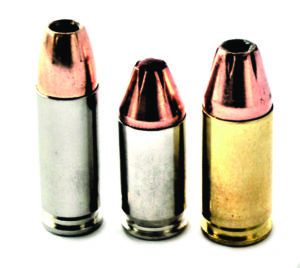 These are considerations that need to be explored before too many manufacturers crank out pistols for what I consider a “what for” round.

I hope you will reconsider your downgrading of what you consider to be an otherwise fine pistol simply because of the round it’s designed to fire. It’s not the pistol’s fault that the 380 ACP round isn’t as powerful as the Wonder 9mm. You’re comparing an apple to an orange, and that’s not being objective. Todd, thanks for taking the time to read my two cents worth. — Cal

Hey Cal: Perhaps over-penetration had something to do with LE switching from 357 Magnum revolvers to pistols in some cases, but that can be solved with load choices that are agency dictated. The migration from big, heavy, steel revolvers to lighter, higher-capacity cheaper polymer pistols had more to do with weight, capacity, and budget than terminal power. LE also has qualified immunity that reduces their exposure in case of overpenetration incidents. As for having to downgrade everything that’s lower-powered than X, where X is the top level of penetration and expansion, that’s generally not how people buy firearms for their own use. We don’t think a 22 LR carry pistol is the best choice when there are 32 ACPs, 32 Magnums, 38 Specials, 380 ACPs, and so many other choices, and we say that, but we review 22 pistols for carry and home defense anyway, because people generally know what they’re comfortable shooting and carrying. But we express our reservations regardless, and let the buyer beware. In the case of 9mm vs. 380 ACP and 30 SC, much like 38 Special and 357 Magnum, you get a lot of utility and price breaks by buying a 9mm, and then choose your terminal power levels by looking at certain muzzle velocity and muzzle energy, whereas the top 380 ACP loads can overlap only the bottom of the 9mm Luger power levels. Just FYI, we tested 12 380 ACP loads in the January 2021 issue, and 10 other loads in August 2016, and before that, seven loads in October 2010, so we recognize that the “9mm Short” round is a defensive round many people like.  — Todd Woodard

Todd, I love your magazine. Have been receiving it for years. Would you be rating the new Walther PPK/S made in Fort Smith AK? I just bought one after waiting several months for it to come in. I see the last time the Walther PPK/S was rated was in the August 2018, and it received a C rating. I hope I didn’t make a mistake. — Richard

Hey Richard: We tested two Walther PPK/S pistols in that test, a new one made in Fort Smith, Arkansas, and a used one made in Germany. I, too, have owned a PPK/S, which I eventually sold because of issues related to the model itself. Mainly, the sights made it hard to shoot well, it was heavy for caliber, and I had trouble making it run consistently. Was that a mistake? No, I wouldn’t call it a mistake. I enjoyed shooting the pistol while I had it, and I carried it some. But are there better choices in 380 ACP out there? Yes, I believe so. In the August 2018 test, for example, the Smith & Wesson M&P 380 Shield EZ 180023 380 ACP got an A grade. We said of the handgun, “The Shield is EZ-ily among the most useful and attractive 380 ACP pistols we have tested. The Shield is a good choice for home defense for those who cannot handle a caliber larger than the 380 ACP. As a carry gun, it isn’t smaller than some 9mm Luger handguns, but it is much easier to fire well. The barrel length at 3.65 inches is the longest of the pistols tested and afforded the highest velocity and energy.” Likewise, in that same test, we gave the Springfield Armory 911 Bi-Tone PG9109S 380 ACP an A grade. We liked the Springfield 911, and said of it, “Unlike the full-size 1911 it mimics, the Springfield is suited to carrying hammer down instead of cocked and locked, an important consideration for pocket carry. This is because the small size, light weight, and good handling make for a different geometry than full-size pistols.” Of the Walther PPK/S 4796006, we said, “The Walther features excellent machine work. The action was heavy and made getting good hits very difficult in the double-action mode. The pistol was not reliable with a modern load designed to maximize the 380 ACP cartridge. We would not buy the Walther PPK/S.” Will we look at the Walthers again in the future? Yes. — tw 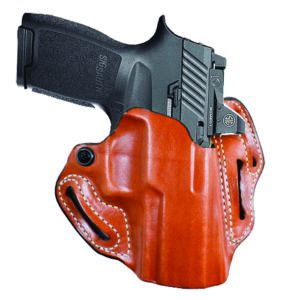 Dear Mr. Woodard, as always, you are producing great articles. This last one on holsters was exactly what I have been looking for and needed on a holster that I can wear in a side-by-side, and frankly, it will be easier to wear in my car. I do have one question, though, about the holsters for optics on the guns. Because the holsters are cut a little shorter in the front, where you have to clear leather to draw, was it a little faster to draw with those holsters? Or was it not enough to actually tell any difference? Thanks, and thanks for producing the best and most interesting gun magazine on the market. — Don 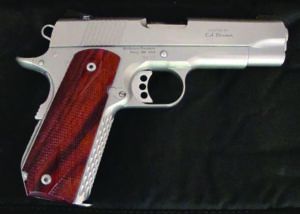 I have been a subscriber for several years; in none of the 1911 comparison evaluations that you have done have I ever seen an Ed Brown 1911 or 2011 tested. Is there a reason for this? I see that an upcoming issue will feature yet another 1911 comparison, this time “high-end” models, again absent an Ed Brown example in the comparison. Did Ed Brown make you guys mad or something? I have an older EB Special Forces Bobtail 1911 [see below left], and of course am interested in how EB 1911s would measure up in your excellent comparisons. Love Gun Tests, BTW. — Steve

Hey Steve: No, we’re not mad at Ed Brown. We just don’t do a lot of the high-end guns of any sort, and we’ve never had an EB fall in our laps at the right time. And I’ve never had a specific request for an Ed Brown before, that I recall. But we’ll keep an eye out. — tw

Todd: Many thanks for using your valuable print space to share excerpts from the Bruen decision. I’m giddy about the decision, and The Supremes’ return to the human rights text of our Constitution. Great magazine, greatly appreciated. — Phil

Phil, thanks for the kind words. I think Bruen is a very important move toward better civil rights for all gun owners, but especially those trapped in NY and CA and so on. — tw

Hi Todd, this is my first time writing Gun Tests, even though I’ve been reading and subscribing for decades. I read with interest the article on 10mm compact pistols. While I personally don’t have a need for a 10mm pistol, I understand its popularity. I noted that both of the pistols tested are striker fired. Again, personally I have no interest in a striker-fired pistol. There’s just something I find unsettling carrying a half-cocked gun on my belt or in my pocket. All of my carry pistols are hammer fired: Colt LW Commander in 45 ACP, H&K P30 in 9mm, Beretta 84BB in 380 ACP, and a Beretta 71 in 22 LR. I do carry all three at one time or another. By looking at, or tactically feeling these guns, I automatically know if they are ready to fire or not. Last, with the proper ammunition, all of these firearms are viable for self defense. Thank you for putting out one of the few firearm publications I trust. My best. — Al

I own an S&W handgun chambered in 356 TSW. I am 91 years old, and I’m afraid if I die before my 90-year-old wife, she will not know what to do with the gun. I bought the gun in the early 1990s. It has never been fired. I do not know what I can get out of it, nor how much I paid for it. Have you any idea what I should ask for it at a gun store that wants to buy it?

Thanks for your great magazine.  When it comes in the mail, I drop everything and sit down and read it cover to cover. — John

Hey John: The uncommon chambering of 356 Team Smith & Wesson (TSW) will be an issue. People generally want a gun they can buy ammo for. Even unfired, it’ll be tough to sell. Ask the local gun store to sell it on consignment with a minimum price you set. Or, you can list it on an auction site. Hope this helps. — tw