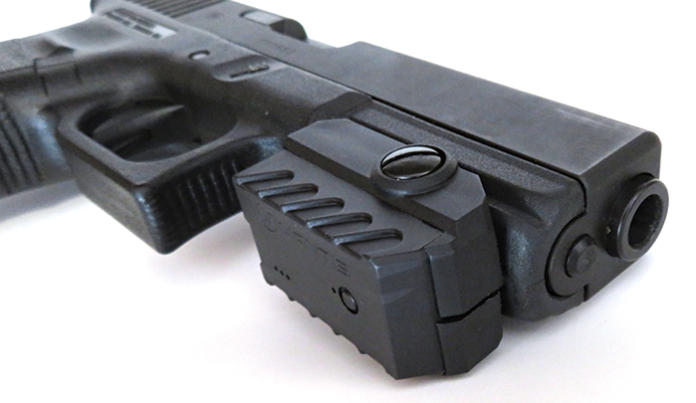 Re “Dry-Fire Trainers: Save Money While You Gain Performance,” October 2018

I’m a subscriber. Read the referenced article a while back and got a copy via email today. I’m a 4-H shooting-ed instructor, and I can see a tremendous benefit to my aspiring competitive shooters from one of these dry-fire tools. Problem is we shoot BB guns (.177 caliber) air guns (.177 caliber) and small-bore firearms (.22 caliber), and I don’t see anything available for those smaller calibers. Any ideas, suggestions or references? — Walt

There are no laser trainers for rimfire calibers I am aware of, nor for air rifles. I think the MantisX product (shown above) would work with the air guns. It will definitely work with the rimfire rifles. The guns will need a Picatinny rail, or you can purchase an adaptor. Look for it at mantisx.com/collections/rail-adapters. — Robert Sadowski

Re “Home-Defense Shotguns: Are Magazine-Feds the New Thing?” October 2018

Last year’s article regarding magazine-fed shotguns appeared in an email, so I revisited the article. The local gun store has had the Remington magazine-fed shotguns on sale since shortly after they arrived, and they’re still not selling well. Those that have sold are generally to people who want an easy-to-load gun for coyote hunting where keeping a loaded shotgun in a motor vehicle is not lawful or in homes where they want their ammunition and guns separate until needed. I haven’t heard any comments regarding the need to rapidly reload a home-defense shotgun and don’t know when that would be necessary in the real world. The new Typhoon F12 is coming later this year, and that may sell better based on the appeal of the AR platform. In the meantime, it appears that folks are opting for the mobility and ease of use of the traditional pump. — Mark

Mark, thank you for the heads-up. — Todd Woodard

Dear Gun Tests: I love reading your publication. I’m wondering what you would advise. I’m 5 feet 3 inches tall, and I would like to play trap and enjoy it. The guns that I’ve been using are too long and too heavy. I’d like to be able to handle the gun without it hurting and not have too much recoil. What are your suggestions and how do you rate the guns that are on the market right now? Thank you for your assistance. — Deborah N.

Hey Deborah: Let me describe some general things to look for, and then we can get into specifics. You should look for a gas-operated semi-auto, which uses some of the gas from ignition to run the action. Also, a single-barrel shotgun will have less weight out front than an over/under. Get one with removable chokes, and make sure you get the Skeet or Cylinder choke tube.

Now to gauge. You can buy a 12, 20, or 28 gauge. Avoid the .410 bore. It has the least recoil, but it doesn’t throw enough shot in the pattern to have a lot of “fun” shooting trap. The 12- and 20-gauge shotguns will offer a wider selection of loads, which means you’ll be able to buy ammunition more affordably, which is a factor. You can also buy light shot charges and light powder charges in 12 and 20 gauge shotshells to mitigate recoil. Barrel length can be 26 or 28 inches. The 12-gauge receivers will be bigger, so a smaller-scale 20- or 28-gauge receiver will drop weight and improve handling for someone of your size. Ideally, you’ll get one with an adjustable stock so you can have it fitted without having to go to a gunsmith to bend the stock.

So, by applying those filters, you can narrow the choices to a manageable number, then try to shoot them and see what you like.

We did evaluate beginner trap guns in the January 2010 issue, looking for a choice to get shooters into the action for less money. Not withstanding my suggestion above, in looking for a suitable trap gun, we found that pump-action models were the most economical. They were the Ithaca Model 37 Trap FL3712-30BTR, $995; and the Browning BPS Micro Trap 012241404, $759. Each of these guns were bottom-eject models, contributing to their appeal to both right- and left-handed shooters. In addition, we came across a single-barrel break-action model from Harrington & Richardson. This was the Topper Trap shotgun SB1-30T, $360.

Just had to write, folks, about your comments on the Rossi R92 in the May Gun Tests, where on page 19 you say, not stellar accuracy, but the Rossi is quite capable of MOP (minute of pig). I got a great laugh out of that one.— Kevin

Below is my go-to gun when things go bump in the night. Mossberg Shockwave in 12 gauge, Op-Sol Mini-Clip to make shooting Aguila 1.75-inch shells reliable, and a Crimson Trace Lasersaddle (LS-250G) with green laser. I just put the laser on this morning; it was easy to do. The Shockwave is reliable with Op-Sol’s new improved Mini-Clip and now holds 8 rounds. Thought you’d like to know. — Mark

Hey Mark: That sounds formidable, but easy to handle. I’m getting increasingly interested in the laser attachment. It allows so much flexibility with these short shotshell-firing guns. Thanks for sharing. — tw

Gentlemen, as a subscriber since 1999, I thank you for your continued quality publication. I have always kept a handgun of some type within reach of my bed for home protection. But I now have grandchildren who visit often and are big enough to get into trouble, and I am very concerned about gun accessibility. Before any of the children arrive, I secure my handgun in my vault. Could you please review bedside gun storage options that would allow me to keep a single pistol or revolver readily accessible if needed, but safe from inquisitive children? I would trust your testing and reviews over the ads and opinions found online. Thank you. — Joe

Hey Joe: Yes, I have four such safes in house that have been reviewed. Just need to get them photographed and paginated. It will be a couple of months before you see it. — tw

Dear Gun Tests: I really enjoyed your superb 22 rimfire article. I know that you cannot include every load, but next time please include the new CCI all-copper 22 rimfire load. As a “no lead load,” it might be desirable for use in indoor ranges. I also enjoy Barnes’s copper bullets for hunting, and I am looking forward to trying the CCI 22 copper rimfire if its accuracy is good. Thank you again for the wonderful magazine and terrific articles. — Alan

Your excellent publication provides very useful information on a variety of shooting topics. The June 2019 comparison of 20 22-caliber rimfire loads as fired from a 6-inch M17 S&W revolver provided a useful beginning to a probably two-part evaluation of this type of ammunition. The obvious second part will be a comparison of these loads as fired from one or more bolt-action rifles. While different rifles are said to “prefer” different loads, selecting a representative sample of recognized once- and currently popular rifles such as Winchester M69, M52, CZ452, etc., could help to show both the performance of the various reasonably priced ammo loads and the individual preference of the various rifles.

For our annual 50-yard shooting contest at a private campground, all contestants use my Winchester M69 rifle with Redfield aperture rear sight and globe-type front sight with a post insert. A five-shot group into a standard 50-yard bullseye target is scored by group size. Shooters sit at a shooting bench and support the rifle with their elbow on the carpeted surface. I have settled on CCI SV 40-grain as the ammo type that suits this rifle, and that load has been very reliable as well as reasonably priced and readily available. Keep up the high-quality work.— Jim

I was very interested in the testing of the various rimfire loads. I was surprised a revolver was used for the test. Some loads may respond differently to the jump, gap, and forcing cone of the revolver that in not present semi-auto. If you do more testing, I would like see a comparison using an accurate bolt-action rifle.

Due to powder burn rates, performance in a short barrel can’t be extrapolated to a long barrel. My Savage is quite accurate at 100 yards using Remington Truncated Cone Viper. That load hasn’t been available for a while, but I see it’s on the shelves again. I would like to know how it compares to other loads.—Bill