In this same class, the TNW Firearms Aero Survival Rifle seems to have been available since at least 2014, with mixed reviews. It has a competitive price, breaks down into barrel and receiver, and is available in several pistol calibers. I use mine for plinking, trying different add-ons, such as a suppressor, different scopes, fold-down sights at a 45-degree angle, etc. It is fun, but the gun could stand some improvements, and using your objective testing process to identify those improvement would be useful for consumers and for TNW. — Alan

I was able to get a Ruger PC Carbine in a special run done for Davidson’s. The barrel and receiver are done in Barrett Brown, and it really sets off this carbine. I’ve run it some on the Ruger magazine without a hitch, and then switched over to the Glock mag well — simple to do, and because I have two Model 19 Glocks, this is a no-brainer. I’m convinced it is a winner. — Varmint1

Ruger’s takedown feature makes it a U.S.A.-made winner. We need protection and firepower for the home, hiking, and camping. — Edward

I don’t know if Gun Tests has an issue with Kel-Tec, but I’m very surprised that you didn’t include the Sub-2000 in this comparison. It’s a great carbine that can be folded down to 16 inches. I have one and love it. It’s too bad GT didn’t consider it for the comparison. — Steven

Steven: We previously tested the Sub-2000 in the March 2014 issue (40 S&W chambering), the June 2012 issue (9mm chambering), and the February 2003 issues (also the 9mm chambering). Readers can consult those issues online or type “sub-2000” in the search window in the top-right corner of Gun-Tests.com to pull up these articles. — Todd Woodard

I’ll never buy a Ruger or S&W, or for that matter, any revolver, without running a competition-grade, well-lubricated range rod down the barrel to check for a choke point where the barrel meets the frame, or for bad timing. You would be surprised what you will find. I have read that Ruger will no longer repair the choke, as it is so common on their firearms. I would like to be wrong about that. — PCmacd

“Different Firing Pin Designs: What They’re Called, How They Work“

Articles like this give us who subscribe to Gun Tests the advantage over those “You Tube educated gunsmiths.” With information like this, we can walk the walk and not just talk the talk. — WyldBill

I have to agree with the others commenting about this article. I love these tech articles and save all of them to a folder for future reference. Knowledge is a wonderful thing. Thanks again for a wonderfully informational article. — jt5828

To other Gun Tests Readers: “jt5828” and the others are talking about an article published in the Straight Shooter e-letter, which Gun Tests staff distributes two or three times a week. We cover a lot of topics outside head-to-head evaluations because space isn’t an issue in an electronic publication, and we send technical material from American Gunsmith magazine in Straight Shooter as well. It’s free, so I encourage readers to sign up for it. We ask for your name and email, and we never sell the list or rent it. To navigate to the sign up page, enter Gun-Tests.com in your browser window. At the very top of the browser, click on the “Free Newsletter” tab. Then fill out the registration window. Free free free. — tw

Dear Todd, I love your magazine, but I’ve been curious why the highly touted SIG Sauer P365 has never been evaluated by your magazine. I know early production ones had issues. SIG claims they’ve corrected this. The P365 I bought, which was made 9/18, has gone back to SIG. After 500 rounds, I’m still having failures to go into battery. What gives? Bad engineering? — Steve

Hey Steve: You’re right, we’ve overlooked it. I’ll get one in the works. And thanks for the heads-up on the battery failures. We’ll be looking for that. — tw

Would you folks ever consider doing a comparison test on various types and brands of bore-sighting tools? I think it would interesting to see how the different types of tools — the cartridge laser types that chamber like a loaded round, the arbor laser types that slide into the muzzle end of the barrel, and the arbor optical types, along with magnetic types.

Also, how they work on different firearms: semi-auto handguns, revolvers, rifles of all types, especially battle rifles with flash hiders, shotguns, etc. By the way, great publication. Gun Tests is one of only two gun magazines I subscribe to. The other is an NRA publication I get as a member. Please keep up the good work. — Kevin

Hey Kevin: Absolutely, we would test these devices. Thanks for the idea. — tw

I have one of the Scout Squad versions with a walnut stock. To scope it, I used the factory mount with an old Redfield Wide View scope and low rings, which set the scope right down where it belongs for a comfortable head posture with a traditional stock. It is rock steady and delivers sub-MOA groups. It does use the charger guide dovetail as an anchor. The only drawback is that the scope/mount must be removed to service the receiver and chamber. One tip: Use a torque wrench and the recommended settings when remounting it. It will pretty much stay in register. Love your magazine. — Bruce

Thanks for the review of the 10mm semi-autos. The timing could not have been better. I am a 1911 bigot, but I am now in the market for a higher-capacity 45 ACP and a 10mm semi-auto. After handling/firing them at a local dealer, my personal preference was for the Springfield Armory XDM 5.2 Competition. But further investigation of the XDM 5.25 competition models showed the lack of OEM and/or third-party custom accessories. Nothing could be worse than purchasing a firearm and finding out months or years later that a replacement barrel was not available. What I would like to see in conjunction with your current reviews is a weighted value that would reflect the readily available accessories for the platform being evaluated, and the score adjusted accordingly. Thanks for the great magazine. — John

Dear Todd: Thanks for your articles on sub-gauge Shockwaves and the Cowboy 357 revolvers. I have been and am interested in the 357 single-action army, but with the transfer bar. I grew up using the transfer-bar system on all my revolvers, but I didn’t like the 5-shots-from-6-holes loading routine the old-style SAAs required. I know the routine, and used them, I just didn’t care for the reduction in capacity. I have four of the Pietta revolvers, two of the Traditions production, which are one of the few outfits selling transfer-bar revolvers, along with the big boy Ruger. I like the smaller frame of the Traditions revolvers over the Ruger. I have to agree that the Sheriff’s model isn’t as accurate as the longer-barrel six shooters I have. I have experienced extraction problems on one chamber of one revolver’s cylinder. It took 250 rounds to loosen it up, and another 250 to get that one chamber to extract and eject without banging on the ejector rod. The other two problems I had, which you evidently avoided, was the initial takedown and removal of the cylinder pin and cylinder. Try as I might, the main cylinder pin is a b*tch to get out. I have had to pry or tap the pin out with a screwdriver and hammer. I then went so far as to buff the pin down, which doesn’t work well with a stainless-steel pin, and then used some emery cloth on the center hole of the cylinder, and also on the sticky chamber of the other SAA. New guns just do not come apart easily. The other thing you didn’t mention was the loosening of the screws on the revolvers. I have shaken loose trigger guards and grips, as well as most other screws on the guns. If you get a new Pietta revolver, stop and tighten up the screws at 100 rounds, and every 100 or so after that, or you will be calling Italy to have them send more screws.

I plan on buying a 410 Shockwave to hang on a coat hook by the back door, something the wife and kids can shoot for snakes and other varmints. I may be interested in the 20-gauge version if the 410 works out. Keep up the good work. — Mike 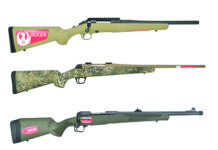 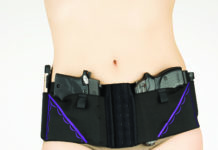 A Second on What Women Want 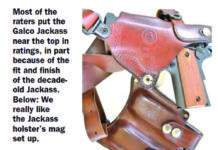 A Jackass? Yes, an Older One