I’m looking for some data on the effectiveness of MechTech Carbine upper in conjunction with Glock 17. Have you ever tested this combination? If not, I would find it very interesting to see an evaluation. — Stephen

Hey Stephen: Yes, in the June 2012 issue, Bob Campbell compared a MechTech Systems CCU Glock 9mm (Grade B) against a Norinco UZI 9mm (F), a Thureon Defense Carbine 9mm (A) and a Kel-Tec Sub 2000 Carbine 9mm,  (A- and Best Buy). The MechTech upper and installed on a Glock lower are shown at right. From the review: “The CCU Glock 9mm wasn’t a firearm at all but was rather a conversion unit. By removing the slide of the Glock and fitting the receiver into the MechTech conversion, you have a light, handy carbine. When assembling the Glock conversion, it is vital that a piece known as the Glock Block be included. This piece ensures reliable feeding and takes the place of the Glock’s integral feed ramp, once the barrel is removed along with the slide from the original pistol. There was no manual safety.

“What’s left was the Glock double-action-only trigger action and the Glock trigger lever. The MechTech conversion worked well, was reasonably fast handling, and proved accurate. The problem is that you have to have another firearm to make this one ready. We can see a shooter who normally carries a Glock 9mm using this conversion for small game or predator shooting. Or, if you are camping or staying at a cabin, you may wish to have something more formidable on hand than a pistol. The MechTech carbine was simple to set up and greatly increased the practical accuracy and hit potential from that of the handgun. Like each of our test carbines, we recommend keeping the MechTech ready for home defense with the chamber empty. Even though the Glock itself is safe enough when fully loaded, a carbine with a dissimilar sear and bolt arrangement is a different matter.

“The MechTech conversion is an interesting option that adds to the utility of the Glock pistol without any legal wrangling. No paperwork was involved because it is not a firearm. The base price was reasonable, in our opinion, for such high quality. But adding a fixed carrying handle rear sight, post front sight and adjustable stock did increase the price of the conversion over the MechTech base unit’s cost.

“Our Team Said: This was a good conversion, but the result was less practical than our other test guns, which were full-time carbines. However, for what is basically a gun part to win a B rating against a purpose-designed carbine such as the Thureon was, in our view, most impressive. If we were comparing conversion units, this one would get a solid A+, our testers said. The MechTech Systems Carbine Conversion Unit for Glock is one accessory that is difficult to ignore.” — Todd Woodard

I was inquiring if there has been a review of the Savage 110 Ultralite with the Proof Research barrel. Also, who truly makes the best carbon-fiber-wrapped barrels? — Chad

Hey Chad: Good idea. Thanks to your note, I’m looking into an Ultralight Factory Rifles angle now. Perhaps we’ll learn more about the expensive option of carbon-fiber-wrapped barrels from companies like Carbon Six, BSF Barrels, Bartlein Barrels, and others, such as Christensen Arms. In the January 2021 issue Joe Woolley examined a Christensen Arms Ridgeline rifle (shown above) with the company’s carbon-fiber-wrapped barrel. It shot 0.88-inch to 0.47-inch groups in the 6.5 PRC chambering. That will be hard to match. Thanks for your interest. — tw

Will this rifle [shown below] be reviewed soon and maybe compared to the Winchester, Ruger, and Savage rifles recently reported on? — Michael 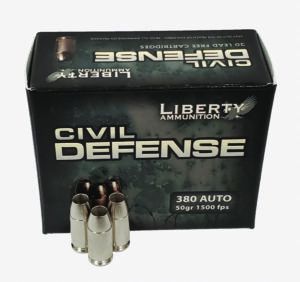 Hello, Todd. I wondered why you did not test Liberty Civil Defense [pictured above]. It is a 50-grain bullet rated at 1500 fps. It seems like it should beat out the others you tested. — Bob

Hey Bob: I will forward your ask to Bob Campbell to add to the list. We don’t intentionally ignore any ammo makers, but we are limited by budget and availability at the time of the test. — tw

I have been receiving your magazine for a few years now. I like the way things have progressed on how you evaluate firearms, ammo, holsters, and so on. A few years ago I found a brand of ammo that I really like for self defense and hunting. They use the Lehigh solid-copper projectile. Using Lehigh bullets, I have killed whitetail deer with my 10mm Ruger Super RedHawk and my Marlin 1895 GBL. I will tell you, nothing has walked or run away. They drop dead in their tracks. It is a little bit on the expensive side, but if it does the job, who cares? Maybe in a future issue you can try out Underwood Ammo. I think some of your readers may like this as well as I do. –Philip

I read the letter about compensators and your response. I have a Glock 35, and I purchased a four-port Storm Lake barrel [shown below] for it and did some experimenting. I did notice a difference in recoil when switching between barrels, but the one “negative” I discovered with the ported barrel was that after firing about 10 rounds, I could no longer see the white dot on the front night sight. All I could see was the blackened sight blade because the gases coming from the ports covered the sight with carbon. I was able to use a cloth and remove the carbon buildup to expose the dot, but after another dozen rounds, the dot was covered again. — Jim 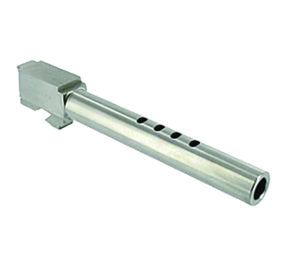 Hey Jim: Thanks for the insights on compensator use that we didn’t mention in the February 2000 issue. Using the feature is definitely a lifestyle choice because ports have trade-offs that shooters need to know about. — tw