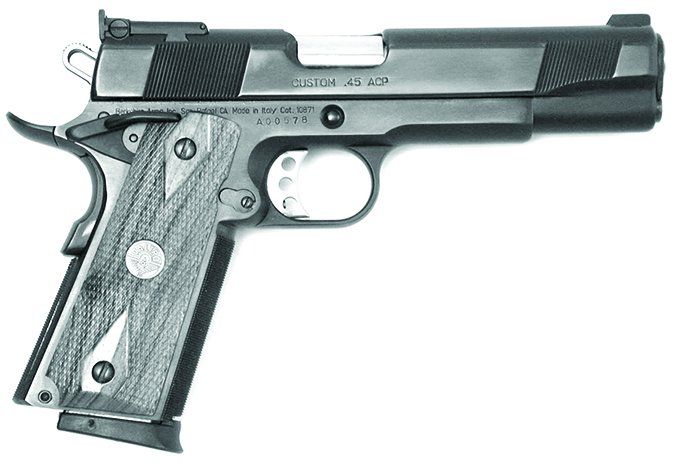 Like Grant said in last month’s letters section, I, too, lament the passing of the pride of custom-gun ownership and the common look of the Ubiquitous Black Gun. But, as was said, black guns are cheap and proven reliable. Also, I cannot justify carrying a nice custom pistol on the off chance that I might have to use it. In that case, I would have to surrender it to the police, and then it would be months at a minimum to maybe get it back by jumping through their hoops. Yes, I would rather carry a “Rolex”-quality sidearm, but I often think that if I had to give up my Valtro, I’d don’t know what I’d do.

A black gun I can give up with no emotion, and go home and get another one. I always enjoy the magazine, from the editorial remarks to the last page. — Dave

On page 32 of last month’s issue, you mention the Walther PPS M2 as a coming new product. I would like to know the approximate cost. – Dan

Sorry about that price omission. Walther hadn’t released a price at the time we assembled that data. Upside: This new gun is supposedly shipping to distributors already, but only in 9mm. The 40 S&W version is supposed to come out later this spring or early summer, said Everett Deger, director of marketing at Walther America. MSRP is $469 for the base M2 and $499 for the M2 LE edition with phosphoric sights. Magazines will come in 6-, 7-, and 8-round capacities. We found an online listing for the pistol on Kentucky Gun Co.’s website, KYGun.com, for $407 with one 7+1 magazine. Upside: Prices have dropped for the M1 edition, with some listings around $350. We tested the 40 S&W-chambered PPS M1 in the October 2009 issue, giving it an A-, along with the Springfield Armory Enhanced Micro Pistol No. PI9240LP and Kahr PM40 No. 4043. Of the PPS, Contributing Editor Roger Eckstine wrote, “If you’ve been carrying a high-capacity polymer pistol, the narrow PPS will be a revelation. Double-action-only aficionados will take to it immediately. Extra magazines are pricey, but the shorter five-round magazine will better adapt the PPS to ankle carry or other deep concealment. For summertime carry or as a matching backup piece, the PPS may be hard to beat.” In the October 2008 issue, Roger tested the PPS in 9mm (WAP10001), and said of it: “The PPS suffered three malfunctions as shown within the first 150 rounds. All three malfunctions occurred while feeding from the supplied seven-round magazine, which featured an extended basepad. We switched to the six-round magazine with flush-fitting basepad and fired more than 200 additional rounds. No further problems were encountered. The individual seven-round magazine may have been the cause, or there may have been another problem that the mechanism was able to overcome simply by using the six-rounder. We liked the PPS, and if it continues to run reliably, we are satisfied with 6+1 capacity in a backup gun.”— Todd Woodard

I have read and subscribed to Gun Tests for many years and enjoy the reviews. I carried a Glock for many years as a federal law enforcement officer, now retired. I have shot various models of Glock, and I thought your review of the Glock 43 9mm pistol in the August 2015 issue was a fair treatment of the handgun.

Hey Ben: Thanks for your insights, and I appreciate you letting me know you don’t have a fiduciary interest in promoting the EMP +2 magazines. I appreciate your letting other readers know how highly you regard this accessory and how it may affect the performance of the Glock 43. — tw

New subscriber. Love it so far. I am unable to find the AR-magazine test referred to on page 5 of the February issue of Firing Line. How do I get to that article? Thanks. — Clark

Hey Clark, sorry you’re having trouble. You can get to that test in one of two ways. 1) Use the search function in the top-right corner of the website homepage. You can type in any of the unique character strings, such as “MAG55630BLKP” (no quote marks) from the article and hit “search.” That will take you to the online version that’s resident on the website. It’s the third listing, “AR-15 Magazine Testing: Price Has Little to Do with Quality.”

2) Or, if you come in through the homepage, go to the right column, about halfway down, and click “Back Issue Archive.” Select “2014” as the year in the Archives pull-down window, click “Go,” then click on the May 2014 issue in the second row. You can either click to read the story online or download the issue as a PDF. — tw

Thanks, Gun Tests! When I read the September 2015 issue, y’all alerted me to a safety problem with my “truck gun,” a Taurus Millennium 45 ACP compact pistol. I contacted Taurus. They denied having a safety problem, but they sent me a shipping label for my handgun. I returned the pistol to the factory on October, 5, 2015. Four months later I didn’t have the pistol back, so I checked my gun’s status on the website, and it said, “Repairs Complete.” Still no gun.

I called Taurus. Spoke to a lady representative who informed me that the web info was inaccurate. My gun was not repairable, and if I sent them an FFL to ship to, they will send a replacement. Cost of the FFL transfer for me is $25. I complied with her instructions. February 23, no gun. Called the factory for a status update, and learned the replacement was not shipped because I did not specify what model I wanted. Maintaining my cool and informing the agent that I did not have a catalog from which to pick a replacement, he gave me a verbal description of the choices, and I picked a Model 247 G2 compact. I asked him when I could expect the gun to be delivered to my dealer, and his reply was four to six months. I do wonder if my holster and extra mag will fit the replacement. I doubt it .

I am out close to $400 with little choice but to wait another six months. However, I can tell other Gun Tests readers about this. I subscribe to several gun magazines, and Gun Tests is the only source reporting anything about this situation with Taurus. — Lou

Hey Lou: I can’t speak for what other publications do, or don’t do, regarding this settlement. But I do have some sympathy for Taurus because the terms of the settlement, according to court documents, had to be worked out with the plaintiffs and the court, so their hands were likely tied. In fact, in the matter of Carter v. Forjas Taurus, S.A., the court has continued the hearing on final approval of the settlement until July 18, 2016. The claims period will not begin until after that time has passed. Additional details will be posted to a website, TaurusCarterSettlement.com, including various settlement offers, which include receiving a payment of up to $200, repairing existing guns, or replacing them as necessary, as you found out.

Thanks for letting the Gun Tests community know about this, and please let us know the outcome. If you don’t get your gun back inside the delivery window they promised, let me know that as well. — tw