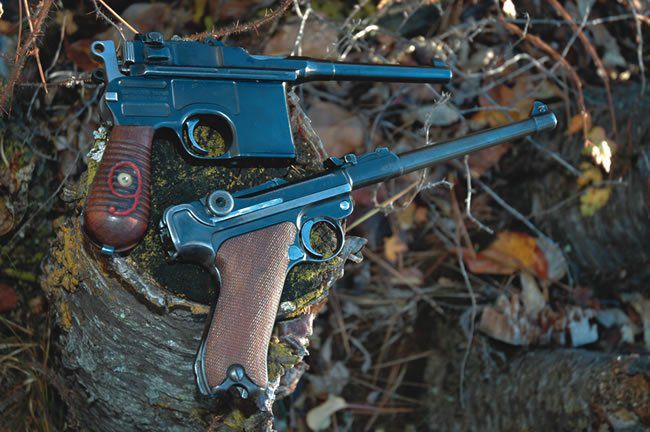 I very much enjoyed the article on the Luger versus the Broomhandle Mauser. My Dad had a Luger with both uppers, artillery and short barrel, which my brother has now. It was, and is, a great shooting weapon. Dad was in the 483rd Bombardment Group of the 15th Air Force and remained in Europe with the occupation until the Japanese surrender. He had the chance to pick through a warehouse of weapons and recounted how the late Lugers would blow the toggle bolts when submachine-gun ammo was fired in them. He settled on a 1917 Crown, which would digest anything. I can recall that he picked up several thousand rounds of really hot German 9mm out of Canada in the 1960s, which we fired up. I recall firing some at a concrete block about 100 yards away, which was about 1-foot square, and hit it with regularity. The hold was 6 oclock with the artillery barrel, two-handed offhand hold. My recommendation for ammo is a bullet weight of 124 grains as hot as you can get it for pre-WWII Lugers, loaded with military ball-type bullets. The Luger never malfunctions with the German military ammo of the time, at least not the submachine-gun ammo. It would malfunction with American ammo that was not hot enough.
– Ken Brewer

I was very excited with your January 2015 edition due to the story on the Artillery Luger and 1896 Mauser Broomhandle handguns. It did not mention any special license for these handguns with stocks. I was under the impression they had to be registered as short-barreled rifles. If there is no special license needed, why can the Russian PPS-43c not be imported with the stock usable? Is it because it is modern made? I enjoyed the story on these two pistols.
– Ken Bealer

This is posted on the ATF website: If a person has a pistol and an attachable shoulder stock, does this constitute possession of an NFA [National Firearms Act] firearm? The BATF answered, Yes, unless the barrel of the pistol is at least 16 inches in length (and the overall length of the firearm with stock attached is at least 26 inches). However, certain stocked handguns, such as original semiautomatic Mauser “Broomhandles and Lugers, have been removed from the purview of the NFA as collectors items. [26 U.S.C. 5845, 27 CFR 479.11] As you can see, it does not mention anything about whether or not the stock is original or a replica. There is other correspondence on the BATF website that addresses that question in detail. The best advice is to check with the seller about whether the gun is an NFA item or a C&R, and also check your local and state laws, which may be more restrictive.

I concurred with Grade D rating of this pistol. Only those who are really interested in Mauser Broomhandles should consider buying one, because they are not for the faint of heart.

The only thing about this article that I would like to add is about the Mauser Broomhandle. The article incorrectly identified it as Mauser 1896. I believe this one is a Model 1930, identified by the step on the barrel and different safety. The reference came from the Mauser self-loading pistol book by James N. Belford and Jack Dunlap. I happen to own this particular model and know that the only part that is not interchangeable with the standard C96 is the safety. The safety, once applied, allows you to manually drop the hammer (with great care of course). The safety, once applied, will push the back of the firing pin into the rear of the bolt, and when the hammer drops, it will not touch the firing pin. This improved safety system rectified the problem that was mentioned in the article about the safety having to be disengaged to lock the bolt back. I had a negligent discharge with my C96 once during my attempt to lower the hammer while putting the pistol on safe. The M1930 safety will decrease the chance of such an accident, but even so, I adhere to the safety rule and keep the pistol pointed in a safe direction at all times. To my knowledge, the only place that carries the M1930 safety is Sarco, Inc. [e-Sarcoinc.com]. The reproduction part is well made and works great.

The problem with failures to feed and excessive recoil can be cured with a new spring from Wolff Gunsprings [GunSprings.com]. The extra-heavy spring will cushion the recoil and reduce the beating on the bolt, but the magazine spring needs to match with the follower, too. I have installed a new magazine follower on mine because the old follower allowed the cartridge to tilt inside the magazine housing and cause some double feed.

The article mentioned difficulty in getting the cross pin that holds the bolt out. I am not sure if the writer was referring to the recoil spring abutment or not, but to get the bolt out, you have to use flat-tip screwdriver or the tip of a Broomhandle cleaning rod and push the back of the firing pin and turn it clockwise to disengage the firing pin from the bolt. After that, you can push the recoil-spring abutment forward, disengage it from the recoil spring, and wiggle it out from the frame.

I thoroughly enjoyed reading this testing classics article and would love to see that Gun Tests include a classics test every issue. The issue arrived a day after I came across a decent looking Artillery Luger with wooden stock and leather holster combo, and the only reason it did not come home with me was a $3,500 price tag – but I bet it was worth every penny.
– Thana Sathirachinda

I enjoyed the review of the S&W M&P 40c and the Beretta Px4 Storm in the January issue. Im sure that you know better, but some of your readers may not – at the end of the Beretta review you said, The Beretta was rated down because loads shot from it struck low on target, and this should be fixed with a taller front sight. I hope none of your readers attempt to correct the Beretta (or any other handgun that is shooting low) by putting on a taller front sight. That will only make the gun shoot even lower! To correct a gun that is shooting low, the front sight needs to be shorter.
– Terry Smith

From Bob Campbell: You are correct. My observation was based on my memory of the sights on recently tested 9mm and 45 ACP Storm handguns that have fired to the point of aim. In the case of the Storm 40 S&W, filing the existing front sight shorter would bring the bullets impact higher, but there wasnt a lot of sight to work with. Sorry about the mistake. Also, thanks to Gun Tests readers Loren Tilton, Phil Emore, Norm Thompson, John Gertig, and others for pointing this out. – tw

I just read your excellent article on these two CCW pistols. I was particularly interested because I subscribe to the sometimes heard USMC logic that any defensive handgun is a good one as long as the caliber begins with a 4.

Regardless of the point-of-impact problem, I would choose the Beretta over the S&W and simply modify the front sight, if necessary, because Im in favor of the Berettas decocker. Since I use an IWB holster, with the S&W Id worry about the very real anomaly that could crop up where in the heat of a self-defense confrontation, the trigger could be accidentally pulled on draw, with a double-action-only pistol blowing a hole in part of my anatomy instead of my assailants. The only solution I can think of for this problem, which may occur very rarely or maybe never at all Ill have to admit, would be to leave the double actions chamber empty and rack the slide on the draw, which to me is totally unacceptable for defensive purposes. But then I have a lot of experience with Beretta pistols, so a decocking-type safety isnt a problem for me.
– John Gertig

Whither the DB15?
I am a new subscriber. I have interest in a report on Diamondback DB15 pistol. Can you email me that information? Thank you,
– Charles Mahoney

Dear Mr. Mahoney: As a subscriber, you have access to the full back-issue archives at Gun-Tests.com. Follow the directions for sign up here. However, we have reviewed the Diamondback DB9 (9mm Handguns Big and Small: Taurus, Walther, DiamondBack, March 2012) and the DB380 (Pocket-Sized 380 ACP Pistols: S&W, Taurus, and Diamondback, January 2011), but not the DB15. – tw

Using Gun Tests Data
I have enjoyed your magazine for several years now. Using the data on your website, I put the circumference and trigger-reach data (9mm pistols) into a spreadsheet and compared them to a 1911-style pistol. I use the 1911 as the ideal based on its longevity with so little change. I could only do this using your data, so I am really glad you all measure pistols so thoroughly. From what I can see so far, it may explain why one of my friends that is new to firearms really likes the FNP-9. It also explains my attraction to a Steyr M9 and a Springfield XDM, which now I am motivated to rent at the local range. Also, the Beretta 92 A1-C is very close to a 1911 in these terms, so now I need to find one of those too. I am glad I ordered a short-reach trigger for my 92A1 – that should bring in the reach to something more manageable. The Stoeger Cougar fits better, which looking at the data, should be expected. Thought you might like to know, and keep up the good work.
– Craig

Thank you very much. We do include some seemingly oddball measurements, trigger span being one of them. It is a vital piece of handfit information, as youve found out. We may also add slide retraction effort as a standard measurement for pistols as well. Ive found that that single measurement (the external effect of the recoil spring stiffness plus mechanical drag, slide shape, and other factors) is a primary exclusion for older folks, those with diminished hand strength, and many women when theyre considering a pistol. Also, youre doing what I recommend to people who ask me what gun to buy – use our reviews to cull the herd to a manageable few, then go shoot them. I see writers at other magazines doing top-10 lists and I always ask myself, Top 10 for whom? The Gun Tests staff really does want to recommend the right gun for every single reader, but we know thats inherently impossible, a Sisyphean task. So, instead, I imagine an informed GT reader looking at a review of a pistol he or she is interested in purchasing, comparing the objective data, seeing if theres a fatal problem with a given gun, picking one, then renting or shooting a friends similar gun to confirm/deny whether our descriptions fit an individuals use of the gun. I appreciate you sending in the idea. – tw

What About the LC9s, XD-S?
Back in October, a fellow subscriber asked about a comparison between these two pistols. You responded that they had been shipped to Bob Campbell and a report would be coming in couple of months. In the meantime, I continued to load up my Cabelas credit card for the points to buy one or the other based on your evaluations. Alas, a couple of months have come and gone and no review as yet. My points are burning a hole in my pocket and cant wait to pull the trigger on your recommendation.
– Richard B. Park