Re “Three Take-down Rimfire Rifles That Are Go-Bag Ready to Roll,” January 2022

Loved the article. Brought back memories. I bought my Armalite AR-7 in 1973 as part of my Navy aircrew survival kit. Similar to the Henry AR-7 [pictured above], it only had a single seven-shot magazine. Over the years, it has made a great plinking gun. Only issue I ever had was the butt cap split and wouldn’t stay on the stock. Nothing that a little duct tape couldn’t fix. — Charlie

Long-time subscriber and really appreciate your publication. I’ve seen a lot of 22 LRs reviewed in the past few years, but I have yet to see anything on the Tippmann M4 22 [pictured below]. Any chance of seeing one of these tested in the near future? Would really like to see an honest evaluation before I plunk down my hard-earned cash on one. Thanks in advance. — BudMan

I will see what we can do. For those who are unfamiliar with the Tippmann Arms line of smallbore AR-style rifles, a Tippmann Arms M4-22 Pro runs about $550. The M4-22 Pro is a semi-automatic tactical rimfire rifle with aluminum upper and lower receivers. The M4-22 Pro is largely mil-spec compatible and will accept most AR-15 stocks, handguards, and sights. Thanks for the idea. Tippmann Arms is based in Fort Wayne, Indiana, telephone (260) 245-6155, TippmannArms.com. — Todd Woodard

Re “Garands Gas Plugs: We Test for Function, Safety, and Accuracy,” June 2021

Just a few remarks on the Garands. First, never use a 30-06 round with a bullet weight of more than 180 grains. The Garand rifle’s gas system was designed to use bullet weights between 150 and 180 grains. Failure to heed to this can seriously damage the operating rod and gas components. The 50,000-psi maximum should be adhered to at all times. Most WWII Garands, when returned to the U.S. after the war ended, had to have their barrels replaced because very corrosive ammo was standard issue. Just about any WWII Garands that have original barrels were most likely “rack queens” that saw little or no action.

As a point of interest about U.S. M1 Carbines, most will have their original barrels because all U.S. Carbine ammo was non-corrosive. (Hint: Avoid French and Philippine ammo; very corrosive.) As I understand it, the short-piston gas system functioned best with non-corrosive ammo.

As for the much-advertised Garand “ping” noise, it’s mostly BS. A close friend of mine was a machine-gun section leader who fought in Africa, France, Belgium, and Germany. He said that in nearly all the actions he was in, the din of combat precluded hearing the “ping” more than a few feet away. He used his Garand as a spotter rifle, shooting tracer rounds to direct his gunners where to fire. — Dwight

Re “Springfield Armory Rifles: Which to Collect?” December 2021

To Joe Woolley: I really enjoyed your article because it brought back memories of firing the M14 when I was in the Army in 1970. I joined the CT Army National Guard in 1970 and went to Basic Training at Fort Knox, KY. At that time, the M16A1 was the standard infantry rifle, so most of our many hours of rifle training were with the M16. However, National Guard troops were required to also fire and qualify with the M14 because many National Guard companies at that time had Army-surplus M14 rifles in their armories. I liked the M16 for its light weight and low recoil, but I was somewhat put off by the fact that the rifle was made primarily with plastic and aluminum parts. When issued an M14, I immediately liked it because it was wood and steel and had better sights than the M16. The M14 I was issued was a good shooter, and I had no trouble qualifying with it. I recall that we had to shoot at small silhouette targets at different distances from 50 to 300 meters. After shooting that M14, I liked it so much that I wished I could take it home with me. — Paul

I got my first Blackhawk in 1956, and with cast bullets I was hitting white stones on a railroad embankment offhand at more than 400 yards. I shot IHMSA in the early 1980s with my Super Blackhawk and won almost every shoot in Ohio. I shot groups you show at 200 meters. Granted, I figured out what a revolver needs by years of work and thinking. In no way, shape, or form could I make a Bisley shoot as good as a hog leg. I even went on to design my own bullets and make my own molds. After an IHMSA shoot, I had two shots left, set the chicken at 200 meters and hit the leg. Open sights.

I do not promote long-range handgun hunting, but I have taken deer to 120 yards with the 44 Magnum. Today, the BFR revolvers are the world’s most accurate overall. I would like to see a test of them.

By the way a 44 Magnum does not want a magnum primer, no matter the powder. Magnum primers only start at the 475 Linebaugh. I use Federal 150 primers in my 44 Magnum loads. — Name Withheld

I read your article on the Ruger Super Blackhawks with great interest. I acquired my first one in the early 1980s. This was a 7.5-inch-barrel model. The next was a 10.5-inch-barrel model suitable for metallic silhouette shooting out to 200 meters. Both of these revolvers were very effective in this sport and have harvested numerous deer. Both of these Rugers have been fired with hot loads and show no signs of problems. I have replaced only two parts in these revolvers, which is proof of a good design. The third Super Blackhawk has a 5.5-inch barrel, a fluted cylinder, and a rounded trigger guard on the back. This is a good gun to carry as a back up when deer hunting with a rifle. Over the years, these guns have fired lots of cast bullets. They are still being used with iron sights. It still is fun shooting these metal handguns instead of the plastic ones. — William

Todd, I contacted you several months ago re the election of the NRA Board of Directors. I’m thinking that the reason you did not respond is that, as the editor/operator of an industry-leading publication, you are in a precarious position. However, those of us “rank and file” members who are not in the industry really have no clue as to which board candidates have our best interests at heart and which ones are simply “LaPierre stooges.” I believe that Wayne LaPierre is living a luxurious lifestyle off of our contributions, while being supported by at least some of the board. I’m sure there are some good board members, but I’m sure many of the good ones have left, because they are probably in the minority. I’m watching our rights be eroded and chipped away more and more every year. We need an NRA with strong leadership that will stop compromising, stop putting the group in situations that cause legal jeopardy, and will actually lead and plot a strong course forward for our cherished organization. Can you help us, the uninitiated and uninformed membership, find a way forward from this point? I understand if you feel uncomfortable “naming names,” but provide us with info that helps us make intelligent and meaningful choices for our NRA leadership. Thank you sincerely. I just renewed for two more years! I look forward to every issue of GT. — Scott

Hey Scott, thank you for writing. I didn’t respond because I had no idea which candidates to recommend. Gun Tests the magazine doesn’t have any conflicts that prevented me from responding, and neither do I personally, other than my lack of knowledge. All I did on my ballot was not vote for anyone who was already on NRA’s BOD. Baby and bathwater. Both the executives and the existing board members are complicit in letting things get out of hand, for years and years and years. I’m watching the legal proceedings in NY state, and I can only comment that NRA’s governing members of all stripes effed things up thoroughly. It’s embarrassing. I will also note that I don’t contribute to NRA fundraising efforts any longer, and I’ve routed my political and legal donations to other groups, notably the Second Amendment Foundation and the Firearms Policy Coalition. — tw 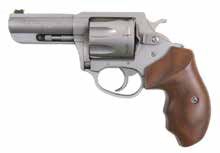 Just got around to your review of the Charter Arms Professional 73230 32 H&R Mag. I don’t understand what y’all mean by a “typical Charter Arms trigger?” I’ve a pair of Bulldogs in 44 Special, a snubby and a target model. My Bulldogs have superlative — no, DIVINE — double-action triggers that are infinitely shootable, more so than any other factory-triggered revolver I have ever experienced. They are a delight to shoot. The Bulldog single-action triggers give my factory S&W 629 and my Dan Wesson 357 triggers a run for the money. Just sayin’. — PC

Hey PC: The triggers on our Charter Arms samples have not been so divine as yours, as the 32 Magnum reviewed in that issue was not. Contributing Editor Robert Sadowski wrote of it, “The trigger is typical Charter Arms, meaning it is gritty and smooths up with use. When we first acquired the Professional, we dry-fired the revolver until our trigger finger ached, then used our support hand until the support-hand trigger finger ached. Suffice to say, we dry-fired the Professional a lot.” In the May 2018 issue, Sadowski wrote of the Charter Arms Pathfinder Lite Model 72224 22 LR, “The DA trigger pull was 14 pounds on average, and that was too heavy, in our opinion. We also could feel the trigger stacking just before the shot broke.” In the October 2016 issue, we said of a Charter Arms Bulldog Classic Model 34431 44 Special, “The double-action trigger was a bit gritty to start, but smoothed up after use and measured 12 pounds.” So that’s what we mean by “typical.” But it’s not all bad news for the Charter triggers. In the April 2018 issue, we tested a Charter Arms Boomer Model 74429 in 44 Special that was better. Of that trigger, Sadowski wrote, “The DAO trigger has a consistent and smooth-ish pull with very little perceived stacking. The press requires about 12 pounds of pressure to make the Boomer go bang. The grooved trigger ensures your finger is secured on the trigger.” — tw 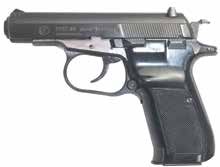 I sort of own two of your tested guns. I have one of the Israeli-surplus Beretta 84BB models, and it is a good little gun, though the slide stop is a bit worn. 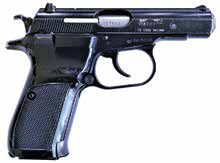 I truly love the CZ though. When the 82s were available cheaply as C&R pieces, I bought several and still carry one occasionally today. I prefer the CZ 82 to the CZ 83 in 380 Auto because I feel the former’s 9mm Makarov chambering is a better choice in terms of power. I don’t worry about spare parts because I have spare guns, but I have never had a part failure on one, and at one time, I put a lot of rounds through them.

There’s not much to wear out because they are simple blowback guns. — David